The Glens of Antrim were not too long at our backs when I put it to Brian Cody. “You can call it the Cody School...you can call it anything you want, Brian, but it would bloody well work!” 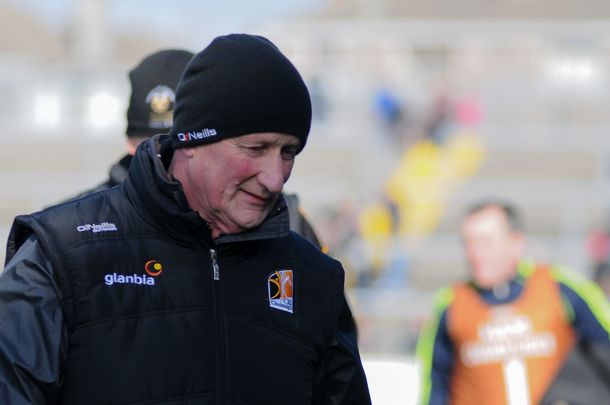 The Glens of Antrim were not too long at our backs when I put it to Brian Cody. “You can call it the Cody School...you can call it anything you want, Brian, but it would bloody well work!”

I was driving. Brian was sitting back next to me, trying to relax on an early Sunday morning after a busy 24 hours in which we tipped for 40 minutes down a peninsula in Down to be welcomed by a GAA club, made a fleeting visit to an Irish center on the Falls Road that turned into a three hour sojourn when several hundred people turned up to see him, and then hit the Glens for the rest of the evening and late into the night.

At the club in Down at the beginning of the day, Brian was asked out of the blue if, in addition to signing copies of his newly printed autobiography and chatting to everybody and anybody, he would give the girls camogie team a bit of a talk. They were playing in a final the next day.

When the door of the dressing room reopened about 30 minutes later, the first face that emerged had a look of total discovery from ear to ear.

“You missed that,” he informed me.  “I never heard anything like that before!”

Brian moseyed out with his hands in his pockets 20 seconds later. “Go okay?” I asked.

“What’d you talk to them about?”

I had published Cody’s autobiography a month after he had led Kilkenny to a fourth All-Ireland title on the trot.  It was the autmn of 2009.

The memoir was sitting on bookshelves. We were running around the country together, visiting shops and clubhouses and a variety of other establishments, and when it all finally came to a stop at the start of Christmas week I realised something interesting.

Every day we spent together Brian Cody asked as many questions as he answered.

That was one of his strong characteristics. It wasn’t that he did not want to answer questions or sought to bottle up things and deprive me of his insights or great knowledge.

It was that Brian genuinely seemed more interested in other people, and what they had to say for themselves, and what they were prepared to disclose than he was yapping on and on about his own packed life.

So, as I was saying, the Glens were directly behind us when I put it to the greatest manager there has ever been in the history of the GAA that he should not be too bothered about adding up all of those All-Ireland titles.

“When you’ve won one, you’ve won one,” I told him.  And I explained to him that winning my first (of two) All-Irelands with Meath was a life’s dream fulfilled.

That the second All-Ireland I won under Sean Boylan’s expert watch was even more important because it was like pinching myself – and realizing that I was not dreaming after all.

As Brian knew, the Meath team on which I played would lose two All-Irelands in quick succession after winning our first two. Each losing experience was dreadful, more earth-shattering and personally deflating than I could ever have imagined.

Worse than that, the two losses overshadowed in the most ridiculous and unfathomable way the two glorious victories.

“One All-Ireland is all that any man wants or needs,” I remember telling Brian. “Two All-Irelands is more than any man deserves.

“Two is the golden number.  After that,” I continued, “four All-Irelands, five or six or seven...what’s the point?”

On our drives, Brian would listen to me for long spells. I knew he was indeed listening and not ignoring my exploration of the meaning of a GAA life because he would reply to me every two or three minutes and ask a pertinent question.

Or he’d say things like, “Do you think so, Liam?” and, “Really Liam,” and he’d chuckle occasionally when I was getting on a fairly serious roll on some subject and he might say something like, “You’ll have to let me think about that!”

Obviously, he did not agree with me when I told him he was wasting his time winning more and more All-Ireland titles.

There were lots of times he said, “You think?”

“Why would you want to win any more?” I persisted, advising him that it was time he gave up the Kilkenny job, gave up his day job as a teacher also, and set up the Cody School.

“You could have 20, say 25 teams in your school at any one time. Visit with each of them once or twice a month.  The rest of the time you could have your own coaching staff visiting them, training them, talking to them.

“You’d probably need a staff of six or seven young lads and girls just out of college.

“You’d make a small fortune and you’d never have to retire.”

And all Brian Cody replied was, “You think, Liam?”

As readers of this column will know, I thought at the beginning of this summer that Brian Cody would win no more with Kilkenny before this decade closed down fast. I wrote that the 21st anniversary of his coming as Kilkenny team boss would end with hm remaining on 11 All-Irelands, 15 Leinster Championships, and nine National League titles.

That conviction of mine was blown to smithereens last Saturday evening when a young Kilkenny team (half a dozen of them had never reached an All-Ireland final) downed reigning champs Limerick by a single point. It was a thoroughly deserved one-point win.

How did the Cats do it?

“Total honesty,” replied Cody, who never looked more delighted with himself, and his team, out on the field.

He’s now got half a chance of winning a round dozen of All-Ireland titles. The count goes on, and on. The front doors of the Cody School have never been opened.

They probably never will.