Writer and film director has traveled far from the west of Ireland plays that he made his name with -- or has he? 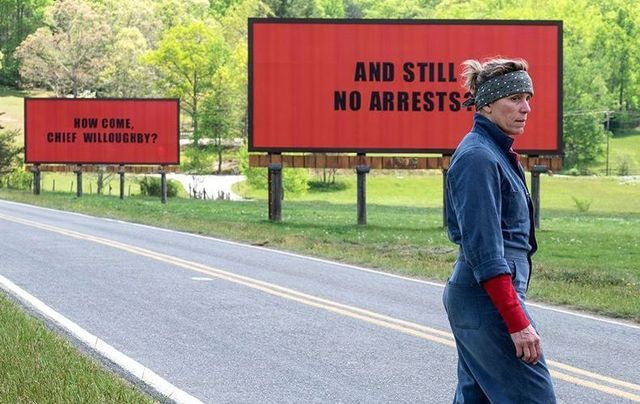 Writer and film director Martin McDonagh has traveled far from the west of Ireland plays that he made his name with -- or has he? In Three Billboards Outside Ebbing, Missouri he has written a towering role for Frances McDormand that she turns into an electric tour de force. Cahir O'Doherty gives his verdict on the latest flick from McDonagh.

Avenging the murder of a loved one is one of the oldest stories in the book. It's the starting point of countless westerns, bible epics, Greek tragedies, gangster capers, you name it.

If you're going to write another gun slinging revenge drama you better bring your A-game because it's all been done to, uh, death.  Has Martin McDonagh brought his to Three Billboards Outside Ebbing, Missouri?

To begin with McDonagh had the good sense to cast the gifted Oscar winner Frances McDormand in his latest crime and punishment flick, but he's also written what is easily his most conventionally structured drama since the early days of The Beauty Queen of Leenane.

McDormand's incendiary performance quickly draws attention to the otherwise by-the-numbers film when she's not onscreen. Alternating between riveting and rather redundant, the experience is diverting and distinctly uneven.

From the moment McDormand appears she makes the film her own, lifting the plot far above its played out tone and structure by the sheer strength of her bad-ass performance.

McDormand plays Mildred Hayes, a woman as plain spoken as her name, and within minutes of meeting her for the first time we learn three things about her: her teenage daughter has been raped and murdered, she is impatient with the slow progress being made in the case by the local sheriff Bill Willoughby (Woody Harrelson), and she is finally taking matters into her own hands in her quest for justice.

In fact, almost from the first scene, McDormand embodies the Greek goddess of justice.  She's so fixated on getting revenge she's practically standing before her small southern town holding a flaming sword of righteousness.

What's clear from the outset is that although everyone in Ebbing understands Mildred's unspeakable loss, absolutely no one wants to deal with her one-woman vendetta. Especially not the local police department which she goads into action by paying for three billboards that pointedly ask why they have failed to make any arrests in the case.

Putting up the three billboards has the all too predictable result of instantly dividing the community, starting what Willoughby calls an all out war. It's not just the sheriff but the entire police department which feels the burn, especially when the local evening news starts to run the story on air, amplifying Mildred's controversial request.

McDormand is so consumed by her pursuit, and by her grief, that she loses sight of the toll that it's taking on her surviving son who is forced to confront not just the gory details of his sister's death for the first time, but also three 20 foot reminders of every detail of it every time he drives home.

The cruelty that can arise from a barely hidden hurt is a McDonagh specialty, and McDormand bravely risks the audience's sympathy to make her character such a single minded pill.  In the process she becomes such a force of nature she's electrifying to watch.

Part of the charm of Three Billboards Outside Ebbing, Missouri comes from the realization that McDormand is breaking all the rules of cinema. She's deputized herself to be her own sheriff, she's put a bandana over her hair to conceal her femininity, she walks with a loping swagger we associate with tough guys, and she expresses herself in expletives much too rude to print here. She's not a man; she's more effective than one, in other words. It's thrilling to watch.

There is a subplot involving Sam Rockwell as Officer Jason Dixon, a racist cop who, to be honest, looks like the part might have been written on a napkin. Dixon ticks every box in the southern gothic checkbook: he lives with his chain smoking mother, he brutalizes the weak, he swills beer on the sweltering porch, he targets people of color, and he doesn't know and doesn't care what kind of man that makes him.

But Rockwell, another gifted actor, rises above this too thin material with the strength of his own performance, choosing to embody rather than comment on his dim bulb character.

Dixon's meant to represent part of the journey that Mildred is undertaking, but his about-face from bigot to better man feels forced and unconvincing. Worse, it feels sentimental.

How do you go from throwing innocent people out of second story windows to a standup guy who was just a little misunderstood in an hour?  You don't.

Just as in his early plays, McDonagh still loves to turn to a good letter to explain a character's point of view. In Three Billboards Outside Ebbing, Missouri some ostentatiously well timed letters allow the writer and the characters to move the plot along with their hoary appearances.

But having McDormand sit down one in the middle of the film brings matters to a screeching halt, as she and we are bluntly told where to look for enlightenment and meaning.  It's a lazy contrivance and it happens twice in the film, allowing McDonagh to tie up loose ends with the narrative subtlety of a brick through a window.

Thankfully McDormand's performance instincts and her chemistry with the talented cast rescue almost every scene in the film from the glib contrivances of McDonagh's plot and characterizations. Through force of will she carries the film and she elevates it too, allowing us to see depths not hinted at in the script.

But what becomes more unsettling as the film progresses is the idea that the rape and murder (and then the burning) of Mildred's teenage daughter might just be becoming a plot device to facilitate Mildred's angry rampage. We start to get the sense that the murder case might never be solved and worse, it might not ultimately matter to the film (in the sense that it really was only a plot device).

That's a bitter pill to swallow, if you think about it longer than the film seems to hope you will. What Three Billboards Outside Ebbing, Missouri is really about, it becomes clear, is how hard you have to work to grasp some meaning from the tragedy and meaninglessness of life.

Mildred finds her purpose in her quest to bring her daughter's killer to justice, Officer Dixon finds his purpose in aiding her search and Sheriff Willoughby finds his purpose in offering avuncular advice from beyond the grave. It's all very tidy, considering the rawness of what each character goes through first.

Many knockabout scenes are added to propel the action rather than the story. There are quite a few questionable moments that produce spectacle and not much more to be honest. At such times the dialogue especially among the men becomes blatantly stagey, painfully in search of laughs rather than insight.

Three Billboards Outside Ebbing, Missouri isn't exactly a masterpiece, in other words. Instead it does what McDonagh is famous for -- it indulges our worst instincts and confirms our worst suspicions, then it hands us a blunt moral of sorts and calls it a night.

But what McDormand has done is show us that cruelty has real consequences, and that they can be hard to foresee or endure, and so a film that begins as an exploration of the search for meaning in a meaningless world become something richer and finer in the hands of this world class actor.