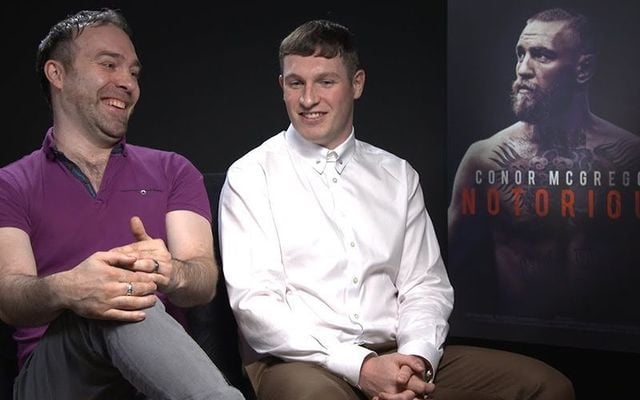 Conor McGregor's rise from the back streets of Crumlin to spectacular UFC world title fights in Las Vegas is unprecedented. In Conor McGregor: Notorious, Dublin-based director Gavin Fitzgerald charts his path from obscurity to world domination over five adventure filled years. He talks to Cahir O'Doherty about the man who broke the mold of Irish sports stardom.

You are not truly famous until you can walk onstage to a chorus of cheers and jeers. So says the now world famous UFC superstar Conor McGregor in the new Irish-made documentary Conor McGregor: Notorious, opening November 8.

Filmed over five years, it's been a long journey for both the fighter and the film. When Dublin-based director Gavin Fitzgerald first met McGregor back in 2012, five years before he was famous, he knew right away there was something about him even then, Fitzgerald recalls.

At the time McGregor was fighting in local mixed martial arts shows in Ireland, but when Fitzgerald talked to him he realized there was something different about him, an X factor.

“He was talking about watching gorillas on the Nature Channel and observing their movements,” Fitzgerald tells the Irish Voice.

“He was just so different to the other fighters, he had so much self-belief and conviction. It just made us want to continue following his story. Then he literally got so famous almost overnight, getting into the Ultimate Fighting Championship (UFC) as his fame continued to grow.”

Lady Gaga says that she knew she was famous years before she actually made it and that statement could be true for McGregor too Fitzgerald says.

“He predicted these things. He was talking to us about beating Jose Aldo the featherweight champion long before he had even gotten to the UFC. It’s almost like he shouldn't have had the right to talk about beating Aldo before he beat the first guy. But he just has that crazy confidence.”

All the big claims McGregor makes and goals he sets himself, at the end of the day he follows through with most of them Fitzgerald says.

“I think it drives his training on. He really works incredibly hard in the gym, it's fascinating to watch and record,” says the director.

If raw star power made Fitzgerald decide to start following McGregor back in 2012, it was his swagger that clinched the deal.

“He's such a departure from your average Irish sports star. There's all the braggadocio for a start. It makes fans either support him or want to see him cut down to size,” he says.

The Irish are almost not allowed to be boastful but McGregor is different, Fitzgerald adds.

“He almost saw a gap in the market and said, ‘Why I can't I just love myself and throw myself out there?’ And he absolutely does love himself, it is the truth. Some people love him and some hate him but at the end of the day he is fascinating to watch fight. You're just so connected to him whether you want to see him win or lose. It's brilliant to watch.”

Conor McGregor: Notorious gives audiences an intimate look into the more human side of the superstar and, what a surprise, behind the scenes there's far less of the bravado that we're used to seeing from The Notorious.

“It's really him as a guy from Crumlin in Dublin who goes to Las Vegas where he fights in front of hundreds of thousands of people. It's a crazy story, you couldn't write it if it were a Hollywood movie,” Fitzgerald says.

One of the first things you'll notice about the film is how much screen time McGregor's long-term partner Dee Devlin takes up in the film and in his life.

“People talk about his coach and training partner having the most important role in McGregor's camp but we really felt, watching back over the footage, that Dee really has a central role,” Fitzgerald says.

“Without her, Conor wouldn't be in the right places at the right times (she manages that for him). So she's a huge part of his life. I think together they have a really strong bond and a great understanding of one another.”

For someone who seems to intuitively understand public spectacle and how to play to the camera, McGregor's has made some major missteps lately. He was roasted on Twitter and Facebook recently for his on-camera use of the word faggot. It did not go down well in the U.S. or Ireland, even among his fans. What's Fitzgerald's take?

“I think the more famous he gets the more of this backlash he's going to get. I can't really speak for Conor about what he says in a particular moment but honestly, knowing the guy I don't know him to be a hateful guy at all,” he offers.

“He says a lot about his opponents when he's about to fight them but he doesn't mean it. He doesn't wish bad for any of them. At the end of the day he has a huge respect for them because they get in there and they fight, so yeah, I just have never really seen that side of him but it's coming into play at the moment. He has to answer for it and I think he will and win the fans back, you know?”

After five years following his rise, what are the surprises Fitzgerald discovered about McGregor?

“One thing is that before he fights he's incredibly relaxed. I think that's amazing to watch. You'd think he'd be tense and whatever else, but Conor just seems to take it all on. What people should know about him is that he's actually fun, a cool guy with a lot of charm to him and not a lot of hate.”

When McGregor famously said “dance for me boy” to Floyd Mayweather in the build up to their boxing match in August, some people were appalled by what they called the Irishman’s bigotry. Surely McGregor was aware of the racial insensitivity of that phrase, they wondered?

Fitzgerald thinks the context in Ireland and the United States is not the same. “I think it's the fact that he's on the world's stage and how tense race relations have become in the United States. It wasn't the right time for that comment and he has to be extra careful,” the director added.

“But Conor didn't get to where he is by not saying things. He's always been the one to lash out and say the things. It's come back to bite him a little bit now but I think it's a lot to do with the timing and the tensions in America at the moment. It wouldn't have been as much of an issue maybe four years ago. But these events are watched worldwide by millions of people.”

When the reports came out and McGregor was accused of racism and homophobia he was really taken aback, Fitzgerald says.

“He was saying, ‘This is ridiculous, I'm not like that.’ Maybe he marginalized himself a little bit being from Crumlin. There's not a tinge of racism in Conor.”

There's a massive divide about McGregor in Ireland at the moment, Fitzgerald admits. People are either absolutely obsessed with him, following everything he does, or there's the naysayers.

“People who don't think mixed martial arts is a sport, or who don't like his suits, or how he speaks. Conor says it best himself, you're never truly famous till you walk out to a mixture of boos and cheers. I think he's just about there now. But they all want to watch him fight at the end of the day, don't they?”

Last week Conor McGregor: Notorious had its world premiere in Dublin with a question and answer session afterward that was lived streamed to cinemas in Ireland and the U.K. It's a measure of McGregor’s undiminished stature that he filled venues from Malin Head to Mizen.