Former FBI head James Comey is not a hero

James Comey gets to make millions, Donald Trump gets to be president while Americans get the wooden spoon. 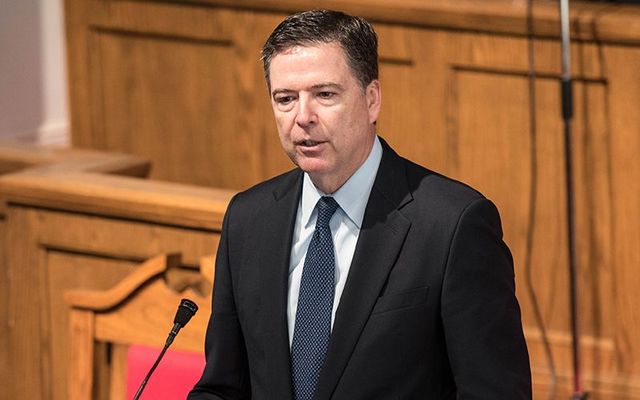 James Comey gets to make millions, Donald Trump gets to be president while Americans get the wooden spoon.

Irish American James Comey is a difficult man to figure out.  On the surface, he resembles the prototype of a cool, clean FBI guy, very tall, well groomed and coiffed, confident and personable in his manner.

Yet the history books will recall him not as some ersatz Joe Friday but as a man who failed his mission and became a mass of contradictions and muddled actions as the pressures of the job mounted.

Put simply, Comey was the wrong guy in the wrong place at the wrong time.  He was not decisive, he was not competent, he was not right and all the arguments in his new book wither in that context.

The eloquent and well-buffed facade crumbled as he blundered from one mistake to the next, professing it was all in the name of a higher morality.

A high moral tone seems to be Comey’s attempt at perfect pitch.  A little less morality and more humanity would have served him well.

He based a critical decision, the one to reopen the Hillary Clinton email case days before the election, on his supposition she would be elected president and he, Comey, might be caught short for not revealing that he had restarted the fruitless investigation of her emails.

He had no right making political suppositions.  His job as a prosecutor should have been just the facts ma’am, not a hunch he had that Clinton would win and he would be up to his oxters in trouble.

Attorney General Loretta Lynch had told him in no uncertain terms that interfering in an election process was just not done during the closing months of a campaign but Comey, thirsting for the limelight, went ahead anyway.

In the process, he deeply damaged the FBI which has to appear non-judgmental or political, yet Comey was both.

He tried to become Jesuitical, parsing the difference between calling Clinton careless while refusing to call her acts worthy of prosecution.  He revealed the Clinton investigation had restarted, but not that Donald Trump was also under investigation for Russian ties.

With the benefit of hindsight we see clearly which was the most dangerous of those two alleged misdeeds.

Nowadays, Comey suggests Trump might be a Russian agent, our very own Manchurian Candidate in the White House.  It ill behooves him to speculate on such things.

He presented no evidence, and he exhibits no knowledge other than speculation. Could it be true? Possibly, but Comey is not a credible source.

Of course, like all powerful men Comey exhibits very little remorse for his actions, nor does he take full responsibility for meddling in a presidential election which even J. Edgar Hoover never attempted so close to Election Day.

He has tarred and feathered his own reputation and in the process severely damaged the institution that he once led.

Trump fired Comey incredibly on the basis that he had been unfair to Clinton, which was about as fat a lie as has ever been uttered.

Now we have Trump and the former FBI director, like two sullen little boys, name-calling across the airwaves while a delighted media scrambles to cover the feud.

It is a sad day not just for the FBI but for the country that it has come to this.  Comey gets to make millions, Trump gets to be president while Americans get the wooden spoon, poorly served by both men who rarely encounter a conspiracy they do not like. It is a pitiful sight.

Read more: Ex-FBI Director James Comey: Blacks were treated much worse than famine-era Irish in US

Here's Comey's interview on the content of his recently released book: