"Ireland will forever be our real home, where all the emotions come flooding in and we can feel everything down to our roots. Because Ireland, our real home, is where the heart is." 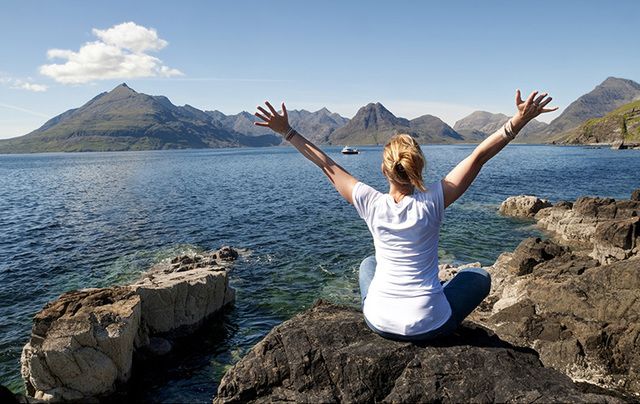 "Ireland will forever be our real home, where all the emotions come flooding in and we can feel everything down to our roots. Because Ireland, our real home, is where the heart is." iStock

The night before I flew back to New York after the Christmas holidays, the third plane I’ve taken to JFK in the last 12 months, I curled up in my mother’s arms and cried like a child. I had just spent two weeks at home in Ireland, and couldn’t fathom why I was taking it upon myself to leave -- again.

Over the course of two short weeks, I somehow managed to see school friends, college friends and family in roughly equal amounts during equally festive events. I felt the love, the joy, and the overwhelming happiness that comes with returning home. I should have felt revived and recharged by my time spent at home, but I was exhausted -- mentally, emotionally, physically.

But she very calmly said that no, she didn’t think I was crazy to leave. On the contrary, she thought that I would be crazy to stay.

And she wasn’t being insulting.  She was merely pointing out how much happier I am in New York. And she was right.

As soon as I boarded the plane back to the insanity of this city, I felt my anxiety start to dissipate. I hadn’t realized how stressful being home was until I no longer had to be there -- until I was safely seated with a blanket and an estimated time of arrival.

Now that I’ve already been back in New York for a couple of weeks, and the rest of my fellow ex-pat pals are returning too, I realize that I’m not alone in this feeling.

There is a certain pressure that comes with going home that I hadn’t noticed before, as the last few times I’ve gone home have either been during the summer or for much longer.

Cramming your entire social and familial worlds into two weeks over Christmas, knowing you won’t be home again for another year, is extremely stressful. More stressful than living in New York, which, now that I’ve gotten so used to it, isn’t remotely stressful at all. It’s just life, and anything slower than the pace here suddenly seems suffocatingly slow and unbearable.

This is, of course, not to say that I don’t love my family and friends, and that I didn’t have an amazing time at home. Naturally it was brilliant to see everyone, to catch up with people when possible, to see the baby of the family who wasn’t walking when I last saw her but is now running laps around the rest of us, to visit my grandmother again in her new home.

Needless to say there were countless moments of laughter, silliness and Dublin City chaos with friends, dinners and cocktails and festive nights spent belting out songs around the piano. It was all picture, postcard perfect -- like one of the new wave supermarket Christmas ads where everyone is rosy cheeked and delighted by the simple pleasure of each other’s company.

But then you have to leave, and the whole time there is spent with a constant awareness of your own impending departure, of all the things you’re going to miss over the next 12 months, of the upcoming year’s worth of laughter, silliness and togetherness that you have chosen to give up for something arguably great, but admittedly more isolated and separate from what, in these holiday moments, is ultimately home.

Suddenly, a night spent with college friends becomes a night where you have to be your best self, to prove to yourself more than to everyone else that you made the right call and that you’re happier abroad than you would be at home, and to do so without insulting anyone who hasn’t left home, or who can’t.

Suddenly, a night spent with family becomes shrouded with a sense of guilt for not having known how sick a relative was, or wondering if this is the last time you’ll see them alive.

Suddenly, not seeing an ex when you were positive you would run into them isn’t a bullet dodged, but a nightmarish realization that someone who used to be so important to you can now avoid you with ease, and you’re no longer a part of their life at all.

The crippling thing about coming home for a visit is that’s all it is -- a fleeting, temporary glimpse into what you left behind, and a reminder of how hard you have to work to make that choice worth it -- for yourself, and for the people who care about you.

On Christmas Day, when everyone was turning in for the night, my mom caught me weeping in the kitchen, and I could see the look of concern on her face.  Her presumption was that I was inherently unhappy, troubled, and that it was all coming out now that I was in the safety of home. I struggled to explain all of the above to her in fits and bursts that, at the time, made no sense even to me.

It was only when I was halfway across the Atlantic that I could put the pieces together and make sense of why I had been so emotional when I was home, whereas in New York I have to watch some heart-wrenching movie in order to force myself to cry if it’s been too long -- weeks, months.

But Ireland will forever be our real home, where all the emotions come flooding in and we can feel everything down to our roots. Because Ireland, our real home, is where the heart is.

Read more: Top reasons to make the move to Ireland