"The work that Druid offers is celebrated worldwide, but it’s time to acknowledge that it requires support." 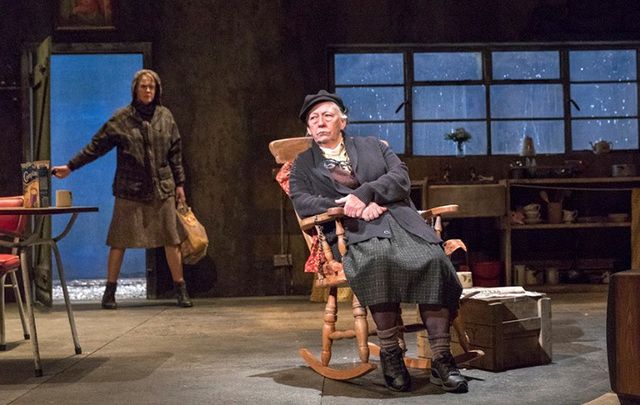 Aisling O'Sullivan and Marie Mullen in The Beauty Queen of Leenane at BAM.

Tony Award winning Irish director Garry Hynes and Galway’s Druid Theatre have been at the forefront of Irish theater over five decades. From January through March Druid are touring the U.S. before taking their latest sold out production of The Beauty Queen of Leenane even further afield to Hong Kong. Cahir O'Doherty hears from the award-winning director about Druid’s deep connections to Irish America, its new fundraising campaign here and what’s next for the preeminent international Irish company.

Culture, not Guinness, is Ireland’s biggest export. It’s our writers, filmmakers, music and theater that give us our outsize footprint on the world stage. It’s taken us much too long to recognize the fact.

But help is on the way.  By setting up the exciting Culture Ireland initiative, which is committed to aiding the Irish arts sector at home and abroad and promoting the results internationally, the Irish government has finally recognized the fact.

For Galway’s Druid Theatre, the country’s most critically lauded theatre company, the timing is perfect. Over the last 10 years Druid has performed in New York six times with six new productions. In that time, it has also presented ambitious tours throughout the U.S., presenting entire play cycles in several all-day critically lauded series with playwrights that range from Tom Murphy to William Shakespeare.

“We’ve developed very strong relationships with the Lincoln Center for the Performing Arts, not just in presenting the work but actually producing it and we want to continue to do that,” Druid’s Tony Award winning director Garry Hynes tells the Irish Voice. “But now we want to develop a Friends of Druid initiative in America to continue our work.”

Thanks to the success of shows like the just concluded Beauty Queen of Leenane at Brooklyn Academy of Music (BAM), American and Irish American audiences know the company well and revere its work.

“We don’t just think within the narrow confines of Ireland, we think internationally in terms of out planning,” Hynes explains. “And now in America we need help to be able to continue that planning. We need financial help from our supporters here.”

Hynes simply wants to expand the range of work that Druid does. The financial crisis in Ireland hit the Galway-based company hard.

“It did so much damage,” says Hynes. “We are now gradually beginning to recover. We have an annual grant from the Arts Council (in Dublin) and we do between two to three new productions each year and revivals of our productions.”

But to nurture new Irish talent Druid needs to grow too. “We need to do four to five productions a year rather than three to four. That’s not going to take a massive investment, but it’s going to take an investment,” she says.

“We believe if we could get that it would make a real difference to our ability to produce and on our impact with audiences and our ability to develop younger actors and writers.”

Irish American philanthropists should be at the forefront of that effort. To excite their interest you must reach them where they live, Hynes says.

So, Druid is pressing ahead. The company is poised to begin a very exciting five-year program that takes it through Galway City of Culture 2020 and on though 2021 and ‘22.

“There’s a 2020 project we’re developing with novelist Colm Toibin based on his novella The Testament of Mary. That will involve Connemara and the hinterlands and Inis Meain and the islands which we have a long association with,” Hynes says.

“We’re also developing an American Irish project which looks at the Irish story from both sides of the Atlantic, not just the Irish point of view but the American one.” (This is a revolutionary approach for the Irish theater, which tends to take a more insular approach).

In America, we are hearing a lot of talk about building walls now, but Hynes says her ambition is to build bridges. Focusing on Irish American playwrights like Eugene O’Neill, as Druid plans to soon, will open an exciting new conversation between the old country and the new world that was not possible in the era his plays were written, but that time has finally arrived.

“I’ve always been attracted to O’Neill because my theater identity is not the product of Ireland. It’s a product of New York and Ireland in the sense that I got the bug here when I worked in the city as a student over four summers,” Hynes says.

“I spent most of my time going into small basements downtown and in those places, I saw theater by people that looked like me. Ordinary people in small rooms, not big spaces, and I suddenly thought if this can happen here, why can’t it happen at home?”

America provided the inspiration and gave her the push to make the country’s most important theater company a reality. “That thinking was behind the formation of Druid in 1975 and I’ve always been committed to it,” Hynes says.

Looking at O’Neill and trying to trace the roots of the Irish American experience through theater texts has been very difficult, Hynes admits.

“Because the minute they leave Ireland these people seem to disappear. They metamorphose into Yanks who come back with big cars and big cameras, and in something like O’Neill they’re the old ghosts who haunt them.”

Generations of Irish writers found they couldn’t go back, and since they were cut off from something foundational they couldn’t go forward either.  O’Neill’s characters drink and drug but they can’t console themselves.

“I’ve come to the conclusion that we should write new stories,” Hynes explains. “So, that’s what we’re in the process of doing now, we’re pursuing the resources here in America, both artistic and financial, to commission a series of new plays from writers.

“The thing that’s important about it is that it’s not something we want to go home to Ireland and make it in Ireland and then present it to America and say, here’s a little gift. That’s not going to be our approach. We want to make it in both cities.”

The work that Druid offers is celebrated worldwide, but it’s time to acknowledge that it requires support.

“I’m going to be very personal here,” Hynes says. “I grew up and went to university in the late 1960s and early ‘70s. Because I have a historical instinct growing up I used to marvel at the fact that I was born eight years after the Second World War ended. And I grew up thinking that the liberal values and the education that I valued were safe forever. Everything was only going to get better incrementally.

“Which it has in terms of my life. And now, all of a sudden, at the last possible moment everything is up for grabs again.”

For Hynes art and theater are ballast against collapse, fracture, and fascism. Between Brexit and terrorism and Donald Trump, art can show us the way forward.

“I think we might have gotten lazy. We might have thought all right-thinking people are moving in step in the right direction. Then all of a sudden, we find ourselves where we are,” Hynes says.

“I think it’s hard not to think we’re going to have to be very responsible in the next four or five years.”

For theater makers and all those who support their mission, it’s time to support Druid as if our lives depended on it. Because in times of crisis and collapse, the theater’s near sacred mission to help us see ourselves clearly and find a path forward is at its most vital. With help from Irish American supporters, the celebrated company will prove its greatest works are all still ahead.