On This Day: Easter Rising rebels approve Proclamation of the Irish Republic draft in 1916 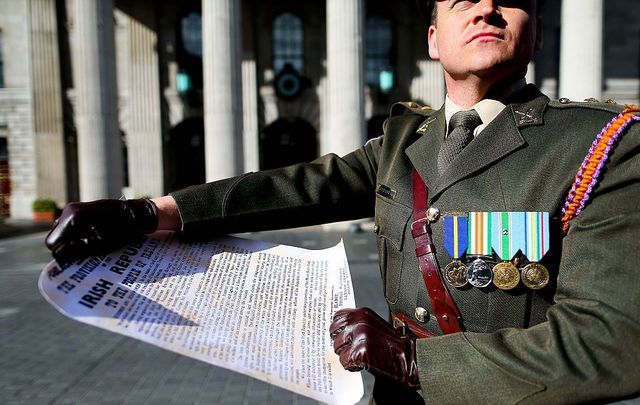 Captain Peter Kelleher from the 27th Infantry Battalion reads the Proclamation at the GPO on O'Connell Street on March 27, 2016, in Dublin, Ireland. Maxwells/Irish Government - Pool/Getty Images

On this day, April 17, 1916, the Proclamation of the Irish Republic, as declared as rebels took over buildings throughout Dublin at the start of the 1916 Easter Rising, was approved by the rebellion's military council. Below, we look to the book "Cherish, Cherish, Cherish: Reflections on the 1916 Proclamation" to learn more about this historic document.

It makes sense to ask Irish poets and writers to assess the enduring legacy of 1916, since so many of the leading participants in the Rising were writers themselves.  The event itself, as Yeats quickly understood, brimmed with symbolism and metaphor.

In "Cherish, Cherish, Cherish: Reflections on the 1916 Proclamation," three contemporary poets and a novelist write luminous personal appraisals of the Rising. First Hugo Hamilton delivers an extraordinary assessment, which begins with him leading a journalist from Berlin to the site on Moore Street where Padraig Pearse surrendered to the British forces with “a great symbolic gesture as though he was on stage and the world was watching.”

The executions turned the leaders of the rebellion into martyrs, Hamilton writes, and the brutal finality of this episode gave the Irish people reason to be both proud and aggrieved, it also led to the formation of an independent Irish state.

Standing on Moore Street explaining all this to the German journalist in 2016, Hamilton reflects on how much time has gone by since the leaders of the rebellion gave up their street fight. It can take us 100 years to understand what they did, he says.

Having had a straight-talking German mother himself, Hamilton says that she could never understand the devious Irish way of talking, of sidestepping, of avoiding the question. But you need to have a poetic sensibility to truly grapple with 1916, he says. The Irish don't do war very well but they do understand poetry and imagination.

The Rising was never going to be a military success.  Instead, it was an epic piece of street theater, a poetic success, a triumph of the imagination, which in many ways actually surpassed military success.

Read more: Atlas of the Irish Revolution among greatest Irish history books ever?

Hamilton misses nothing. Pearse was accompanied on the day of the surrender by Nurse Elizabeth O'Farrell, who was later carefully erased from the photographs and records. The Catholic state that emerged after the Civil War found female heroism too complicated, he reminds us, too toxic, too much competition for Our Lady and too difficult to control, so heroic Irish women were excised from the records and their contributions willfully overlooked.

Ireland is an old country, he writes, the landscape is full of memory. It's an ancient place that also somehow seems to feel like a young country just growing up, but have the people of Ireland achieved the goals on which the liberation of their country was founded he asks?

Revolutions never really end, in other words. Instead, they mark a line between what was and what is on the way.

Pearse walked and talked like the citizen of a country that did not yet exist but that he was willing into existence by force of imagination, and it's no wonder that act of imaginative daring has beguiled so many writers, poets and historians since.

Hamilton also astutely contemplates the creative mirroring that James Joyce was doing during the revolutionary period, busying himself creating a new space in art for a transformation of how the world approached his compatriots and their contributions. For Joyce, like Oscar Wilde before him, the goal was not only the liberation of the country but the personality as well.

Disavowing physical force in favor of ideas, Joyce undertook a parallel if separate enterprise which meant his rich contribution was misunderstood for generations after it had been offered, but Hamilton gives it space and consideration in his luminous meditation.

Poets Leanne O'Sullivan, Doireann Ní Ghríofa and Theo Dorgan also grapple with the living legacy of the Rising in verse and in polemic here, delving deeper into the psychic and political questions that it still presents us 100 and one years after it unfolded. This is a book to seek out and debate with, just as the original revolutionaries would wish you to. Cherish it.