Self-help guru who plans to love-bomb Donald Trump was bowled over by the 5,000-year-old ancient burial tombs as well as Ireland's rich culture and rapid change and growth. 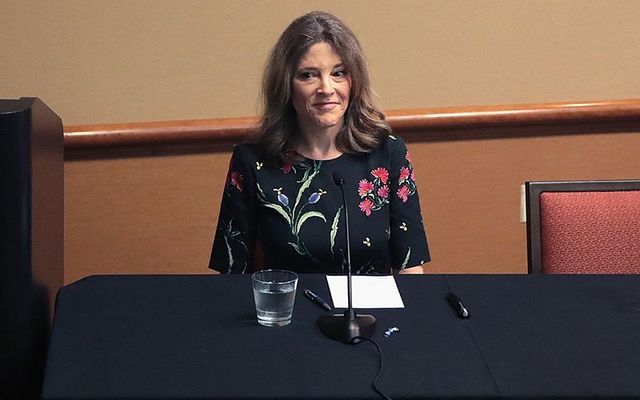 Marianne Williamson continues to be amazed by Ireland. Getty

Self-help guru who plans to love-bomb Donald Trump was bowled over by the 5,000-year-old ancient burial tombs as well as Ireland's rich culture and rapid change and growth

If the moderators of last Thursday’s Democratic presidential debate asked for a show of hands for how many of the 10 candidates ever traveled to Ireland, the out-there outsider Marianne Williamson would have been one of the few to raise hers.

The self-help guru who says she’ll love-bomb President Trump out of the White House has visited Ireland on a number occasions, most recently October of last year, to plug her best-selling books.  An Irish magazine called Positive Life interviewed Williamson in advance of her Dublin seminar last October, and she didn’t sound as kooky as she did during the debate.

What’s her favorite memory of Ireland? Not surprisingly, the monolithic tombs in Drogheda and the Boyne Valley.

“One trip I took that remains with me is when I went to Knowth and Dowth. Extraordinary. What amazes me about Ireland is that, unlike most civilizations, it was as amazing in ancient times as in contemporary times. That’s not all that common, you know,” she said.

“Newgrange and James Joyce? Seriously. Not many countries can claim that kind of thing.”

The tombs at Knowth.

Though some might think Marianne had a shot or five of some Irish whiskey before the debate, she was all business when it came to plugging her best-selling workbook A Course in Miracles to her Irish fans.

“The world has heard a lot about Ireland recently, and I’m curious about your own transition from an external emphasis on religious dogma to the internals of spiritual growth. Obviously, there have been some tragic lessons learned, and hopefully the principles of A Course in Miracles can help to shed some light on your path ahead,” she offered.

“People studying and teaching the Course in Ireland are doing tremendous work, and I just hope I can add to the conversation with whatever insight I’ve gleaned.”

One of her popular quotes that’s bouncing around the Internet?  “We may have bad weather in Ireland, but the sun shines in the hearts of the people and that keeps us all warm.”