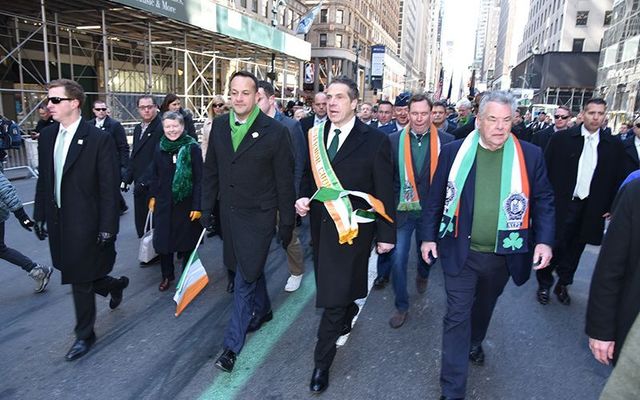 Update: On March 11, sources confirmed with the Irish Voice newspaper, sister publication to IrishCentral, that New York City's St. Patrick's Day is expected to be canceled by Governor Andrew Cuomo by the end of the day.

The below was published earlier on March 11:

The New York City St. Patrick’s Day parade has marched on Fifth Avenue for 258 straight years, through rain and snow, world wars and culture wars, and just about everything in between. But can it survive coronavirus?

As of Tuesday afternoon, the parade was still on, with New York City Mayor Bill de Blasio indicating on Monday that there were no plans to cancel, but on Tuesday morning New York Governor Andrew Cuomo had a different take.

When asked on CNN’s New Day morning show if the parade might be canceled Cuomo responded, “That’s one of the things we’re looking at.”  Last weekend Cuomo declared a state of emergency for New York, and as of Wednesday morning, there were more than 176 cases of coronavirus statewide.

All St. Patrick’s parades in Ireland have been canceled, and on Monday Boston Mayor Martin Walsh nixed Boston’s parade which was set for Sunday.

“Boston's St. Patrick's Day Parade, scheduled for 3/15/20, is being canceled. This decision is being made out of an abundance of caution to ensure that we are doing what is needed to keep the residents of Boston safe and healthy,” Walsh tweeted on Monday.

“While the risk in Boston remains low, this situation is changing very quickly and we are closely monitoring any local issues. Our top priority is preventing any new cases to the best of our ability,” he added in a statement.

Sean Lane, the board chairman of the New York parade, told the Irish Voice that as of Tuesday organizers had not been told by city or state officials the march would be canceled.  However, a number of marching groups traveling from outside New York have pulled out.

“That is to be expected.  We aren’t surprised by that,” Lane said, adding that it’s likely more groups would withdraw in the days leading up to the 17th.

On Monday de Blasio, who has marched in the parade since 2016 after the admission of the Lavender and Green Alliance, said that “we do not have a plan to cancel the parade at this point.

“Going to be day to day, hour to hour, it’s a lot of factors. Clearly we’re going to watch the progression, how quickly this disease progresses.

“But when you think about the transmissibility, one of the things that’s holding us back from wanting [to cancel the parade] is that it doesn’t really fit with what we’re understanding about transmission.”

Sources in the NYPD told the Irish Voice that cancellation of the parade has been “under discussion,” but that the force is waiting for further direction from officials.

In the increasingly unlikely event that the New York march will go ahead, organizers are expecting diminished crowds on the sidelines.  Lane is advising all parade-goers, particularly the elderly, to follow medical guidance.

An official statement from the parade on Tuesday said, “The NYC St. Patrick’s Day parade Inc has been held every year since 1762. We have received no notice from the authorities about postponement at this point. We recommend checking with your local health officials, government, and where appropriate, your personal physician for guidance. Please see link to CDC and NY State Government below and take special note for those most at risk.”

The Philadelphia St. Patrick’s Day parade scheduled for Sunday is also still on according to organizers, even though rumors persisted that it would be called off.  Chicago’s parade on Saturday is also going ahead.

A statement on the Philadelphia parade’s Facebook page said, “There is a notice of cancellation of the St. Patrick’s Day Parade due to concerns about the coronavirus being circulated on social media. The notice of cancellation is false. We are working with city officials to find out who is the source of the false statement and seeing what the legal ramifications may be as a result. The St. Patrick’s Day Observance Association and the City of Philadelphia have no intention to cancel the parade and it will go on as scheduled. We look forward to celebrating the 250th Annual Philadelphia St. Patrick’s Day Parade with everyone this Sunday, March 15, 2020.”