Master storyteller's imagines his death after hunger strike in Mountjoy having attacked Donald Trump, im-peaching him. 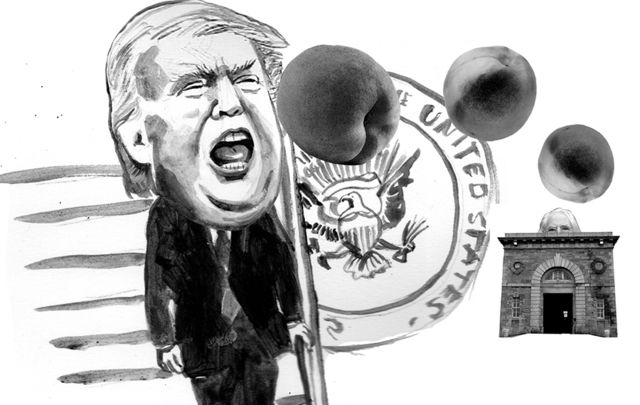 Ye may not be aware that all good quality newspapers possess a genuine morgue zone in their archives. This morgue is filled with prepared obituaries which will be ready to go to print within minutes of the subject passing away.  It makes good publishing sense.

Because I have been writing for the Irish Voice since the beginning, 30 years ago now, I have had an obituary in that morgue for over 20 years.  It is now out of date and, for that reason, our esteemed editor Debbie McGoldrick asked me to refresh and update it last week. I instantly complied.

Incredibly, perhaps because my dear mother Mary was a significant fortune-teller in her time, and I've inherited some of that gift, there was a remarkable prescient kind of element in the product over which I had very little control. I forwarded it into the morgue in New York anyway and subsequently thought that many of you might like to view my obituary in advance. So here it is in full:

The death has occurred in Mountjoy Jail in Dublin last weekend on the 35th day of his hunger strike of the journalist Cormac MacConnell, who created an international furor last St. Patrick's Day at Shannon Airport by hurling three ripe peaches at the arriving President Donald Trump whilst shouting, "This is my way of impeaching the most dangerous man in the world since his own people are too afraid of him to do so.”  The incident triggered a major international incident in the days which followed.

MacConnell, a frail pensioner with a previously unblemished record, appeared at a special court in Shannon the following morning, having been arrested at the scene by police assisted by a welcoming party of employees of the luxury Trump golf resort in West Clare which the president was visiting for the national day.  He refused to recognize the court, shouted that he would repeat the attack if given the chance, would not pay any fine the court would impose and was beginning a hunger strike immediately in continuing protest against President Trump being welcomed to Ireland. He had two black eyes and facial marks and alleged his nose had been broken, not by the police, but by those he called "dombeggars bowing the knee to their boss.”  He was sentenced to six months detention in Mountjoy.

The attack on the U.S. president, who was visibly shocked when struck about the head by all three of the ripe peaches flung at him, was instantly condemned by all the Irish political leaders at every level, especially after President Trump tweeted two hours later from his golf resort in Doonbeg: “This was a foul attack upon me by a gutter hack of the fake press brigade. In response I am likely to turn the Emerald Isle red with the fire and fury of a response such as the world has never seen before!"

Such was the fearful atmosphere in Ireland created by the incident that MacConnell had to be kept in solitary confinement in Mountjoy once he arrived there.  Prisoners in the population, including killers and other serious criminals, threatened to kill him on sight because his actions were likely to lead to them having no homes to go back to after finishing their sentences.

After the 25th day of his hunger and thirst strike he was forcibly fed in his cell daily and, according to his family, remained totally defiant although declining very quickly physically.

One of his sons smuggled a cell phone to him in his fourth week in jail, and he used this to tweet many messages of defiance to his few remaining friends.

One tweet stated: "I would impeach him again tomorrow if I got the chance. I do not regret my action at all. Somebody had to do something.”

Another dealt with the prison guards who were forcibly feeding him in his cell: "One is from Mayo and the other from Cavan.  They hail from counties where you would not get a free glass of water if you were dying of thirst and that's a fact.”

Reportedly he expired whilst being forcibly fed on the 35th day of his hunger strike. His final tweet to his family, released by them after his funeral in Killaloe, stated: "I will be gone away soon.  I hope somebody else takes up the fight now.  Goodbye and God bless you all...except your man!"

MacConnell's funeral in Killaloe was attended by only immediate family and a few close friends.  There were no politicians present.

The funeral was held in the late afternoon when the chapel was almost deserted except for the mourners. Atop his coffin was placed the Apple upon which he had written his stories for many years and, remarkably, a punnet of ripe peaches. A reliable source said these had been delivered with a message none of them could read from the North Korean Embassy in London.

MacConnell's casket was conveyed in the dead of night by his family to the new Shannon Crematorium, only a short distance away from the Shannon Airport where the March "impeachment" occurred.

His ashes were delivered to his family afterwards and it is understood that, since then, his sons, again in the dead of night, followed his wishes that they be scattered along the coastal site in Doonbeg where Trump proposes to erect a great wall to protect his luxury resort. It is understood MacConnell hoped this action would result in toxic consequences for the wall if it is eventually erected at all.

He is survived by his wife Annet, daughter Ciara, sons Cuan, Scobie, and Dara, seven grandchildren, two dogs named Anika and Pepper, a cat called Belle and a tame robin called Dander who also, the family reported, seems to have gone on hunger strike since the death.

There is the new obituary en toto. I hope sincerely that it will be a good while yet before any of ye are reading it again!