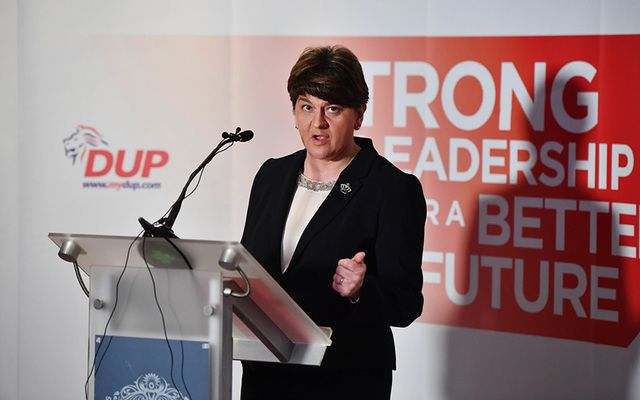 Arlene Foster of the DUP. RollingNews

In Britain the Conservative government, to prolong its own life, has just shown itself willing to shred the Irish peace process, the Good Friday Agreement and the many years of political hard graft it took to deliver an agreed settlement in the North.

The Democratic Unionist Party (DUP) has revealed it is also quite willing to press the red button, forsaking the future for a transitory “supply and demand” advantage in the present. People in the U.K. gripe and grouse about their anachronistic bigotry, their stone age homophobia and their close proximity to Protestant paramilitary leaders, but there has been less thought given to what we are really seeing here – a heist.

Conservatives desperately need the 10 seats provided by the DUP to prop up Theresa May’s minority government. To get them they will have to commit to the DUP’s shopping list of higher public spending and lucrative tax breaks. They also want to end airport tax on visitors to Northern Ireland (as is already the case in the Republic) which generated about £90 million between 2015 and 2016.

If enacted, every other airport in the U.K. will want in on the deal, creating more problems. The DUP have the Conservatives over a barrel in other words. That’s why the talks aimed at finalizing a deal have proved predictably torturous.

On Monday new Taoiseach Leo Varadkar met with May in Downing Street to express his concern over the perception that the U.K. government will offer special treatment to the DUP at the cost of Sinn Fein, thus imperiling peace. “We spoke about the very important need for both governments to be impartial actors when it comes to Northern Ireland and that we are co-guarantors of the Good Friday Agreement,” he told the press.

After the meeting, the details of which were not revealed, Varadkar added, “I am very reassured by what the prime minister said to me today that that won’t be the case.” What reassurances he received he didn’t share.

Meanwhile Sinn Fein, in a tersely worded statement, said the DUP was living in a “fool’s paradise” if it wants to re-establish the institutions in the North “without adherence to equality and rights.”

It’s been a rollercoaster year for the DUP leader Arlene Foster, who began it seeing her leadership imperiled by the so-called Cash for Ash public spending scandal and then by the questions raised over an eye-popping $425,000 donation to her party from an unnamed, but rumored to be Saudi, source.

What’s fascinating is that the DUP came within 1,200 votes from being completely pushed aside as Northern Ireland’s largest political party in the devolved Assembly, and this was almost accomplished by the historic new mandate given to its archrivals Sinn Fein.

“The notion of a permanent unionist majority in the north has been demolished,” Gerry Adams, Sinn Fein’s president, told the press. It would behoove Foster all to reflect on the implications.

Instead, given the sheer enormity of the challenges before the DUP, not the least of which include promoting Brexit to a society that voted overwhelmingly to reject it, it is a cause for some wonder just how much she’s acting as though she had an unassailable mandate that can never change, when the numbers say otherwise.

It certainly wasn’t Foster’s adroit political acumen that saved her as much as it was Conservative hubris and overreach in the last election cycle. Recall that Foster opposed the Good Friday Agreement that brought peace to the North, ditching the Ulster Unionist Party for the DUP in an act of cynical grandstanding that made her career. So as she shuttles back and forth to Downing Street with an un-fillable bag of demands, what Foster is not doing – what May and Varadkar are also not doing – is explaining to the public where this road show is really headed.

Because the contradictions are frankly unsupportable. The DUP supports Brexit and they also want free trade deals with the rest of the world. They want to leave the EU but they also want a comprehensive free trade and customs agreement with the EU. That can’t happen.

Additionally they want they want to maintain a “frictionless” border with the Republic, but they are busy tearing up the agreements on which they are based. It’s delusional. As each day goes by it becomes clearer that the holdup in the negotiations with Downing Street stem from the near impossibility of delivering on their demands. Retaining U.K. membership of the Customs Union while leaving the Single Market is a paradox they haven’t reconciled because they cannot.

The North needs leadership, not magical thinking. Neither Foster, May or Varadkar have explained how they will square these circles because the reality is they can’t. While they’re busy playing kingmaker the DUP are busy losing the run of themselves. If you haven’t heard much from Sinn Fein in recent weeks that’s likely why.