Brace yourselves, US tourists, the Irish want to talk Donald Trump

Tourists coming from America should prepare themselves to be asked which way they voted - Trump or Hillary Clinton? We have an insatiable appetite. 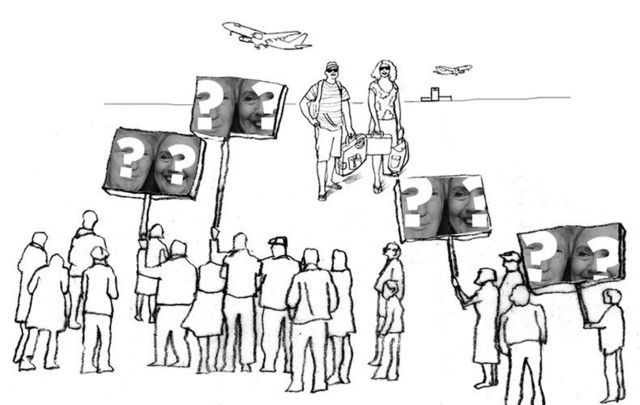 Hey!? Who did you vote for? Donald Trump? Hillary Clinton? Caty Bartholomew

Old Johnny MacNamara possesses the most original and colorful turn of speech I've heard for years.  Late the other night we were all watching the TV news in the pub, and the exchange between your esteemed president and Secretary of State Rex Tillerson, and Johnny said, and I quote him verbatim, "We were nearly destroyed altogether in this country by the Black and Tans but dammit, lads, the White and Gingers are far more dangerous altogether. They'll do for us before Christmas for sure!"

I am sure ye all know who he was talking about.

I mention this verbal gem because it is likely to be of special interest to any of you coming over to Ireland for the first time this fall.  The tourist numbers are up in the west as October heads us towards the winter and the statistics reveal that many of our visitors are from the U.S. and on their first trip. This is advice to prepare them for the almost insatiable interest in the cuts and thrusts of American politics being evidenced on all sides.

It is fair to say that there is a tincture of real concern about the future over here as well as the war of words that daily intensifies between the one called the Rocket Man and the one labeled the White and Ginger by Johnny Mac.

The American visitor is quite likely to be asked today if he or she voted for Trump or Clinton in the recent election. I've asked the question of visitors several times recently and, frankly, been surprised by the answers freely given by most.

Well? Which way did you go? Trump or Clinton?

There is an enduring perception over here, you see, that about all Irish and Irish Americans have heavily favored the Democrats down the decades and voted accordingly. There seems to have been a sea change for sure.

Most of those who responded to me, those with ancestors from the west I would have fancied to be Democrats, replied that they had voted for Donald Trump because of dissatisfaction with the ruling elite in Washington. A significant segment of the group, in addition, volunteered the information that their vote was an anti-Clinton gesture rather than wholehearted support for Donald Trump.

A few said, also, that they now regretted exercising their franchise the way they did on the day.  Electorates everywhere are complex organisms, are they not.

As many of you who were born here are aware, The Late Late Show on state broadcaster RTE is one of the longest-running chat shows on TV anywhere in the world. It's current presenter Ryan Tubridy took himself over to New York a month ago for a lengthy and quite interesting interview with Hillary Clinton about the launch of her book.

The lady was more impressive in the interview than during her campaign, was warm and wry and accepting of the mistakes she made during the campaign. She said what hurt her most was losing to an opponent who was not, she said, a real Republican at all.

And she paid all the proper compliments and praise to Ireland and the Irish. I think if she were to run for president of Ireland in the next round she might fare very well indeed after that interview. Sure we all love a few pats on the national back don't we.

Getting back to Johnny Mac's concerns, though, there is a thread of real concern running across the country recently about the ongoing escalation of the situation re: North Korea and the torrents of tweets with cryptic angles to them from the alleged White and Ginger.

I have never before experienced that level of concern, even when the Troubles were raging in the North and horrors were happening about every night of the week. Probably it is the nuclear element contained within the equation, but at any rate it is a reality.

The next-door battle for independence in the Catalonia region of Spain, for example, is frequently topped on the news bulletins by the most immediately breaking American political stories of the day. And for sure there are lots of them, almost every hour on the hour.

Anyway, I'm telling first-time visitors to these shores to be aware of the keen interest in your political scenarios over here nowadays and to be prepared to expect questions about which candidate they supported in the last bout.  Many of the queries, also, will come from men and women who have been tied, often by family tradition, to the major parties like Fine Gael and Fianna Fail.

Even today, again by tradition, most of them would find it extremely difficult to switch sides whatever the merits or demerits of their party candidates. At general election time, accordingly, the canvassers for all parties can accurately say, "That's a Fianna Fail house" or, "They've always voted Fine Gael under that roof" with an astonishing level of accuracy.

Even the younger generations, in my experience, are slow make the changeover. And a significant percentage of them, disillusioned maybe with all politicians, often don't bother to vote at all.

The bottom line for the visitor is that folk here are genuinely interested in talking politics with strangers. And if we here gain more experience about the free mindsets of those who vote with their heads rather than with their hearts, and for policies and principles rather than just parties, then that is both stimulating and beneficial down the road.  Even though old Johnny Mac claims that road is likely to be short indeed!