After “Black 47,” we need the tale of famine survivors who came to the US

Irish in America are in need of a reminder of just how despised, just how desperate, just how foreign, their ancestors were. And all of that begins with the Famine Irish, streaming off of those coffins ships. 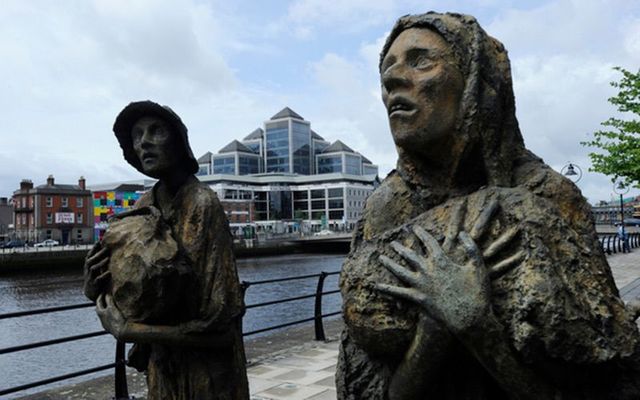 Irish in America are in need of a reminder of just how despised, just how desperate, just how foreign, their ancestors were. And all of that begins with the Famine Irish, streaming off of those coffins ships.

The critical reaction to the new Irish Famine movie "Black ’47" has been decidedly mixed.

Noting that this “is a rare feature film to treat the Irish Famine,” the Times does acknowledge that the movie “tilts…heavily toward a genre exercise.”

However, other critics, including the British press (and it is worth pointing that out, isn’t it?) have not been so kind.

“Thin and draggy” and filled with “stereotypical baddies,” claimed The Guardian.

“Overbaked” and “uber-glum,” The Telegraph declared.

None of this really matters.  For the Times to point out that a mainstream film about the Irish Famine is “rare” is a little like saying Irish history has a few dark moments.

The Famine is essentially absent from film history.  Which also means we never talk about the many, many ways it altered the course of world history, including ways which we are still living with today.

Rea summed the absurdity of all this up in a recent interview.

“They did try to do (an Irish Famine movie) in the ‘90s.  I was invited to participate and someone in America said, ‘It’s very heavy.  Couldn’t they lighten it?’ My agent at the time said, ‘How are you going to lighten it?  Feed them?’”

It goes without saying that, yes, of course, this is dark subject matter and, no, this not going to sell a whole lot of Raisinets and popcorn.

Black 47 is heading into its 5th weekend in Ireland and is still playing in 80+ cinemas. We appreciate all the support the film has been receiving across the country! Check out where it's still playing near you on https://t.co/gAVOUlJxeY #Black47 #Black47Film pic.twitter.com/d14msjVVIO

And yet, somehow, laugh-fest movies like "Schindler’s List" and "Twelve Years a Slave" have not only been made but made lots of money and won tons of awards.

To make this even more fun, there are quite a few folks out there who will give you a wink and a nudge and say, “Well, what do you expect?  Those people always get whatever they want, but us Irish folks, no one gives a crap about.  Vote Trump!”

Whatever reason it took so long, it can only be hoped that "Black ’47" is the first of many movies that not only remind us of the terrible toll the Famine exacted on Ireland but how it also changed American history.

There has never been a time when we so desperately needed to be reminded about how the Irish changed America.

Imagine all of the things anti-immigrant activists are bothered by today.  The newcomers who are poor.  Who are not interested in bending their customs to American ways.  Who commit crimes for a variety or reasons.  Who are devoted to a religion that is so deeply foreign.

If it enrages you that that is happening now, it happened tenfold during the era of "Black ’47,"  when so many desperate Irish washed up upon American shores.

Once you realize that this massive wave of desperate Irish immigrants changed the course of American history—as in America was forced to change, because there was no other way to absorb all of these people—you can step back and say every subsequent wave of troubling change was actually not so bad.

Not only did the Famine Irish upset native-born Americans with their frightening religion and awful poverty, they packed into American cities in a way that created a divide we are still living with today.

When all is said and done, for all of the talk about race and ethnicity and language and culture, America is mainly divided today by geography: urban ethnics vs. rural natives.  It was the Famine Irish that set that all in motion.

Descendants of the Famine Irish may want to look at today’s urban migrants with disdain.  But all that means is that you are doing exactly what uptight WASPs were doing when they looked upon all of those Irish Catholics flooding into New York, Chicago, Boston and Philly and believed they were looking upon the beginning of the end of America.

Isn’t that what’s happening now?  What else can you believe?  That somehow the desperate, starving Irish were better, stronger, than today’s migrants?  Does that make any sense at all?

So many Irish in America are in need of a reminder of just how despised, just how desperate, just how foreign, their ancestors were.  And all of that begins with the Famine Irish, streaming off of those coffins ships. A movie capturing that might be the first step toward understanding.

And the one last thing those descendants should remind themselves?  At least their ancestors survived the journey across the Atlantic and got a chance for a better life in the U.S.  That’s all most immigrants still want.

Would you like to see a movie about this? Let us know in the comments section, below.