"Black 47" was released in Ireland on September 5 and the movie, the first ever set during the Irish famine, has received glowing reviews. 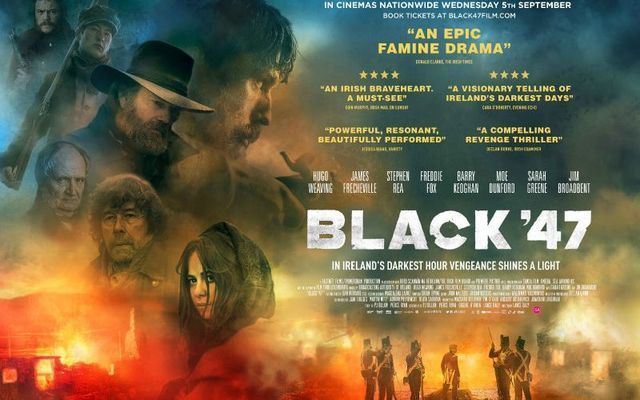 A promotional poster for Black 47, an action thriller based during the Great Hunger. FASTNET FILMS

Black 47 was released in Ireland on September 5 and the movie, the first ever set during the Irish famine, has received glowing reviews.

Written by PJ Dillon and Pierce Ryan,  with collaboration from director Lance Daly and  Eugene O'Brien,  the film stars James Frecheville as Martin Feeney, a former British soldier who returns home to Ireland to discover his family members either starved or destroyed by the English. The story follows Feeney as he sets on a path of revenge.

READ MORE:  "Black 47” movie is a must-see for Irish Americans who value their history and heritage

The Irish Independent gave the film four stars, saying: “Wisely, I would say, Lance Daly's Black 47 does not tackle the full horror of the Great Hunger head on, and instead uses it as a haunting backdrop for a moving and very entertaining genre picture - a revenge thriller, its director reckons, though to me it felt as much like a western, the kind of Irish film John Ford might have made if he'd been inclined to move beyond the wistful paddywhackery of The Quiet Man.”

RTÉ, which said Black 47  “deserves its spot among the memorable films of 2018," also gave the film four stars.  “The saying goes that revenge is a dish best served cold. Or in this case, damp. It's in your bones right from the start of director Lance Daly's Black 47 - an Irish Western in all but name.”

Variety wrote: “…this may well be the first encounter international audiences will have had with the Great Hunger, and for them Daly delivers a resonant, beautifully performed Irish Western that benefits from the exotic sound of Irish Gaelic spoken as a living language, and the brackish majesty of cinematographer Declan Quinn’s wide vistas.”

Daly, the film’s director, told The Irish Times: “The joke has been made. It’s not a spaghetti western; it’s a potato western. There’s some similarity. There are hats and horses in our film and the period it’s set in is 25 years before the classic western period. But I don’t know how much of a western it is, because so much of the western is about power and the frontier and American cultural icons. The western revises the history of the west and the killing of the natives, so this is almost an anti-western in that it is told from the side of the Apaches.”

To get the look of the film, Daly said they did “loads of homework.”

“We spoke to a lot of historians. We looked at all the available paintings and all the drawings. There isn’t a lot. But we looked at the archive at Quinnipiac museum. They have the biggest visual archive so that was a constant resource. There are little things in the film where I wasn’t quite able to get to where I wanted in terms of historical accuracy. We can’t know for sure what the accent sounded like or what color something was. But it’s as true to the time as much as it can be.”

Niamh O’Sullivan, the curator of the Dublin exhibition ‘Coming Home: Art and the Great Hunger,’ the largest collection of art relating to the Famine, was one of the historical consultants of Black 47.

“I was contacted fairly early on in the process,” said O’Sullivan. “Because I’ve done a lot of research into the visuality, if you like, of the Famine. Lance and his team were obviously very interested in the visuals: how the landscape looked, how people were dressed.

"When you see the early sequences of the film, they have that sepia look that you got with the Illustrated London News because of course there are no known photographs of the Famine. Photography was just in its infancy. And art had great difficulty pictorializing an epic catastrophe such as the Famine. So it was really through the illustrations in the Pictorial Times and the Illustrated London News that people around the world actually learned about the Famine. Those publications had a huge circulation. The Illustrated Times had sales of more than 100,000 at the time.”

“I wouldn’t be so bold as to say that it is the definitive look of the Famine because I am quite sure that other people at other times will come up with other takes on it that will be as interesting and as challenging,” she says. “But I think it’s a fantastic rendition. That first 10 or 15 minutes is probably as much detail as people could take. If you had kept that up for 100 minutes people would have been deadened by it. The fact that the narrative goes into a different register makes the early part work.”

READ MORE: Irish Famine movie “Black 47” has a poor Rotten Tomatoes ranking - should we be worried?

Daly said: “I don’t think it’s possible to dramatize with sincerity or honesty the suffering that happened at that time. I think that there’s something weirdly perverse about trying to do so and I certainly don’t think you can do it as entertainment. We did find it hard…there was never an intention to stage something that would capture was what is it like to see your children starve. This is a revenge story. It’s about the politics of the time. It’s about the relationships of the time…”

Black 47 will be released in the United States on September 28.