"The hard truth is that wars, especially civil wars, as we later painfully learned on this island, are awful bloodlettings." 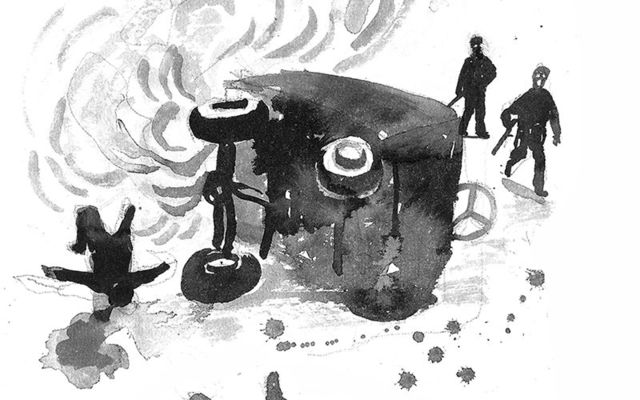 An illustration of that bloody ambush at Soloheadbeg. Caty Bartholomew

"The hard truth is that wars, especially civil wars, as we later painfully learned on this island, are awful bloodlettings."

The first ambush that eventually and bloodily led to our nearly total freedom from English rule occurred in Co. Tipperary on the day that our native government met for the first time in the Mansion House in Dublin.

I was not too interested in watching the re-enactment of the parliamentary proceedings on RTE, to tell the truth, but my recall of the Solohead ambush was powerfully jarred a few days later by a message received from a grandson of Tim (Tadhg) Crowe, an IRA survivor of a historic happening in our colorful past.

The grandson of Tim Crowe, whom I will not name here, referred back to an article I’d written many years ago now about his formidable grandfather. The article referred to a meeting I had in Soloheadbeg away back in the seventies of the last century when writing for the Irish Press, and the reference to it recalled sharply to mind the impact Tim Crowe made upon me during that interview in Soloheadbeg.

Like many of you with Irish roots, I’d avidly read Dan Breen’s Fight for Irish Freedom book as a schoolboy, and Breen went on to become celebrated as a major warrior and hero during the bleeding years that have shaped both our past and our present realities.

Many of you, however, will not have heard too much about little Tim Crowe, long since dwelling in the Valhalla reserved for patriots and heroes.  I will never forget him.

I remember clearly thinking that the aged little man I was interviewing that Tipperary day was extremely formidable and alert despite the fact I thought, from his pallor especially, that he was on the last lap of his Tipperary life road.

Most clearly, however, he revealed to me just how brutal and bloody that first ambush had been. The IRA party, led by Breen, you see, lay in wait for two Royal Irish Constabulary policemen escorting a cart of gelignite explosive along the narrow road.

Ye can get the full details of the historic yarn through easy research, but Tim told a story that displayed the whole brutality of what happened on that quiet Tipperary road after the escorting policemen were challenged to put up their hands and surrender their cargo. Instead, said Tim, they reached for their rifles and the ambush began.

According to Tim, the most lethal weapon the IRA ambush party possessed was Breen’s revolver. The others had only shotguns.

But Breen’s revolver jammed after just one or two discharges, and it took time like what seemed an eternity before it was ready for action again.  By then, from the other IRA weapons, the two policemen had already been felled on the road.

I won’t go into any more grisly details of what followed. Ye can easily research those yourselves if you wish, but suffice it to say that if you are of a queasy disposition probably it is best to leave it there.

The two constables were very dead indeed by the time the ambush party had retrieved their ammunition belts, rifles, and the precious gelignite cargo that had been their prime target.

We have a global tendency nowadays, beyond all reasonable doubt in my opinion, to sanitize the reports emerging from the many wars exploding about everywhere across the face of the earth. There is talk of “clean strikes” against precise targets and that sort of thing.

That is not the way things were on that Tipperary day in Soloheadbeg.  The hard truth is that wars, especially civil wars, as we later painfully learned on this island, are awful bloodlettings, especially when oppressed civilians, without weapons of war in their keeping, are forced into guerilla tactics such as ambushes, car bombs, and suchlike.

Car bombs, God help us all, have already exploded in Derry as this Brexit fiasco threatens the peace agreement in the North at time of writing, and the so-called Ides of March loom ever closer.