The greatest city in the world but the reality that Cuomo and de Blasio need to face is that New York is becoming impossible to live in for its people. 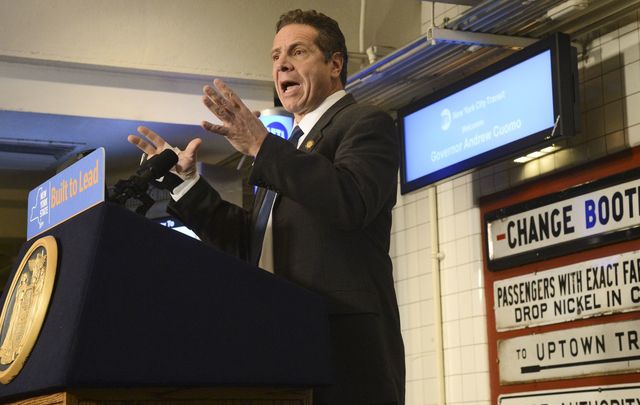 The greatest city in the world but the reality that Cuomo and de Blasio need to face is that New York is becoming impossible to live in for its people.

Here's a thought for New York Governor Andrew Cuomo, New York City Mayor Bill de Blasio and all the other pols who were drooling at the thought of luring Amazon to Long Island City with a $3 billion tax “incentive” – how about giving the same care and consideration to New Yorkers who pay the highest taxes in the nation! Where’s our tax break?  Who in Albany is truly outraged that New York taxes are out of control and fed-up residents are fleeing in their droves?

“New York's population continues to decline faster than any other state, according to new data released by the U.S. Census Bureau,” a story in the Democrat & Chronicle said.

How come, Governor Amazon Cuomo—his preferred nickname— isn’t as furious about those sobering numbers as he is about Amazon saying fuhgeddaboudit?  New Yorkers are sick and tired of being taxed to death, and hearing the “great” news that Amazon was being welcomed with a billion-dollar tax gift added salt to the wound carried by many in metro New York who work hard and play by the rules.

Oh, but Amazon was going to generate $27 billion in new tax revenue, you say, and create a ton of high-paying jobs! They’re still free to do that—they’re the ones that reneged on the deal after all.  But it was their way or the highway—and their way was to have us pitch in and help pay for their expansion.  We should all be so lucky!

Why should New Yorkers be fine with Amazon, the richest company in the world, getting a hefty discount when tax time rolls around?  Why does a company like that need subsidies other than for shareholder satisfaction and further enrichment?

Where’s our discount? Who in our state government is bending over backward to take care of us?

No one. Absolutely no one.

In fact, we’ll soon be asked to pay more in the way of MTA fare hikes so we can continue to subsidize the basket case of a transit system that gives us overcrowded, outdated subways, trains that don’t arrive on time or sometimes don’t show up at all.

Our infrastructure is a joke.  Rocky road is not only a flavor of ice cream; it’s also an obstacle course that New Yorkers have to deal with when driving because loads of our roads are in disrepair.

Many of us will be further looted this year due to the new President Trump-supported federal tax law that allows for only a $10,000 deduction for state and local taxes.  Ten grand in metro New York is but a drop in the local tax bucket that demands our hard-earned money – it’s not at all unusual for an annual school/property tax bill to be $20K or way more.  That’s just crazy.

It’s total tax dysfunction in New York and a few other states like California and New Jersey. But how come the contagion hasn’t spread to places like Tennessee, the Carolinas and the majority of other states?  What are they doing that we aren’t, and why can’t we have a similar tax structure too?

Oh, but we’re New York, the “greatest city in the world,” the “city that never sleeps.” Well, maybe we need a nap so we can get energized about treating hardworking New Yorkers with the same reverence as our leaders used in their dealings with Amazon.

More and more people are saying thanks but no thanks to New York.  They’re building lives for themselves in places like Austin, Texas, and Orlando, Florida, where the taxes are reasonable and the living is easier.

Governor Amazon was whining last week that New York’s income tax receipts were down a whopping $2.3 billion in December and January alone – and blaming Trump’s new tax law for the hemorrhage that will only get way worse.  People of all income brackets are scrambling to get out of Dodge, but it’s not Trump’s fault.  It’s New York’s.

It’s time Cuomo looked in the mirror and asked himself what he can do so that New Yorkers can remain New Yorkers.  Getting our tax house in order along the lines of most other states would be a far more impactful legacy than ushering Amazon into an already chock-a-block Long Island City, or securing a local helicopter pad for Amazon CEO Jeff Bezos.

As Frank Sinatra memorably sang, “It’s up to you New York…New York.”

Read more: Irish lawyer reveals the heartbreak he saw on the US /Mexico border