Almost a fairytale of New York at Gaelic Park

“Wait till next year,” of course was the New York cry, as it always is for loveable losers. 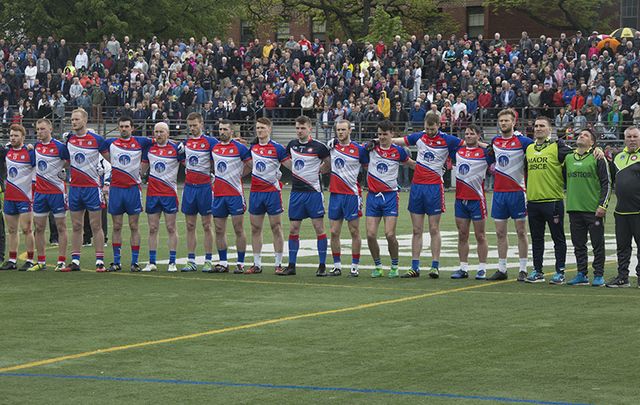 It looked for a brief shining moment on Sunday in Gaelic Park that the New York all-stars were about to pull off an historic upset in the first game of the 2017 All-Ireland football championship.

Seventeen minutes into the second half they took the lead against Sligo and looked in control of the game at that point. The mounting buzz in the crowd signaled a sense that we could all be watching history.

New York, the mighty metropolis of the western world, is merely a minor player in Gaelic football.  In 18 years competing as part of the Connacht championship in Ireland, their record is 0-18.

But hope springs eternal, and the 4,000 or so local fans who made it to the bastion of Irish culture and sport called Gaelic Park on 240th Street and Broadway in the Bronx on Sunday had reason to hope.

Last year New York had come within a kick of the ball to defeating Roscommon, one of the better teams in Ireland at the time. A year later Sligo were not as highly rated and seemingly there for the taking.

The New York team is suddenly a transformed entity. A few years back with emigration dying out the teams were no match for the Connacht side.

Now, however, the extended J-1 work visa which allows graduates to stay a year has meant an influx of new talent.

The downside, of course, is that the players have to return to Ireland after a year, which means that New York's team on Sunday featured only four starters out of the 15 from 2016. A new generation of J-1 players had replaced them, as they will be replaced next year.

Read more: How an American guy came to love hurling just as much as any Irish lad

The old venue, home for Gaelic games in New York since 1926, was spruced up like an old lady expecting the once a year family visit for the occasion.  Despite the cleaner look, the old park is very far behind the standards set in Ireland even for smaller football grounds.

The GAA for too long was under the thumb of the John Kerry O’Donnell family which ran the park like a fiefdom but left a vast leadership gap after John Kerry passed on.

I had one of the very few interviews with John Kerry before he passed. He met me in his Gaelic Park redoubt, seated behind a card table, his glory days long behind him, but still an amazing raconteur, biting critic and powerful man in GAA circles.

On Sunday RTE Radio from Ireland was present in the park, broadcasting the first game live back to Ireland from New York in over 70 years.

The commentator was Marty Morrissey, a legend in Irish broadcasting circles who was actually born in the Bronx before returning to Clare at the age of 11.  It was great to witness his homecoming and to talk with the man who has become one of the best known voices in Ireland.

The story did not have a happy ending for New York. Sligo roused themselves after the New York goal and scored one of their own before pulling away to win by a flattering eight points.

“Wait till next year,” of course was the New York cry, as it always is for loveable losers, but New York will surely get lucky one of these times.  Then the old venue will ring to the rafters and the old ghosts will surely celebrate. Bring it on!