The story of how I fell in love with the ancient game of Hurling and how I got to play in Croke Park a short three years later. 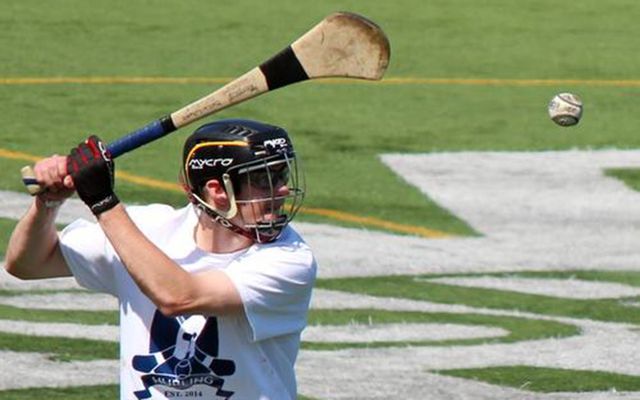 An Irish American tries his hand at hurling. Dave Lewis

My name is David Lewis and I play hurling. Now, since I’m writing this in New York, it would be reasonable of you to assume that I am an Irish student on a J1 visa who was granted the opportunity to write stories for IrishCentral during a year-long stint in New York.

But in this case, your assumptions are wrong. In fact, I’m from Union County, New Jersey, and my parents are not from Ireland. What follows here is the story of how I fell in love with the ancient game of Hurling and how I got to play in Croke Park a short three years later.

It was 2013 and I was in Dungloe, Donegal for a family reunion when I first saw what the GAA was all about. Everybody was excited about the Ulster Championship and all my cousins were in the local pub, Patrick Johnnie Sally’s, where they were televising the match.

Even though Donegal lost, 0-7 to 0-13, I saw the sense of passion, pride, and community the people of the town had and respected that even more so when I found that these athletic representatives of the county were performing amazing feats of athleticism for the love of the game. As I was a soccer player at the time, I wanted to try my hand at Gaelic Football so my cousin and I bought one after the match and kicked the ball around.

When I got home from Ireland that summer, I wanted to see if I could find a Football club in New Jersey. I did a quick Google search but the closest Football club was the Manhattan Gaels, who have training sessions in Randall’s Island, a little bit of a trek for a Union County guy. So, I looked for the closest GAA club I could find and I found the Hoboken Guards, a Hurling club founded by David Cosgrove, another American. I had heard of Hurling before from stories of my Irish cousins playing it but never would have thought that there would be a team let alone a league here.

At first I was a little nervous going to the training session as I watched videos of matches with brawls and players being hit with the sticks, but I remembered my grandfather, Neil Boyle who instilled a passion for Irish history in me and how proud he would’ve been seeing me playing the sport of his ancestors. I went and David was a great teacher as he thoroughly explained the rules and techniques of the game.

That weekend, he even invited me to come play at the first NECGAA (North East Collegiate GAA) tournament. So off I went and I was put on in the last game in midfield. At one point the ball came to me and I wanted to impress the other players so I tried to hit it from around midfield and while I made contact with the ball, it only went about 10 yards. Even though I basically scuffed the ball, all the other kids that were representing the NY colleges teams were so supportive and friendly to me. Which convinced me to stick with it and to start my own collegiate club.

On January 27, 2014, Kean Hurling Club was born as we received support from Kean University’s various departments, and the New York GAA as Simon Gillespie, the Development Officer helped us gain the equipment we needed. In the next couple months, we were competing against the best of the best colleges at Gaelic Park for the National Collegiate GAA’s National Championship. One of the teams, Montana, even featured a future All-Ireland Club Championship winner.

Almost to a year later since my first match, I was back at the NECGAA’s Fall Championship. This time I was captaining my own side. We eventually prevailed over the University of Connecticut on their home turf, winning the championship!

I worked so hard over a year to not only develop my skills as a player but develop personal and professional relationships that would help my GAA career along the way. Another year after that, I was in the Holy of Holies of Hurling, Croke Park.

I was lucky enough to be selected to be on a New York GAA team that featured only American players at the World Games held in Dublin this past August. Running out of the tunnel seemed to be like a dream but it wasn’t a dream, it was reality. Unfortunately, that dream wasn’t meant to be as we lost to North America in the final by a goal.

But now as I reflect on my story, I realize that in the past four years, I have been blessed with experiences that most hurlers in Ireland won’t be able to experience. Who would’ve thought a fourth-generation Irish-American kid would’ve gone up the steps of the Hogan Stand? I know I wouldn’t have.