All aboard the Belfast budget Brexit train

Brexit is already affecting the Republic of Ireland and the North before it even starts. 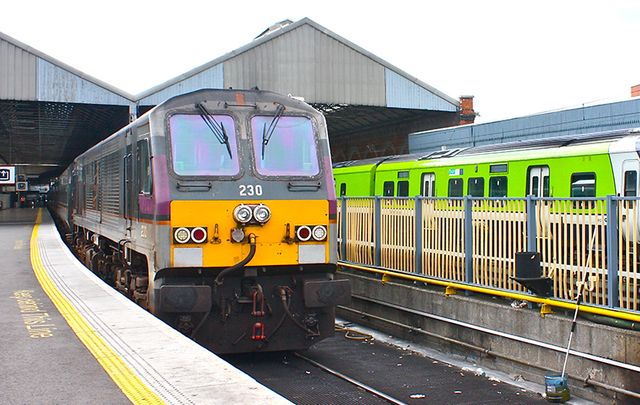 The Dublin to Belfast Enterprise train.

Looking around on the train to Belfast last week, two things came to mind --  Brexit and the budget.

They might not be the first things that most travelers think about as they settle into their comfortable seats on the swish Enterprise train to the North.  But what I could see all around me last week was a visible reminder of both the challenges posed by Brexit and the choices to be made in the upcoming budget which is now just a couple of weeks away. This is a journey we make every month or so to visit relatives who live in the North.  The Enterprise is run jointly by Irish Rail and Northern Ireland Railways and it's a flagship service with at least six trains in both directions every day.

Unlike a lot of other trains here it's fast and modern, a smooth link that shrinks the distance between Dublin and Belfast.  And since we use it regularly, we know it well. But there was a difference last week -- it was much busier than it has been in recent months.  In fact there was hardly a vacant seat to be found when we arrived late, just before departure time.

We walked through several carriages as the train left Dublin in search of a couple of seats together facing in the forward direction.  We found two eventually, but there were very few empty seats left. Apart from the usual sprinkling of American tourists and business people on their laptops using the train's wi-fi, almost all the passengers were senior citizens, the grey-haired brigade on a day out courtesy of their free travel passes.  That's not unusual since this is a favorite journey for senior citizens here using what they call "the free travel." We will come back to the free travel in a moment when we talk about the budget.  But the striking thing last week was that so many of the older folk -- and the younger people who were also traveling -- had empty, rolled-up shopping bags with them.  Some even had wheelie bags and suitcases that seemed to be empty. It was clear what was going on.  Many of them were on a shopping mission to the North to take advantage of the sharp fall in the value of sterling which has happened since the Brexit vote over a year ago. We hear a lot about Brexit these days and the threat it poses to the Irish economy.  In fact we hear so much about it that it's hard not to glaze over when yet another economist appears forecasting disaster ahead.  It all seems a bit unreal.

Yet here on the train we were looking at something very real, hard evidence that Brexit is already affecting us before it even starts. The fact that the euro now buys much more sterling makes a trip North to do some shopping an attractive proposition once again, just like it used to be years ago.  With predictions that parity between the pound and the euro is not too far away, it's a trend that is likely to strengthen in the months ahead.  Sterling has lost more than 15 percent of its value since last year and was bumping along around the 90 pence to the euro level in the last few days. At the moment, looking at the bulging bags on the return journey later that day, it seems to be mainly shopping for alcohol, tobacco, clothes and electrical goods.  But it's likely that people heading north to do their weekly grocery shop are traveling by car rather than on the train, so that is probably happening as well.  And there are already reports that a growing number of motorists on the southern side of the border are now traveling north to fill up their tanks. The fallout for our economy is already making itself felt.  The Central Statistics Office (CSO) figures for the second quarter of this year (April, May and June) show a sharp decline in excise duties of around 300 million euro.  Excise duty applies mainly to alcohol, tobacco and fuel (petrol and diesel)  and is a huge part of annual government revenue. The implications of such a sharp fall in revenue are already worrying, even if it's much too early to be hitting the panic button.  The important thing is that unlike all the predictions and forecasts about what Brexit might do to us.

This €300 million euro drop in revenue is not speculation; it's hard fact evidenced by the official statistics for the period.   Were this trend to continue and intensify it would be a major concern. Of course cross-border shopping is just one result in the fall in sterling due to the Brexit vote. Others that are already visible are the difficulties being faced by small business here which export heavily to the U.K. (like mushroom growers) and now find their sales are worth 15 percent less than they were two years ago.

Garages are also feeling the squeeze as new car sales here fall and more people opt to buy a secondhand prestige car in the U.K.   Thanks to the fall in sterling, car enthusiasts can now bring in a big BMW or Mercedes from the U.K. for what an ordinary family car costs here new. In the context of overall state revenues of over €50 billion annually, a €300million euro drop in excise might not seem that concerning.  But it's the trend that is most important.  And even a €300 million drop in revenue matters because the budgetary situation here is so tight.

The amount of extra money that the minister for finance will have to play with in the budget on October 10 will be between €200-500 million, depending on which set of figures are used.  So a €300 million drop in revenue certainly matters. That brings us to our train lesson for the budget.  The majority of passengers on our train to Belfast last week were older folk using their free travel passes.

Free travel for people who are 66 or more (pension age) was one of the measures introduced by Charlie Haughey during his time as taoiseach.   Like his introduction of state support for artists it seemed like a laudable move, giving a new sense of freedom to retirees. But of course there is no such thing as free travel because someone has to pay for it -- and here it is the taxpayer who pays every time the old folk use the train or the bus.

The national bill every year for this concession is around €80 million.  It is not means-tested, so everyone here who is over 66 can avail of it even though many could easily pay for their tickets.   It's not possible to know, but looking around the train last week I would guess that the majority of old folk who were traveling could have paid their own way. Politicians know this, of course, but any suggestion that the free travel might be means tested has died a quick death because they also know the power of the grey vote.  So they leave it as it is. The "free travel" might not seem to be a big issue in terms of the overall budget.  But it is the principle that is important.

It is a failure that affects other parts of state spending here as well, most notably on state support for children which eats up a big chunk of state revenue.  Child benefit which is currently €140 per child per month is paid regardless of income.  So a family with four children gets €560 a month from the state until the children are 18 whether they need it or not -- and many families don't need it. There are also anomalies in other areas of high state spending, in welfare, health, education, and even in housing supports, despite the fact that  we are in the middle of a housing crisis.  In all these areas there is room for much tighter and more targeted state spending. Given that we are still around €200 billion in debt after the crash (one of the most indebted countries in the world), and given that we still have a very heavy tax burden here aimed at getting rid of the deficit, controlling state spending will be a key test for the new government under our new Taoiseach Leo Varadkar. He has said several times (and again last week) that he wants to help the people who get up early in the morning to go to work by reducing their taxes.  To be able to do this to any significant degree he will have to get state spending here under much greater control.   But doing that and maintaining his popularity in the run-up to the next election won't be easy. It has been said by his critics on the left that behind his trendy liberal image he is actually an arch conservative on economic matters.  We'll know soon enough.