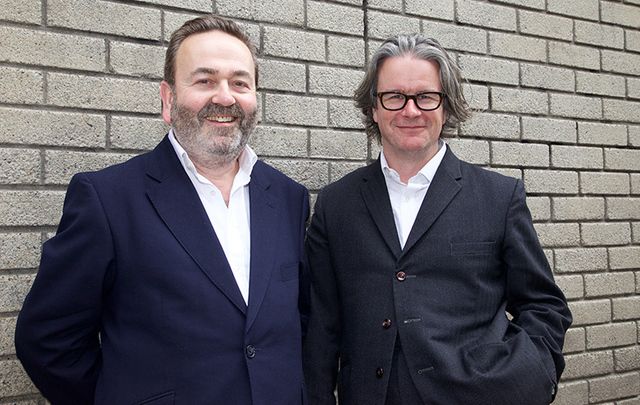 Neil Murray and Graham McLaren will helm the Abbey Theatre.

New Abbey Theatre directors Graham McLaren and Neil Murray were in New York last week to announce their vision for Ireland’s national theater, fundraising for its incredible new program and heralding its planned return to these shores. They talked to Cahir O'Doherty about one of the most challenging and rewarding posts in the arts programming world.

Since it opened its doors to the public in 1904 as the first subsidized theater in the world, Ireland’s national theater, the Abbey, has been a cornerstone of Irish culture, a world class touring company, and a knock down, no holds barred fight.

In a country where culture is policed with the same enthusiasm that the Soviets once paid to the Berlin Wall, the Abbey has often found itself at ground zero, arbitrating what is and isn’t Irish. Sometimes riots have been the result.

It takes a brave soul indeed to put his or her head on this block, so step forward Neil Murray and Graham McLaren, who will split the Abbey director role between them. Both men come from their remarkably successful tenure at the National Theatre of Scotland where Murray was executive producer and McLaren was associate director.

“We applied for the job together,” McLaren tells the Irish Voice. “If you were to divide us in two my background has been as a producer and Graham’s has been as a director. We want to expand the role of the directorship to have both producing and directing at the heart of what we do.”

Murray agrees.  “Two heads coming together meant that we were able to see much more work, and so the program took on a much greater dimension,” he said.

The tagline for the Abbey’s new direction under their stewardship is “What happens next is this.”  It’s a clear as glass mission statement that avoids any charge of stuffy elitism by letting daylight in on the theater’s artistic direction from the outset.

Certainly the lineup under their co-directorship represents a dramatic departure. First up came Enda Walsh’s plays Ballyturk and Arlington, then the Corn Exchange’s excellent Dublin By Lamplight, which was followed by the just opened musical The Train, which tells the story of the journey Dublin feminist activists took to Belfast in the 1970s to purchase the contraceptives forbidden them in the Republic.

Corn Exchange's Dublin By Lamplight was a critical and commercial smash.

Druid’s landmark production of Waiting for Godot will be staged in the summer, then Emma Donoghue’s Oscar winning novel Room will be turned into a co-production with London’s Theatre Royal Stratford East and NTS.

McLaren plans to direct an adaptation of Ken Loach’s magical film Jimmy’s Hall (which will open in Co. Leitrim, where it’s set) and novelist Roddy Doyle will turn his famous Two Pints dialogues into a new play to be staged in pubs all around Ireland.

Auteur director John Tiffany will also direct the vampire fantasy Let the Right One In, to be staged with a new Irish cast. These are only a few highlights of the full and impressive year ahead.

“When we were appointed we said we’re going to investigate the three words you have in your title: Ireland’s National Theater,” says McLaren. “Are we genuinely national, across the nation? Hitherto a little bit of touring and some matinees was how the theater historically has engaged with people outside Dublin. Our experience in Scotland has shown us another way to create work and reach an audience.”

To that end they knew they’d do a show in the first year that would be set in Irish pubs and be made for pubs and tour pubs. Doyle was happy to oblige them.

“The reason is we want the audience to say, that famous actor was in my local pub and your mother and I went to see it and it's the same show you can now see on the West End or on Broadway. That was my national theater and they made it for us first,” McLaren says.

That’s quite a departure from the top down thinking of the old Abbey, an aloof and forbidding house of high culture, a place closed to many citizens since its earliest days.

“What I’m learning very quickly is that the experience of being Irish is many and varied and there are many different experiences across the globe,” says McLaren.

“We have a building in Dublin, but we’re interested in telling the full Irish experience. We want to tell the stories of people whose voices have been denied them or have been silenced or who never had one. I think that’s exciting. I think that’s where Ireland is right now.”

Ireland’s confidence is growing as is its sense of itself, Murray says. “I think the money in your pocket or your gender or sexuality are becoming much more fluid now in Ireland, and I think its time to start articulating that on stage.”

It’s important to have respect and even reverence for the Abbey’s legacy, while trying not to get the two things mixed up, they insist.

“We have the utmost respect but no reverence,” says McLaren. “I think it’s our job to understand that the history and the legacy is wonderful at the Abbey. It really is like no other theater on the world’s stage. But it can’t look back. It has to believe that its best years are ahead of it. That it’s just within reach.”

Murray agrees. “One of the other things that is manifest in the program is that sense of the Abbey as a producing organization. We were very aware that a lot of recent Irish theater makers had not been seen at the Abbey, and one of the things we wanted to do was to break that mold of just having six or seven big shows on the main stage each year. We want a theater that’s for the nation, not just the Abbey.”

They have just closed Dublin By Lamplight, they’ve just opened The Train, and Pat Kinevane’s one-man show is down in the Peacock so their programming really feels like a year long festival rather than just a typical season.

Last week both men were in New York, which means it’s time to talk about the diaspora.  One of the discoveries I have made as an Irish person living in America is how Irish the plays and the outlook of America’s greatest playwright Eugene O’Neill are, I tell them.

O’Neill looks like us, he sounds like us, his characters share our private hopes and dreams. He has so much to tell us but Ireland has never really listened to his voice the way it might, or learned the lessons of this Irishman in exile life. Will that change now?

“Now it bloody will,” says McLaren laughing. “The way you talk about it, I hadn’t really considered it in that way. Now that you say it in that way of course. The truth of all those discoveries is absolutely obvious. I will credit you with the first programming decision.”

Beyond O’Neill, there are a canon of plays that are so hugely influenced by him and by the Abbey’s writers, Murray says.

“We have been looking at more contemporary American plays, often with a big cast, a houseful of women and you think, ‘That reminds me of Tom Murphy, that’s like O’Casey.’  We are very interested in finding those connections, and you phrased it in a brilliant way. Not only is there an Irish diaspora, but the Abbey influenced great American writers and that conversation can be two ways, right up to now.”

Touring New York with the National Theatre of Scotland, both men built important working relationships with the Lincoln Center Festival, St. Ann’s Warehouse, and the Public Theatre among other places. The personal connections are already there, making the return of the Abbey that much smoother when the time comes.

“We expect to be here in the summer of next year and very likely before too. We have to have a presence here, we have to be seen here and we want to be. It’s important to our future as one of the world’s great theater companies,” McLaren says.

For more information on the Abbey, visit www.abbeytheatre.ie.