Donegal woman Mary Ellen McGroarty says the World Food Programme and the UN have "committed to staying" in Afghanistan during this "desperate" time. 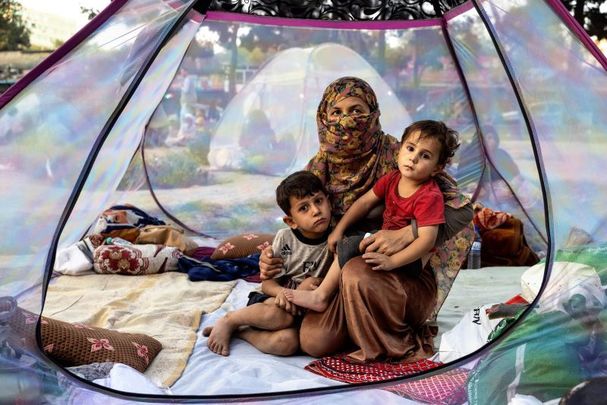 August 12, 2021: Farzia, 28, who lost her husband in Baghlan one week ago to fighting by the Taliban sits with her children, Subhan, 5, and Ismael, 2, in a tent at a makeshift IDP camp in Share-e-Naw park to various mosques and schools in Kabul, Afghanistan. Getty Images

Brave Irish women trapped in Kabul have described the terror of the Taliban capture of the Afghanistan capital – and one said she is still looking forward to a pint of Guinness at home.

Aid worker Mary Ellen McGroarty from Donegal, who heads up the World Food Programme in Afghanistan, a subset of the UN, said she has no intention of trying to leave although Afghanistan is on the brink of a “humanitarian catastrophe.”

McGroarty described running to a bunker when the Taliban swept into Kabul on Sunday. The UN food program head in Afghanistan told the Irish Independent, “We heard gunshots and didn’t know what was happening.  We’ve seen quite a bit of criminality around and yesterday was terrible. It is a scary and nervous time.”

McGroarty, with the UN since 1997 and who arrived in Afghanistan last October, said, “The scale and the pace of how it all happened is what has been the most surprising. We were concerned when I got here about how the situation was going and you could see they (the Taliban) were advancing."

She said: “Our priority is to ensure the WFP and the United Nations stand with the Afghan people at this incredibly desperate time. We’re committed to staying and we’ll do what we have to do to be able to stay.

“You’d be naive to think you wouldn’t be a bit nervous. I’d be telling you a lie if I said I wasn’t nervous, but I’m not by myself. I have a team here and I have to steer the ship. We give each other a lot of support and you do get the wobbles.

"Yesterday, for example, when you hear the Taliban are coming and you hear gunshots, you run to the bunker. It is an historic time to be in Afghanistan, but for all the wrong reasons.”

Elsewhere, Aoife McManus, from Ashbourne, Co Meath, who works in the primary school educational sector, watched armed Taliban fighters on the street from her hideout and waited to be put on a flight from the country later this week.

She told RTE Radio on Tuesday morning, shortly after midday in Kabul, “I have every faith that I will be on a plane and having a pint of Guinness in Ashbourne soon.”

McManus, attached to a non-governmental organization in Afghanistan for two years, added, “There is a sense of panic and fear all over the city. It’s the fear of the worst expectations.”

She and her colleagues left their work compound on Sunday. “We were all crying. Everybody was crying because of the expectations of what things are going to be like. All the work we’ve put into education; that it might all be for nothing.”

In a hideaway near Kabul Airport, McManus said there was Taliban encouragement to continue the work she and her colleagues were doing. She said, “This situation at the moment is a charm offensive, but nobody believes it.”

With obvious care for members of her family likely to be listening, she talked of a number of “hairy situations” over two days, with the circumstances changing frequently and plans changing rapidly which required moving from place to place.

On Monday night, she had seen women walking on the street as there were a lot of displaced people. The women were not wearing burkas, “just the normal hijab.”

Her message to her family was that she was as safe as she could be and that every effort was being made to get home as soon as possible. She said she would be heading to the airport as soon as it was clear.

In Ireland, Afghan native Meena Gulshanyar, who has been living and working in Dublin for 18 years, told RTE that she spoke on Monday to her sister and extended family who live in Kabul and do not want to live under Taliban rule. They were hoping for a visa to move to Tajikstan or Iran, but it was hard to get a visa and they were trapped in Kabul.

She had lived under the Taliban when she was in Afghanistan, before moving to Ireland. She added, “There was no work, no education, no freedom of speech, no social life; there was nothing, absolutely. It was horrible.”