Climate change: Irish seaweed could be the answer to curbing cow methane

Ireland currently emits more methane per capita than any other EU member state and researchers hope that seaweed feed additives can help reverse the trend. 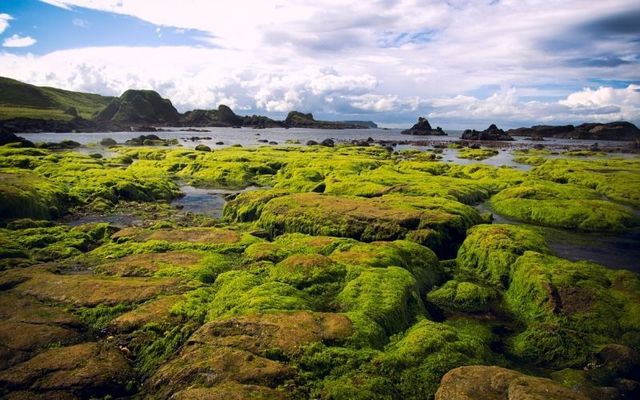 Seaweed found on the west coast of Ireland could be fed to sheep and cattle in a bid to prevent them from breathing out so much methane.

Scientists have tested more than 20 different types of seaweed from the west coast of Ireland as part of a project coordinated by the Irish agri-food authority Teagasc.

The project aims to tap into Ireland's seaweed harvesting industry, an ancient tradition that has seen a revival in recent years.

They have also tested dozens of seaweed types found in the UK, Germany, Sweden, Norway, and Canada as part of the project.

Ireland currently emits more methane per capita than any other EU member state and some scientists are skeptical whether seaweed feed additives can help reverse the trend.

However, scientists in the US and Australia have already demonstrated that a seaweed type known as Asparagopsis can have a dramatic impact on methane levels when small quantities of the seaweed are added to feedstock.

Asparagopsis has been shown to reduce methane emissions by up to 80%, but it is not easy to grow in northwestern Europe, leading Irish scientists to turn to native seaweeds instead.

Researchers are searching for an abundant source of native Irish seaweed that helps drastically reduce methane emissions, although they said that it is unlikely that any locally-sourced seaweed would have as dramatic an effect as Asparagopsis.

Maria Hayes, the leader of the Sea Solutions project, told Reuters that her team had achieved between 11 and 20% reductions in methane levels in early trials.

"We have identified some brown seaweeds that are very positive and they're producing results," Hayes told Reuters.

Hayes said that the reductions would not be a "silver bullet" but added that they can significantly reduce methane emissions.

However, researchers do not currently have a plan for scaling up the production of seaweed if their tests prove successful. They are currently tapping into a network of seaweed harvesters who have revived an ancient Irish tradition dating back to the 5th century.

Hayes' team is also exploring how they can add seaweed into the Irish cattle farming system, which predominately feeds cows a grass-based diet.

The Sea Solutions project tests methane levels by using a solar-powered machine to measure the level of methane in a cow's breath before and after they eat the seaweed additives.

Sharon Huws, a professor of Animal Science and Microbiology at Queen's University Belfast, told Reuters that it takes a minimal amount of seaweed to make an impact on methane levels.

"The levels that are used to feed ruminants are very, very small so you don't need to get a lot of it in order to get an impact."

The Irish Government signed up to a pledge to cut global methane levels by 30% by 2030 at the recent COP26 event in Glasgow and aims to cut agricultural methane by 10% by the end of the decade.

It also aims to achieve a 50% reduction in non-agricultural methane in the same period.

Ireland is one of the biggest exporters of beef in the European Union, with cattle populations increasing by 10% over the last 10 years to 7.4 million.

The Climate Watch database says that Ireland has by far the highest per capita output of methane in the EU.

The Irish Government is reluctant to downsize the number of cattle in Ireland and is instead exploring alternatives that can help reduce methane levels without impacting the Irish agriculture industry.

Government ministers believe that seaweed feed additives are a viable means of reducing methane levels, while they are also examining the potential of genetic research and reducing the average age that a beef cow is slaughtered at.