Dublin Airport has shared an emotional video of family and friends across Ireland being reunited at the arrival gates with their loved ones in the lead up to Christmas Day. 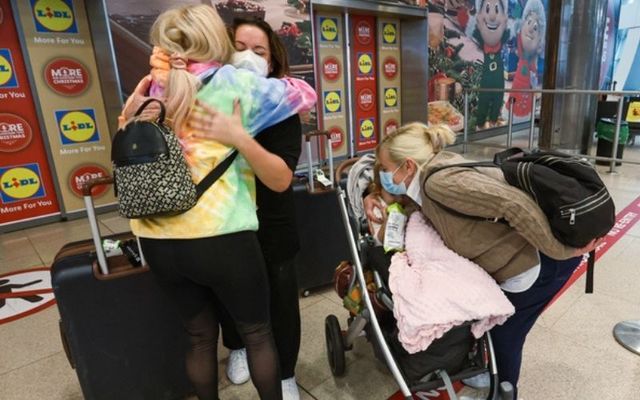 Pictured at Dublin Airport, Amy and Lorraine O’Connell greeting Deralyn O’Connell and baby Olympia after they made the trip from Orlando, Florida. Rolling News

Dublin Airport has released a video of heartwarming reunions witnessed at their arrival gates during the Christmas season.

Family and friends across Ireland will be reunited with loved one's this week in the run-up to Christmas Day after being separated over the past year due to Covid.

In the emotional video shared by Dublin Airport, passengers expressed their delight at finally being able to be together once more, with some shedding a tear at meeting their grandchildren for the first time.

The busiest day during the Christmas season was expected to be yesterday, Sunday, December 19, followed closely by this Thursday, December 23.

However, the airport has also revised downwards the number of people it anticipates to see coming through over the festive period.

Before the latest travel restrictions were introduced last week, it had projected 1.25m would travel through the airport for the whole month of December

It now says around 850,000 people are expected to travel through Dublin Airport between Friday 17 December 2021 and Tuesday 4 January 2022.

A spokesperson for Dublin Aiport also confirmed that preparations are being made for Santa's flight plans this Christmas Eve.

"We are maintaining close contact with the Irish Aviation Authority to monitor Santa’s progress over Irish air space, and to ensure that his reindeer are assisted with a smooth landing.

There will be no flights on Christmas Day to make sure Santa has the skies to himself as he approaches Ireland from the North Pole after midnight on Christmas Eve. Everyone can help ensure he maintains social distance by being tucked up early for bed on the night and stay fast asleep."

Last Friday, the Irish government announced an 8 pm closing time for hospitality including cinemas and theatre to last into 2022.

The number of spectators at sporting events is now limited to 50% capacity, with a maximum of 5k people.

Weddings receptions will be allowed to continue until midnight, with a limit of 100 people.

There has been no change made to the number of households who can visit with each other, which remains at four. There has also been no change in the allowance of intercounty travel in the Republic of Ireland.

While all people arriving in Ireland must continue to present a negative antigen or PCR test in line with their vaccination or recovery status.

The possibility of further Covid-19 restrictions has been dismissed and according to the Irish Examiner, sources have confirmed that Ireland's Chief Medical Officer Dr. Tony Holohan has said although the Covid situation would be monitored closely, the reports are "entirely speculative".

Public health officials have confirmed that the Omicron strain of Covid-19 is now dominant in Ireland and that it now makes up more than half of new cases.

However early data from Denmark and South Africa suggests there may be lower hospitalization rates with the new Omicron variant of Covid-19.