Christmas is canceled: Irish pubs and restaurants to close at 8pm until Jan 2022

The Irish government has announced an 8pm closing time for hospitality including cinemas and theatre to last into 2022. 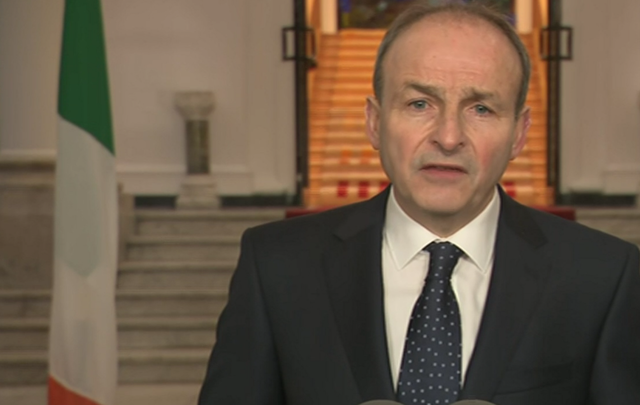 Taoiseach (Irish leader) Michéal Martin addresses the nation as pubs and restaurants to be closed from at 8pm until Jan 2022. RTE news still

The Irish government has announced an 8pm closing time for hospitality including cinemas and theatre to last into 2022.

Ireland's leader Michael Martin announced, on RTE's Six One News, that the Irish government has agreed to implement an 8pm closure of hospitality venues, live events including cinemas and theaters, from Sunday, Dec 19, 2021. These limitations will stay in place until Jan 30, 2022.

The HSE has announced that the Omicron variant of Covid now accounts for 35% of cases and it's expected to become the dominant variant in Ireland within four to five days. The new variant spreads two to five times faster than the Delta variant.

Ireland's leader, Martin, said "It spreads so aggressively throughout all age groups that we are likely to see infections at a rate that is far in excess of anything we have seen to date. It is that serious."

Under the new Covid restrictions agreed by the Irish government the number of spectators at sporting events are limited to 50% capacity, with a maximum of 5k people.

Weddings receptions will be allowed to continue until midnight, with a limit of 100 people.

There has been no change made to the number of households who can visit with each other, which remains at four. There has also been no change in the allowance of intercounty travel in the Republic of Ireland.

"We just need to get to the other side of this Omicron wave as safely as possible.

"This Christmas, please be safe and look after each other."

Ireland's National Public Health Emergency Team had recommended a closing time of 5pm. Senior Government sources had expressed surprise at the scale of what has been recommended.

Speaking to RTE the Licenced Vintners Association said the 8pm closing time was "no use to anyone". They added they would "rather be officially closed than go with lockdown in camouflage".