Former President of Ireland Mary McAleese criticized Pope Francis after he approved a Vatican document that stated "impossible for God" to "bless sin" in relation to same-sex marriage. 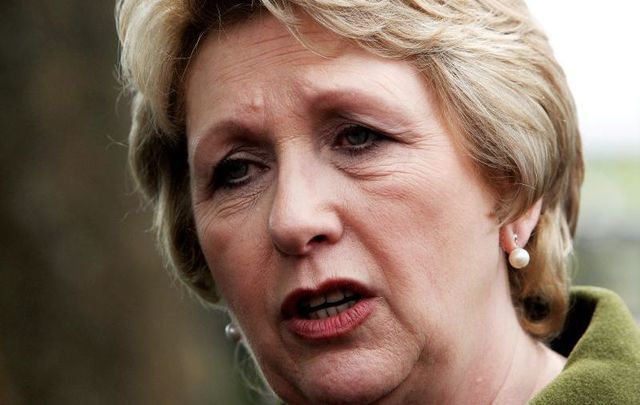 McAleese has spoken out against the Catholic Church on numerous occasions. Getty

Former President of Ireland Mary McAleese has issued a scathing criticism of Pope Francis after the Pope approved a Vatican document that ruled that the Catholic Church doesn't have the power to bless same-sex marriages.

Pope Francis approved a Congregation for the Doctrine of the Faith (CDF) judgment that stated "the Church does not have, and cannot have, the power to bless unions of persons of the same sex," drawing criticism from McAleese and the Association of Catholic Priests (ACP).

She also said that Pope Francis is "the pope who toes the old hard-line".

In a letter penned to Catholic Primate Archbishop Eamon Martin and seen by The Tablet, McAleese described the Pope as a "populist" and the CDF document as "withering".

She said the recently-approved CDF document features "unbearably vicious language which can only have brought more heartache to our gay children and to us their families".

She said that the Catholic Church had fired a "missile" of heartache and hurt.

McAleese noted that the Catholic Church runs 90% of Irish primary schools and 50% of secondary schools and said that children had the right not to be exposed to "cruelly-worded teachings that conduce to homophobia".

She called on "even one" Irish bishop to publicly acknowledge that the document's language was cruel.

Meanwhile, the ACP issued a statement on March 18 claiming that the CDF document was "unfortunate and unwise" in terms of both content and timing.

The ACP criticized the language in the CDF document, while the association additionally said that it was "breathtaking" that the CDF assumed with certainty that they knew "what God can and cannot do".

"While it says that gay people are loved and valued by the Church, it then states that they are sinners, that their loving relationships are fundamentally opposed to God’s plan for creation," the ACP statement read.

"The certainty with which they assume what God can and cannot do, is breathtaking. It seems fair to say that gay people, reading this document, will not feel loved and valued."

The ACP said that the document was poorly timed considered there was an initiative to launch a process whereby people will be asked for their views on all aspects of church life.

"Following on from this judgemental and discriminatory statement, it will be hard for gay people to believe that Church authorities will be open and welcoming of their views.

"The leadership of the ACP is saddened and disappointed by this document. It is increasingly difficult to remain hopeful of an inclusive church."

Cork priest Fr. Tim Hazlewood, one of the signatories of the ACP statement, responded to the Vatican document and said that he would bless the union of same-sex couples.

"Just two days ago there was pieces of weed that grows in the ground and I blessed them. I blessed shamrock, now if two people stand in front of me and they love each other and they are committing to each other for the rest of their lives and I bless shamrock and wouldn’t bless them. I don’t think there’s a doubt or a question there," Fr. Hazlewood said on RTÉ Morning Ireland.

"In Ireland, we’re going to have a synod in the next five years and the bishops have said they want people on the margins to be part of that, would any gay person come near a church that says things like this?"