Irish mother describes terror of being trapped by Hurricane Irma

"It's awful, absolutely awful, we're just waiting and not knowing what could happen, that's the worst part.” 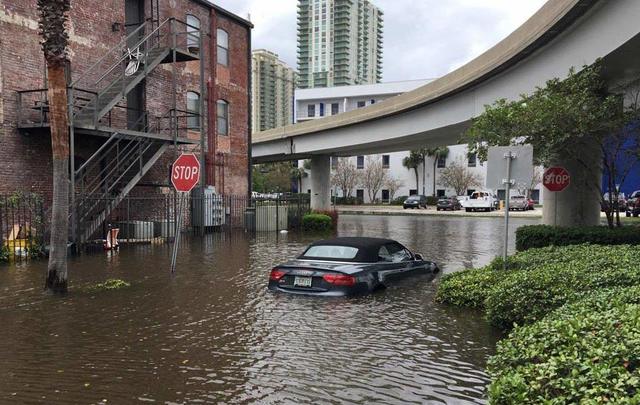 Downtown Jacksonville in the wake of Hurricane Irma. Linsey Davis/Twitter

An Irish mother has spoken of her horror at being trapped by Hurricane Irma as it pounded the coast of Florida.

The category 4 hurricane dropped over a foot of rain on the Sunshine State in the course of just a few hours. At least six people in the US have died as a result of the hurricane and 6.5 million were ordered to evacuate certain high-risk areas.

"We haven't got a storm shelter so we've taken the internal doors down and have put them up against the windows.

"We know the windows will blow out but I just hope that the complex doesn't collapse into itself."

"Nobody here has ever experienced anything of this magnitude, we're watching the weather and it's scary beyond belief.

"You have to be residents to get any aid so we don't qualify. We also were not able to take out insurance.

"It's scary as we've no other family here, it's just ourselves.

"The British and Canadian governments have said they will help any residents here who are affected by Irma so I'm hoping that the Irish government will say the same."

Whilst O’Higgins and her kids braved the hurricane out in their home an estimated seven million people evacuated the coastline before the storm hit.

Most, however, decided to stay put and footage released by Florida police even shows two people who decided to try and ride out the storm in a boat.

Martin County later confirmed in a tweet that the pair had been rescued.

“MCSO Marine Rescue complete. Everyone is safe. Good job everyone,” they wrote.

Whilst the storm had since receded the danger has not and many people have ventured down to beaches almost wholly drained of water that the hurricane has sucked up in its path.

In Tampa Bay, locals ventured out onto what was once the ocean and pristine beach but now strangely dry.

Their actions drew quick rebukes from meteorologists and Florida Governor Rick Scott who warned people the water could come racing back at any minute.

“The water will come rushing back with a vengeance. They won’t have time to get out when it begins,” scientist James Spann cautioned on social media.

As #Irma approaches, water is receding from bays, rivers & other waterways. DO NOT GO IN. The water will surge back & could overtake you.

Law enforcement has since begun ordering people away from the at risk areas.

And it’s not just humans that are in trouble: a number of the iconic manatees that populate the Florida coast were found stranded ashore.

Locals rushed to load the animals onto to tarps and hauled them to deeper water and safety.