The announcement comes four years after the senior women's team held a remarkable press conference where they accused the FAI of treating them like "fifth-class citizens". 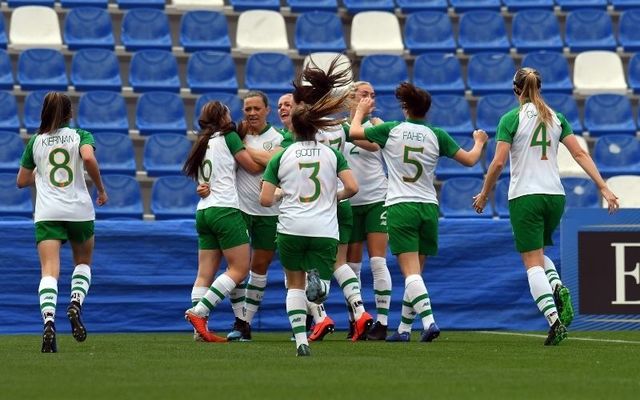 The Irish senior women's team celebrate with captain Katie McCabe after she scores against Italy in an international friendly in 2019. Getty

The Irish men's and women's international soccer teams have reached a deal with the Football Association of Ireland (FAI) to receive equal pay.

The FAI announced in a statement on Monday afternoon that the senior men's team has agreed to a reduction in their international fees, while the FAI agreed to match that contribution so that the senior women's team's fees are increased.

A historic day for Irish football as the FAI agrees equal pay deal with WNT & MNT squads ahead of their World Cup qualifiers ?

The announcement comes four years after the senior women's team held a remarkable press conference where they accused the FAI of treating them like "fifth-class citizens" and alleged that they were forced to change out of team tracksuits in airport bathrooms.

The players also alleged that they received no match fee, bonuses, or loss of earnings for the time given to represent Ireland.

"This is a great day for Irish football. We have taken a huge step forward with this deal and have shown the world what can be achieved through unity as we offer male and female international players the same opportunities," McCabe said in a statement.

"I am very proud as Ireland captain of the work that has been put in to get us to this point, not just by the current team but by so many Irish players in the past."

McCabe also credited Seamus Coleman and the rest of the senior men's squad for being "brave" enough to support the bid for equal pay.

"Seamus Coleman and his team-mates in the senior men's squad also deserve credit for being brave enough to support us in such a progressive way on this issue. It is really appreciated."

Coleman, meanwhile, said that the men's team was "delighted" to help secure fair and equal treatment for their female counterparts and said that he hoped other national teams followed Ireland's example.

"This deal is the right one for everyone who plays international football for Ireland, no matter which team they represent. We have been working towards this agreement for some time now with Katie, Jonathan and Ciaran and I hope this acts as an inspiration to many other nations to follow suit," Coleman said in a statement on Monday.

FAI CEO Jonathan Hill said that the decision represented "an important milestone" for the FAI.

"This is another important milestone in the FAI's own transformation journey and I believe this equal pay programme shows us to be the progressive footballing nation we have always aspired to be," Hill said.