Paul Walsh, who captained the Kerry minor team to the All Ireland in 2018, was photographed presenting the Brazilian icon with a Kerry GAA jersey at Ronaldinho's house in Rio de Janeiro. 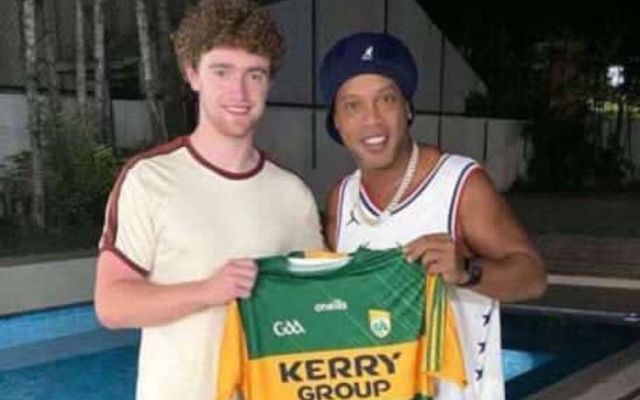 Walsh, who captained the Kerry minor team to the All Ireland in 2018, was photographed presenting the Brazilian icon with a Kerry GAA jersey at Ronaldinho's house in Rio de Janeiro.

What's more, the pair were also filmed playing a game of keepie-uppies inside Ronaldinho's house.

It is still unclear how a Gaelic footballer from Brosna in County Kerry came to befriend a former World Cup, Champions League, and Ballon d'Or winner, but rumors circulating on social media claim that Walsh built up a rapport with Ronaldinho's brother Roberto on Instagram.

The pair reportedly exchanged messages on the social media platform, prompting Roberto to invite him to Rio de Janeiro.

Look at our own Paul Walsh @BROSNAGAA over visiting the one and only Ronaldinho! Paul you might mention to him that he could win a house in Kerry if he buys a ticket here https://t.co/c5ky6E2sQR and then you could show him around the beautiful Kingdom #Ronaldinho #ReturnVisit pic.twitter.com/JhBnqjYVI5

Balls.ie reports that the encounter has taken people by surprise in Walsh's native Kerry and at Brosna GAA club, where he was expected at training on Tuesday evening.

A person associated with Brosna GAA told Balls that the meeting was a "complete and utter mystery" and said that Walsh was in Kerry very recently.

It also appears that Walsh has convinced Ronaldinho to enter the Brosna GAA club raffle for a new Volkswagen Golf after the club's Twitter account posted an image of the Brazilian icon's ticket.