Catherine O'Connor, a retired probation officer from Washington State, reported her grandson Joshua to the police in 2018 after she discovered a notebook outlining his plans to carry out a school shooting. 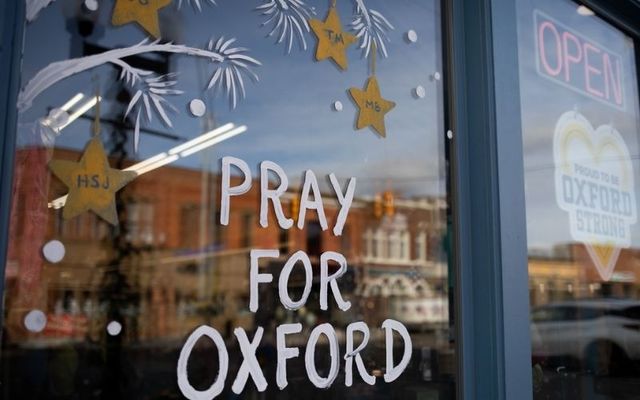 An Irish-American grandmother who turned her grandson in to prevent a planned school shooting in 2018 has said that she is "outraged" by the negligence of the parents of Ethan Crumbley, who allegedly killed four people in a school shooting in Michigan last week.

Catherine O'Connor, a retired probation officer from Washington State, took the difficult decision to report her grandson Joshua to the police in 2018 after she discovered a spiral notebook detailing his plans to carry out a school shooting.

The notebook contained reconstructions of previous school shootings and a detailed plan to carry out his own attack, including the guns he would use and his plans to build his own bombs.

He detailed that he would zip tie the doors so that "bitches can't escape" and wrote that he planned to set off his first bomb by the bleachers before embarking on a killing spree and eventually taking his own life.

"I Need to make this shooting/ bombing... infamous," he wrote. "I Need to get the biggest fatality number I possibly can."

He planned to carry out the massacre on April 19, the day before the anniversary of the Columbine school shooting.

Catherine O'Connor, who was Joshua's guardian, searched his room after discovering the notebook and found a semi-automatic rifle hidden inside a guitar case.

She phoned the police, who later discovered bomb parts in her grandson's bedroom.

Joshua O'Connor received a 22-year prison term for planning the school shooting, despite his grandmother's pleas for mercy.

She was described as a hero by the judge during the trial but said that she hated the term, arguing that she was just trying to help her grandson and had no other choice.

She told the Washington Post that her grandson's trial has eroded her faith in the US justice system but revealed that she agreed with a Michigan prosecutor's decision to charge the parents of accused school shooter Ethan Crumbley, who allegedly killed four students at Oxford High School last week.

Oakland County Prosecutor Karen McDonald has charged both Jennifer and James Crumbley with four counts of involuntary manslaughter, the most serious charges ever brought against the parents of an alleged school shooter.

On the day before the shooting, a school teacher caught Ethan searching for ammunition on a school computer. The school informed his mother, who texted her son: "Lol. I’m not mad at you. You have to learn not to get caught."

Just hours before the shooting, a teacher observed one of Ethan's drawings which detailed a person shot dead with "blood everywhere".

The drawing also included the caption: "The thoughts won’t stop. Help me."

This time, James and Jennifer Crumbley were summoned to the school but refused to take their son home or search his backpack.

The Crumbleys have pleaded not guilty to the counts and their attorneys argue that the 9mm Sig Sauer was kept in a locked drawer.

Catherine O'Connor said that she was baffled by the Crumbley's decision not to search their son's backpack when they were summoned to the school.

"That’s so irresponsible, beyond belief. That just outrages me," she told the Washington Post.

She said that she was always conscious of preventing her grandson from going near guns. She and her husband kept guns in the house, but they were always hidden and equipped with trigger locks.

She was powerless to prevent him from buying his own semi-automatic rifle when he turned 18.

O'Connor was one of 67 people who foiled a planned school shooting between 2006 and 2018, according to the Secret Service’s National Threat Assessment Center, but she was one of only eight parents or grandparents who "disrupted plots".

"These are definitely not impulsive acts. They are planned in advance, and that planning can occur over days, weeks or months or years."