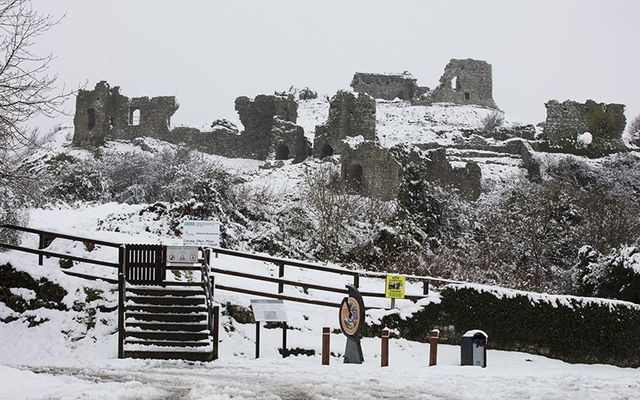 Ireland has experienced severe frost, ice and snow on high ground this weekend with the lowest temperature of 20.1F (-6.6C) recorded in Dublin on Sunday night.

Temperatures around the country plummeted, over the weekend, from between 28.4F (-2C) and 17.6F (-8C) in Leinster, Ulster and east Connacht.

Five flights to London Heathrow from Dublin Airport were cancelled on Monday morning, along with two flights due from Heathrow. In Cork two flights from Heathrow were canceled due to knock on effects of the bad weather. Passengers are advised to contact their airlines. The affected airlines are Aer Lingus and British Airways.

I’ve made to Lough dan on foot, do not attempt to drive, roads are impassable #Wicklow #Ireland #Sneachta pic.twitter.com/cH1yC0mkzm

Over 50 schools across Ireland were closed while Irish Rail reports that all trains are running but some will face delays on Monday.

Drivers have also been advising to use caution. Gemma Ryan from AA Roadwatch has said “The worst affected counties appear to be Galway, Roscommon, Sligo, Donegal and Cavan with widespread frost across the country.

"When driving in such conditions use your dipped headlights and remember stopping distances are up to ten times longer in ice and snow, so leave plenty of space between your car and the car infront and allow yourself extra time to reach your destination."

Lots of #Sneachta in Kilkenny pic.twitter.com/y797X5SdL1

Monday’s temperatures will continue to be low across the country, between 2 and 5C, and wintry showers are expected across the north and west of Ireland, mainly sleet. By Tuesday morning the frost will clear, and rain will move east across the country.