The Irish flag was displayed on a big screen outside of Buckingham Palace on Saturday during The Platinum Party at the Palace for Queen Elizabeth's Platinum Jubilee. 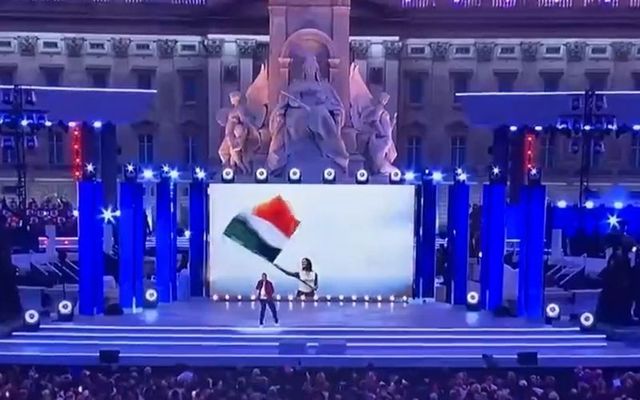 The Irish flag was featured in a video montage displayed outside of Buckingham Palace on June 4 as part of the Queen's Platinum Jubilee celebrations. BBC

The Irish flag was featured in a live, televised video montage during The Platinum Party at the Palace in London on Saturday, a part of the four-day celebrations for Queen Elizabeth’s Platinum Jubilee.

The Irish flag was apparently used to represent Northern Ireland during a segment about sporting in the UK, the News Letter reported on Sunday.

During the video montage, a woman waving an Irish tricolor appeared briefly on the big screen outside of Buckingham Palace in between representations of Wales and Scotland.

As the montage played, comedian and actor Doc Brown performed a rap that said in part:

"But see those three lions, you know what they do to me,

I see them standing for strength, love, and unity,

Same with the red dragon, shamrock, and thistle,

White, black, and brown we unite at the whistle

Sport is the leveler, now to the finish,

Son of an immigrant proud to be British."

Irish man Dermot O Callaghan spotted the blunder and shared it on Twitter:

What’s that about, tricolour! Since when are we British? Great show but pic.twitter.com/QY9Po6SMG5

Just for next time @BBC this is not the flag of Northern Ireland. pic.twitter.com/lfYvAPKCRJ

A spokesperson for BBC responded to the error on Sunday, saying: “The incorrect flag appeared in a brief montage during Doc Brown’s appearance last night.

“We apologise for the error and the sequence will be edited on iPlayer.”

The Republic of Ireland, which has not been part of the United Kingdom since 1922, uses the tricolor flag, or bratach na hÉireann, which was given constitutional status under the 1937 Constitution of Ireland. Northern Ireland, a part of the United Kingdom, uses the Union Jack flag, though the Ulster Banner is sometimes used, especially amongst loyalists and unionists.