Freshwater pearl mussels date back hundreds of millions of years to the time of dinosaurs. 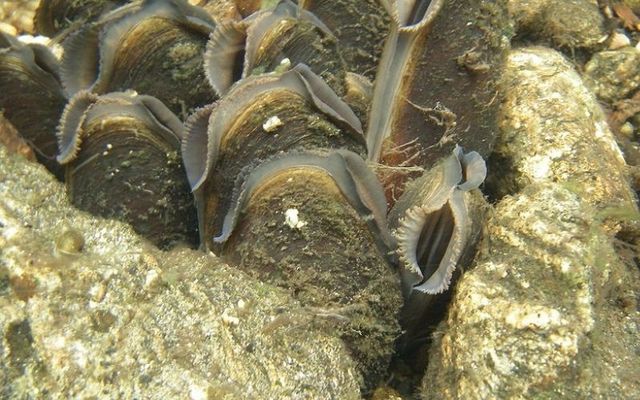 Irish farmers have joined forces with scientists in a bid to prevent the freshwater pearl mussel - one of Ireland's oldest and rarest animals - from going extinct.

Fossil records show that the freshwater pearl mussel has existed for hundreds of millions of years and dates back to the time of the dinosaurs, making it the oldest species in Ireland. The mussels also live incredibly long lives, with some mussels alive today born in the 1890s.

The freshwater pearl mussel spends much of its life burrowed in the riverbed and feeds by sucking in as much water as it possibly can, before filtering tiny particles of food for it to eat.

"They might look like they’re doing nothing, just sitting there on the river bed for the whole of their lives, but they’re actually filtering massive amounts of water. They're cleaning our water, basically," she told RTÉ.

On an average day, the mussels suck in over 100 pints of water, but they are facing an existential crisis due to the deterioration of water quality over the last century.

Rivers polluted with silt, nitrogen, or phosphorus can be lethal to the freshwater pearl mussel, causing them to choke and die when they filter out the pollutants from the water they suck in.

The depletion of freshwater salmon and trout in Irish waters has also proved devastating for the mussels. Salmon and trout play a key role in the early development of freshwater pearl mussels; young mussels spend around nine months clinging on to the fish's oxygen-rich gills almost as soon as they are born.

The decline of salmon and trout populations, coupled with river pollution, has been disastrous for the freshwater pearl mussel and their population across Europe has fallen by 90% over the past 100 years.

In Ireland, where about half of the European population of freshwater pearl mussels now live, the problem has been particularly disastrous.

However, farmers along Ireland's west coast have now joined forces with scientists in a bid to improve water quality in Irish rivers with a view to restoring populations of the rare mussels.

From Kerry to Donegal, farmers are involved in a new publicly-funded project that awards funding based on how their farm improves water quality.

As part of the project, farmers' fields are ranked between one and ten, with higher scores returning larger annual payments.

The scheme includes roughly 450 farmers and it is hoped that if enough farmers can achieve a high ranking, then water quality will improve and the freshwater mussels will flourish.

Colm Galvin, a young farmer from Mayo who is involved in the project, for example, has drastically reduced the amount of silt and run-off that flows into a nearby river from his farm since he signed up to the project along with his father Martin.

The father and son have installed a series of traps on their farm to ensure that any silt is filtered off before it reaches the river in the hope that water quality will soon improve.

Colm Galvin told RTÉ that the project has created a sense of community among Irish farmers, who are now determined to achieve the highest possible score for their fields.

They have even set up a "pearl mussel" WhatsApp group to do so, he said.