Irish expats around the world return home during COVID-19 pandemic

The Department of Foreign Affairs has fielded inquiries from 8,000 Irish people seeking to return home during the pandemic. 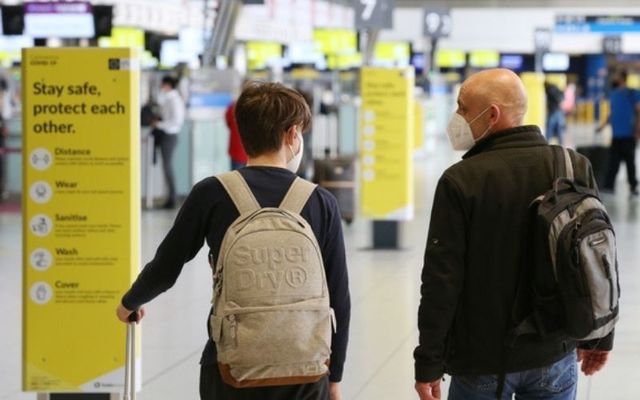 Travelers at Dublin Aiport during the COVID-19 pandemic. Rolling News

The number of Irish people returning home to live is at its highest level in 13 years, according to a new Central Statistics Office (CSO) report, and that figure is expected to rise even more in the coming months.

The COVID-19 pandemic has forced many Irish ex-pats to consider a move home due to the economic repercussions of the pandemic and an increased concern for family members back home.

A number of groups working with Irish emigrants abroad have reported a dramatic increase in inquiries from Irish ex-pats seeking to return home since the outbreak of the virus.

Safe Home Ireland, a charity helping Irish people abroad return home, reports that it has been busier than ever since March when COVID-19 began to affect countries around the world in earnest.

The charity dealt with over 2,600 inquiries from concerned Irish ex-pats between March and August this year, up 24% on the same period last year, and chief executive Karen McHugh said that there is no doubt that COVID-19 forced Irish emigrants to ponder a return home earlier than they planned.

"Obviously COVID accelerated a lot of interest in moving home and I think it's a time when people abroad are thinking of family, are thinking of loved ones, who may have been thinking of returning home at some point in their futures, but it has become a lot more urgent," she told RTÉ News.

The Department of Foreign Affairs, meanwhile, has fielded around 8,000 inquiries from Irish people abroad seeking to return home since the outbreak of the virus in March.

McHugh said that some Irish people have been able to return home in a planned way, staying with family until they can get back on their feet.

However, she said that some people found themselves in a crisis abroad and had no family to return to in Ireland or could not afford to rent accommodation, leading to difficulties securing emergency accommodation to self-isolate in when they touched down in Ireland.

Safe Home Ireland and the Crosscare Migrant Project, another group representing Irish people abroad, both noted that there has been a shortage of emergency accommodation for those returning to Ireland.

McHugh said that some people had even been forced to live in tents due to the shortage.

"We've had some people who were abroad who are at home here at the moment who are living either in tents or in cars because they have not been able to be provided with emergency self-quarantine accommodation," she told RTÉ.

The impact of the COVID-19 pandemic has been felt the hardest in the United States and the United Kingdom, where the majority of Irish emigrants reside.

In New York, where a significant number of Irish people work in the now-crippled service industry, the situation is particularly dire.

New York-based Ciarán Staunton, from the Irish Lobby for Immigration Reform, said that many Irish people had been forced to leave the Big Apple after they lost their jobs during the pandemic.

He said that a number of people have left because they see no end in sight, pointing to a number of bars and restaurants in New York that have closed their doors for good since March.

Other Irish people have decided to remain in New York for the meantime, Staunton said, choosing to rely on their savings. He said that most people can only do this for a certain amount of time and will eventually have to call time on their life in New York and move back across the Atlantic if things don't improve.

Staunton is calling on the Irish Government to provide more assistance to those trying to move back home, arguing that it is difficult to pack their things and move back to a country they haven't lived in years. He said the Government should do more to make the transition smoother for anyone returning to Ireland.

The Irish Government established the COVID Response Fund in April to support Irish people living abroad. The Government provided a total of €2 million to support centers around the world, while Irish community centers also raised funds through donation drives.