Irish citizens in Afghanistan have officially been advised to avoid traveling to Kabul Airport after fatal explosions in the area have been confirmed. 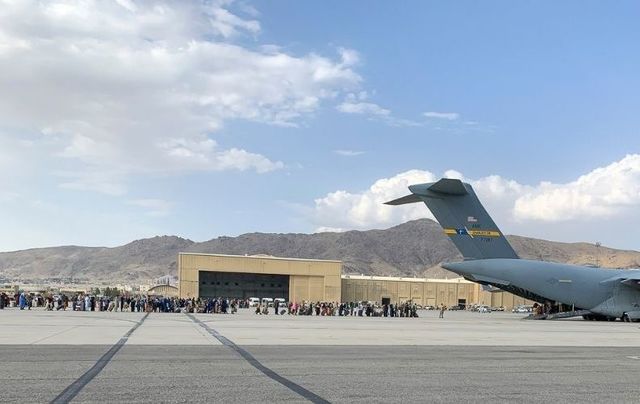 August 21, 2021: US paratroopers assist in the evacuation of non-combatants from Kabul International Airport in Afghanistan. Getty Images

Ireland's Minister for Foreign Affairs Simon Coveney has confirmed that a team of Irish diplomats and military personnel sent to Afghanistan to assist the evacuation of Irish citizens has been withdrawn amid rising violence since the Taliban took over the country earlier in August.

Coveney said on Thursday that Emergency Consular Aid Team (ECAT) sent to aid the evacuation of Irish citizens from Afghanistan has now been withdrawn from the country.

"The pre-planned process of the withdrawal of our Emergency Consular Aid Team (ECAT) mission to Kabul has begun and will continue across the course of today, Thursday 26 August," Coveney said in a statement.

"Irish diplomats and members of the Army Ranger Wing have aided a number of Irish citizens and residents to evacuate from Afghanistan. Those evacuation flights are ongoing today and for security and operational reasons, we will not give detail on numbers until the ECAT has left Kabul."

Coveney additionally advised all Irish citizens who remain in Afghanistan to avoid traveling to Kabul International Airport as gates are no longer open.

A total of 36 Irish citizens have been evacuated from Afghanistan since the fall of Kabul on August 15.

Earlier on Thursday, Coveney said on Twitter that the Irish team in Kabul was "safe."

Our Team of diplomats & Army Rangers in Kabul r safe, busy & doing fantastic work with partners.
We remain in close contact with them to make decisions on exit.
We r also in continuing contact with all Irish individuals & families in Afghanistan to support & advise. @dfatirl

The advice from the Irish Department of Foreign Affairs came just hours before two explosions caused by suicide bombs left 13 people dead outside of Kabul Airport.

Pentagon Press Secretary John Kirby confirmed on Twitter that there had been an explosion near the Abbey Gate of the airport, while a US official told Reuters that at least three US service members were injured in the blast.

Kirby has confirmed that a second explosion has since taken place at the Baron Hotel near the airport.

We can confirm that the explosion near the Abbey Gate of the Kabul airport has resulted in an unknown number of casualties. We will continue to update.

Thousands of people have gathered at Kabul International Airport's Abbey Gate over the past two weeks as part of desperate attempts to flee the country since the Taliban took control on August 15.

Earlier on Thursday, US, British, and Australian officials warned citizens to stay away from the airport due to the threat of an attack by an ISIL offshoot known as the Islamic State in Khorasan Province.

The US Embassy in Kabul advised citizens against traveling to the airport due to unspecified "security threats", while the British Foreign Office warned of an "ongoing and high threat of terrorist attack".

At least 60 people were wounded in the explosion, while children are reported to be among the fatalities.

Meanwhile. Pentagon Press Secretary Kirby rejected reports that the US is preparing to wrap up evacuations in the next 36 hours and said that operations will continue at Kabul Airport until August 31.

"Evacuation operations in Kabul will not be wrapping up in 36 hours. We will continue to evacuate as many people as we can until the end of the mission." Kirby said in a statement.