“The anxiety and knowing that this is off your coast and you’re going to get hit, it’s terrible.” 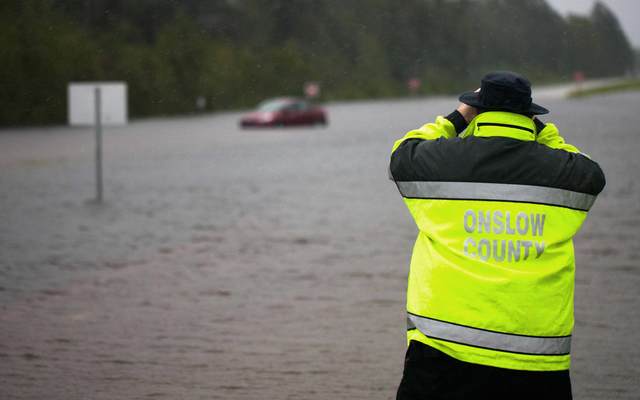 Members of Onslow County emergency look to see if a passenger was still in a car that was overtaken by flooding on US Route 17 outside of Jacksonville, North Carolina on September 15, 2018, during Tropical Storm Florence. LOGAN CYRUS/AFP/Getty Images

A Co Meath woman now living in North Carolina has spoken of the way in the which the community pulled together to get through Storm Florence. There have been at least seven deaths since the tropical storm hit land on Friday, with victims including a mother and her infant child.

“It’s basically like being back at home. The town has pulled together so much. The local community has been amazing,” Maryellen Duren, from Navan, Co Meath told the Irish Mirror.

“The first responders, local police department, linemen and civilian volunteers have all pulled together and saved lives in our town.

The view from #GOESEast shows #Florence still hasn't moved much as the storm slowly slogs inland. Parts of North Carolina have already picked up 20-30 inches of rain, with more on the way. More info: https://t.co/L9AEmb5sG9 #TropicalStormFlorence pic.twitter.com/pYJKeZ1mwG

“It’s really neighbor helping neighbor right now and even though lives were lost and people lost everything, it truly brought out the best in our community.

“Men and women went out in the height of the hurricane in their boats and jet skies to rescue people on the roofs of their houses. They risked their lives for their neighbors.”

Duren made the decision to evacuate her home in New Bern, North Carolina, for a hotel in Virginia on Thursday evening with her two children, four dogs, and cat. Her husband is a US Marine currently stationed in California and the 32-year-old spoke of the worry in dealing with a natural disaster by herself with young children.

The death and destruction wrought by Tropical Storm Florence has been punctuated with stories of bravery, generosity and resilience https://t.co/N9kQdTaQRS pic.twitter.com/vAtKrCLgSo

“The anxiety and knowing that this is off your coast and you’re going to get hit, it’s terrible. If Josh had been there it would have made it a lot less stressful,” she said.

“I wasn’t going to evacuate. For one I’ve never been through this.

“When that first band came in on Thursday morning – and that was just a mini storm that came off a band of the hurricane – and I saw how strong the wind got and how our driveway flooded and our power went, I knew we had to leave.

“They were about to start enforcing the mandatory curfew so I had about 30 minutes to get out of town.

“We left everything. I did not take anything but the kids, my laptop, charger and the dogs and cat. We just had the clothes on our back.

“The kids are the most important. The house I don’t really care about or the stuff.”

The 32-year-old is hoping to return home on Monday or Tuesday of this week but has no clue in what condition she’ll find her home.

“I just saw some footage from around our house and it looks like a mess. It looks like there’s a tree down on two spots, said Duren.

"The real threat could still be ahead ... all that water has to go somewhere," says @PoloSandovalCNN in Lumberton, North Carolina, where communities face a serious risk of flooding after Tropical Storm Florence https://t.co/OQs8pXEapX pic.twitter.com/doZ7VAyVNG

“It looks like there’s one down on our garage and that side of the house and another one down on the opposite side as well.

“I just have to wait. I’m going to try to get home Sunday or Monday. The roads are impassable, that’s the problem. New Bern is submerged.

“A portion of the bridge into it collapsed. If you’re coming from the north, a whole section of that on the right-hand lane has collapsed.”