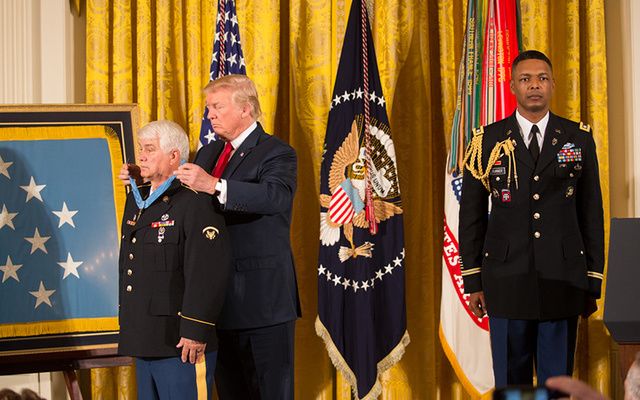 It’s been awhile coming, but an Irish American hero of the Vietnam War has been presented with the Congressional Medal of Honor.

“McCloughan will receive the Medal of Honor for distinguished actions during 48 hours of close-combat fighting against enemy forces near Don Que, Vietnam, from May 13 to 15, 1969.”

McCloughan, then 23 years old, voluntarily risked his life on nine separate occasions to rescue wounded and disoriented comrades in what was known as the Battle of Hui Yon Hill.

“He suffered wounds from shrapnel and small arms fire on three separate occasions, but refused medical evacuation to stay with his unit, and continued to brave enemy fire to rescue, treat, and defend wounded Americans,” the White House statement added.

Read more: The Irish in Vietnam: A new diaspora arises

A member of the Michigan High School Coaches Association Hall of Fame, McCloughan, now 71, is married to Chérie McCloughan. He has two sons, Jamie and Matt, one daughter, Kami, and one stepdaughter, Kara.

McCloughan is the thirteenth Irish American to receive the Medal of Honor as a result of service in Vietnam.

The Medal of Honor is awarded to members of the Armed Forces who distinguish themselves conspicuously by gallantry above and beyond the call of duty while: engaged in an action against an enemy of the United States; engaged in military operations involving conflict with an opposing foreign force; or serving with friendly foreign forces engaged in an armed conflict against an opposing armed force in which the United States is not a belligerent party.

The meritorious conduct must involve great personal bravery, or self-sacrifice, and so conspicuous as to clearly distinguish the individual above his or her comrades and must have involved risk of life.

There must be incontestable proof of the performance of the meritorious conduct, and each recommendation for the award must be considered on the standard of extraordinary merit.

What a moving moment as @POTUS gives #MedalofHonor to specialists James C. McCloughan. As an American I'm proud of this Hero #MAGA pic.twitter.com/TBSR0fgbVd

The medal can be won in war or in peacetime and is presented to a winner by the president acting for the U.S. Congress.

Close to 3,500 Medals of Honor have been awarded and over 2,000 of them having been awarded to Irish Americans.

At latest count, 257 Medals of Honor have been awarded to Irish-born recipients.

Before Monday’s presentation, the most recent Irish American recipient was Navy SEAL Lieutenant Michael Murphy, who was posthumously awarded the medal for gallantry in Afghanistan during Operation Red Wings in June 2005.