Sean Muldoon and Jack McGarry, the owners of New York's Dead Rabbit - winner of the World's Best Bar 2016 - will show off the best of Belfast bars in a new CNN show to air on St. Patrick's Day. 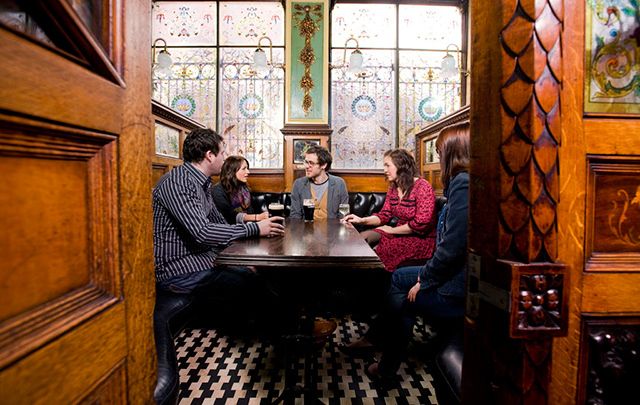 The Crown Liquor Saloon in Belfast - Sean Muldoon and Jack McGarry, the owners of New York's Dead Rabbit - winner of the World's Best Bar 2016 - will show off the best of Belfast bars in a new CNN show to air on St. Patrick's Day. Tourism Ireland

Belfast is getting a visit from CNN but unlike days-gone-by, the visit will have nothing to do with politics. This is because the New York-based Belfast men who run what was voted the world’s best bar are coming home to bring CNN Travel on a pub crawl.

And Sean Muldoon says the haunts he used to frequent across the city will feature in the program.

Sean, along with Jack McGarry, are the owners of the Dead Rabbit in Manhattan, which scooped the World’s Best Bar title in October 2016 after a competition run by Drinks International.

But home is where the heart is and when the news channel approached the duo to plan a tour of Belfast’s finest hostelries, the lads jumped at the chance.

Sean told the Irish Echo he would be suggesting the bars he drinks in when CNN come over, and although nothing has been finalized, he will be telling them the pubs he heads to first on return visits.

And they would be “The Duke of York, Maddens Bar, Kelly's Cellars, The John Hewitt, The Garrick, Bittles Bar, The Spaniard, the Empire, The Merchant Hotel, The Crown, The Shamrock and Mourne Seafood for something to eat.”

The Dead Rabbit, New York, winner of the Best Bar in the World 2016.

Jack McGarry says they couldn’t turn down the opportunity to show off their hometown.

“We're extremely proud Belfast men. I know some people reading this would say you couldn't be that proud if you left it but I think the opposite.

“We've taken the best elements of back home and built them into The Dead Rabbit and talk about Belfast on glowing terms anytime we're asked.

“Unfortunately, we had to leave Belfast to pursue our dreams and break through our professional ceiling at the time.

“We're now beginning to invest in talented professionals from back home to come over and join us. We love going back home and seeing how the city is developing,” he continued.

“We just finished a pop up with Stephen Toman from (Michelin Star restaurant) Ox and it gave us unbelievable pride for Belfast.

“Stephen and his team are doing amazing things back home also. We'll be doing something with Stephen at Ox next year at some point.

“There is so much talent and creativity back home and it's being actualized now. Belfast is in a great place at the moment.”

Sean said the only downside was that he won’t be able to show CNN two bars that no longer exist in their original form.

“The old Kitchen Bar and the old White’s Tavern were great,” he said.

The CNN broadcast is due to air on St. Patrick’s Day.