Ultra runner Tom McGrath beat alcohol abuse to run 200,000 miles for charity. At age 67, he shows no signs of stopping. 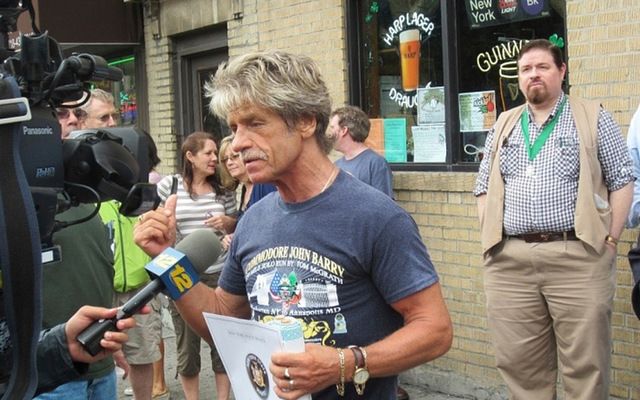 We don't always get to meet our heroes.

They live deep in the golden pages of books and larger than life silver screens.

On June 3rd, people will have the chance to see a truly rare individual: Tom McGrath.

To many, he is a legend of the Gaelic Football pitch, to others he is the trans-American record holder, running from the Atlantic to the Pacific in 54 days.

And to some, he is the “black sheep,” the name of his mid-town Manhattan bar, and partly the title of his new autobiography.

Tom is a man with a story to tell and starting early June he will take to the road again with a book signing and motivational lecture tour.

Tom has overcome alcohol abuse, while at the same time owning authentic Irish pubs in New York City for over forty years.

He worked in the underground of New York, deep down in the sewers, and explored the darker sides of life as a poker dealer.

He has countered these subterranean and late night jobs with running an amazing 200,000 miles for an array of charities.

But, at the start and at the end, Tom is an Irishman, and a Fermanagh man.

And determined and fit as a fiddle at the spry age of 67, he shows no sign of stopping – except for those who want to hear of his story.

Tom's first tour stop will be at Gaelic Park in the Bronx on June 3, this at the behest of The County Fermanagh P & B Association of New York.

He will give a motivational speech on the war he waged with alcohol, and the tremendous efforts he made to overcome his demons.

Afterward, he will be available to sign books and there will be a screening of a recent documentary on Tom’s life entitled “Every Five Minutes.”

Donna Traynor of Donegal will be an honored guest as well, being awarded the John Joe McGovern Memorial Award.

A dance will be held starting at 8 p.m. Music is being brought in direct from Ireland, with Ally Harron and Marion Curry.  It is certain to be a memorable night.

July engagements will be in Carmel, New York with the Knights of Columbus, there will be a signing in Queens, and also one at the Black Sheep on Third Avenue between 38th and 39th streets.

Copies of Tom’s book, “The Black Sheep, The Fittest/Unfittest Bar Owner in New York,” will be available for purchase at all events.

This story first appeared in the Irish Echo. For more, visit their website here.