Meeting with J.P. Donleavy, author of "The Gingerman" 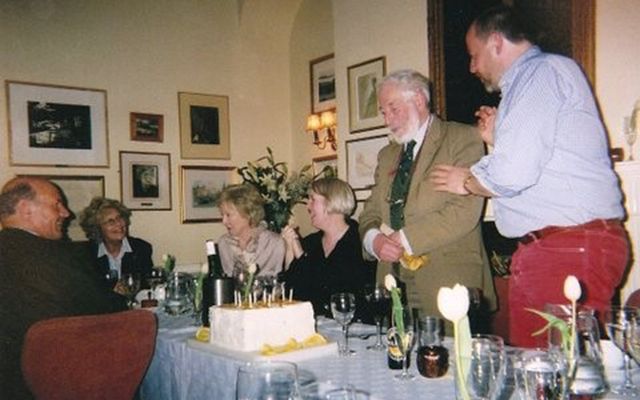 JP Donleavy, author of controversial 1955 book "The Gingerman", has died in a hospital near his home in Co. Westmeath, aged 91.

The day before we were due to fly home, we were sitting in a bar in Manhattan when my friend picked up a newspaper from a table and saw that there was a performance of “The Ginger Man” being performed at The Irish Arts Center.

We both loved the works of Donleavy and especially the novel which had been adapted for the stage.

So, we called the theatre and managed to secure the last two tickets.

And this was the closing night of the run.

We watched the riotously funny performance and thanked our lucky stars that we’d had the good fortune to see it - and in New York of all places.

This is where the coincidences started to happen.

The following day we were trying to kill time before we were due to catch our taxi to Newark Airport.

We ambled up Broadway and happened to stumble upon an old bookshop – the type with all the narrow corridors and those sliding ladders.

Not really intending to buy anything, I was just happy to browse – anything to get out of the unforgiving heat of the Big Apple.

Sensing that the proprietor was watching me, I blindly grabbed at the row of books directly at my eye level.

Then I looked at the book in my hand.

It was “The Saddest Summer of Samuel S” by J.P. Donleavy. I smiled to myself and marveled at the chances of that.

A couple of hours later, we were sitting in Newark Airport, bored witless.

The lift beside us suddenly opened and a man stepped out.

He looked, for all the world, like a weekend guest at a bygone shooting party in some grand manor house.

He was resplendent in his flat cap, Harris Tweed jacket, and highly polished brogues.

I did a double take immediately and followed him with my gaze as he moved in front of us.

I checked my playbill from the previous night and compared the image. It was him – it had to be him!

I didn’t have the nerve to approach him but my friend did once I’d pointed him out.

After a couple of minutes in conversation with the dapper gent, he waved me over.

Indeed, it was him.

We spoke for maybe a quarter of an hour. I’m sure I was just blurting endless questions at him, but he was extremely friendly and had such a wonderful voice that immediately put one at ease – a cross between Frasier Crane and John Houseman.

He explained that he was en-route to visit his sculptor daughter, Karen, in Idaho.

I asked him if he had heard The Pogues song, “A Fairy Tale of New York,” named after his 1973 novel.

He said he had and in fact, Shane Macgowan, whom he liked very much, was currently in New York.

I also asked him had he ever seen “Withnail & I?” He hadn’t, so I explained that Withnail was surely a latter-day Sebastian Dangerfield, the eponymous Ginger Man and just as rakishly funny.

He said in that case, he’d definitely watch out for it.

He asked us who we were flying with and when we told him Virgin Atlantic he laughed and shook his head, remarking on their choice of using “Upper Class” as an ego-building alternative to traveling in economy.

We spoke about county Westmeath in Ireland where he lived, a part of the country where my own Irish parents once had a house.

He graciously signed our playbills and shook our hands.

We were to meet him again at one of his paintings exhibitions in Dublin several years later and even go to his birthday party at The United Arts Club in Dublin and out on a raucous night of revelry around the city with his son Phillip.

However, on that day in Newark Airport we sadly watched him disappear into the crowd, and like Terence Mann, the reclusive writer from “Field of Dreams,” into the cornfield he went and a voice inside my head boomed:

J.P. Donleavy passed earlier this month at age 91. Terry Corrigan is alive and well and living in Manchester, England.