Irish American author JP Donleavy won notoriety with his 1955 book "The Gingerman" which was both burned and banned in Ireland. 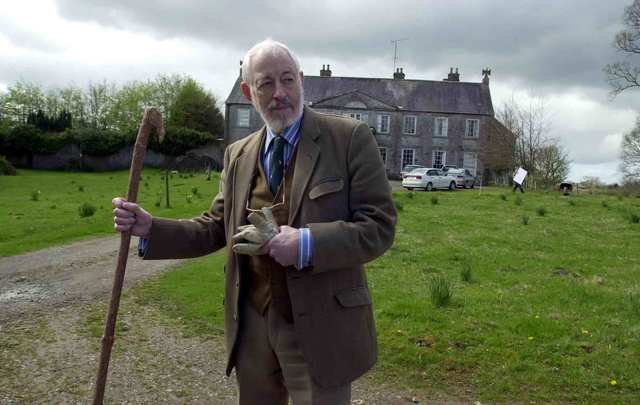 JP Donleavy, author of "The Ginger Man", outside his home at Levington Park estate in Co. Westmeath. RollingNews.ie

JP Donleavy, author of controversial 1955 book "The Gingerman", has died in a hospital near his home in Co. Westmeath, aged 91. His sister Mary Rita Donleavy confirmed that the expatriate American author, born to Irish parents in New York, died of a stroke on Monday, September 11, 2017.

His most famed novel "The Gingerman" drew moral outrage in Catholic Ireland and was burned and banned before eventually becoming a cult classic and earning public acceptance. The sexually frank and darkly humorous book, based on a character Donleavy met while studying in Trinity College Dublin, has since never gone out of print and is believed to have sold over 40 million copies.

Ireland's Minister for Culture, Heritage, and the Gaeltacht, Heather Humphrys, has paid tribute to the author who resided at Levington Park estate in Co. Westmeath from 1972 onward.

“Although a native of New York, JP was born to Irish parents," Minister Humphrys said.

"He took advantage of the G.I. Bill which allowed him to attend Trinity College, Dublin after serving in the US Navy during World War II.  He spent most of his productive years in London, the Isle of Man and here in Ireland.

Peter Smithwick,Marina Guinness and J.P Donleavy,at the launch of the fourth edition of Who`s Who in Ireland. Image credit: RollingNews.ie

“From his debut seminal work The Ginger Man in 1955, through to standout pieces including A Singular Man, The Beastly Beatitudes of Balthazar B and A Fairytale of New York, JP's body of work stands tall alongside contemporaries and friends such as Patrick Kavanagh, Brian O' Nolan (Flann O'Brien )and Brendan Behan.

“His honoring with the Bob Hughes Lifetime Achievement Award at the Bord Gáis Energy Irish Book Awards in 2015 is a testament to his strong contribution to Irish literature. Indeed, when one speaks of the iconic contemporary literature of the 20th Century, the name of JP Donleavy will never be far from the conversation.

How JP Donleavy was inspired at Trinity to write "The Gingerman"

Born James Patrick Donleavy Jr. in Brooklyn on April 23, 1926, the author grew up in the Bronx before serving in the Navy during World War II. Taking advantage of the G.I. Bill, he studied microbiology in Trinity College Dublin, where he met with Gainor Stephen Cris, a fellow student who would inspire the title character of "The Gingerman", Sebastian Dangerfield. The character has been described as everything from a clown to a monster.

Having lived in London and the Isle of Man, Donleavy returned to Ireland to live permanently in 1969 once the country had removed income tax for creative artists, including writers. He moved into his mid-18th-century estate in Westmeath in 1972, remaining in Levington until his death this week.

Donleavy's other works include "The Beastly Beatitudes of Balthazar B", "A Singular Man" and "A Fairy Tale of New York" but none ever reached the same notoriety as "The Gingerman" which the author had struggled to publish.

"The Gingerman" was initially refused by publishers in Ireland

It wasn't until friend and fellow Irish writer Brendan Behan suggests that Donleavy approach Olympia Press in Paris that the book was eventually put in print, although pushed out as part of a series that was known for erotica. Despite going on to write other successful books and plays, Donleavy described this moment as the "end of his career" making him known as "a dirty book writer out of Paris."

"The Gingerman" has yet to be made into a feature film version, although everyone from Robert Redford to Johnny Depp has announced that they were going to make an attempt.

Married twice, controversy arose in 2011 when Donleavy's second wife, actress Mary Wilson Price, revealed that neither of the two children she to gave birth to while married to the author was fathered by him. She revealed that during their 19-year marriage, which ended in divorce in 1989, she had affairs with Kieran Guinness, of the brewing dynasty, who father her daughter Rebecca Donleavy, and his brother Finn Guinness, who fathered her son Rory.

Price announced that she would reveal all in a memoir but not while Donleavy was still alive.

Author JP Donleavy has passed away at the age of 91. Best known for The Ginger Man, Donleavy was the recipient of an honorary degree in 2016 pic.twitter.com/H4DJMhnH5M

Donleavy also had two children, Phillip and Karen Donleavy, from his previous marriage to Valerie Heron which also ended in divorce in 1969. He is survived by them as well as several grandchildren.

When asked about his nationality, Donleavy would always class himself as American, according to the New York Times,  despite his Irish parents and the many years he had spent living in Ireland. A writer for The New York Times Style Magazine described him in 2014, however, as "an odd fish swimming the mid-Atlantic apart from all the usual schools of thought."

Have you ever read "The Gingerman"? Tell us your thoughts in the comments section, below.