He may have been the most famous Irishman of his generation, definitely the most controversial. 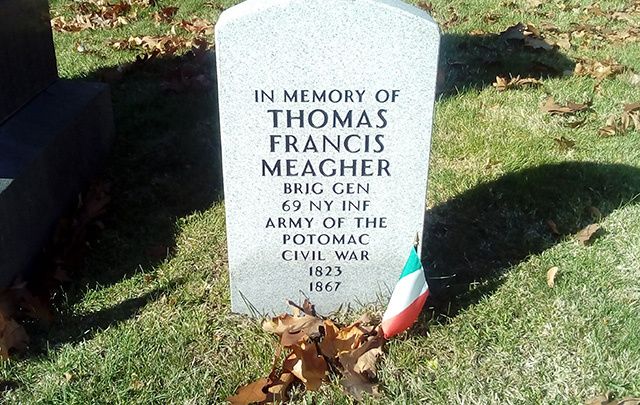 He may have been the most famous Irishman of his generation, definitely the most controversial. Born in Waterford in 1823, he would disappear in Montana 43 years later.

Thomas Francis Meagher was a lawyer, journalist, rebel, soldier, political prisoner, and his admirers have long wanted to erect a memorial to him in Brooklyn’s Green-Wood Cemetery.

They will see their dream realized this coming Saturday, July 1, the 150th anniversary of Meagher’s death.

Members of the Waterford Association, along with the Green-Wood Historic Fund are gathering at the cemetery for the unveiling of a bronze bust to Meagher.

Those who will be there to witness unveiling will include members of the “Fighting 69th” the U.S. army regiment forever associated with Brigadier General Meagher.

The memorial has been a long time coming and it will salute an extraordinary figure from both Irish and American history, a man who continues to generate headlines and books, the latest being the acclaimed biography by New York Times writer Timothy Egan, “The Immortal Irishman: The Irish Revolutionary Who Became an American Hero.”

Meagher’s greatest achievement, arguably, is that by example he persuaded so many recently arrived Irish to enlist in the Union Army during the Civil War.

In truth, though, and as the Irish Echo has previously reported, “Meagher of the Sword” had lived an amazing life before he even set foot in the United States.

An unlikely revolutionary, his father was a wealthy merchant who sent him to the Jesuit Stoneyhurst College in Lancashire where he picked up an upper-class English accent that often grated on his nationalist admirers.

But could he talk! Throughout his life halls would be packed at the mere suggestion of Meagher “speechifying.”

He made common cause with Thomas Davis, John Mitchel and other Young Irelanders who had grown tired of Daniel O’Connell and the system of patronage associated with his Repeal Association.

In their view, O’Connell had grown too cozy with the British Whig establishment. During a fiery speech in the midst of the Famine, Meagher refused to repudiate the use of physical force to repeal the union between Great Britain and Ireland. Hence, Meagher of the Sword!

After the failed Young Ireland rebellion of 1848, Meagher and his comrades were sentenced to death but later transported to Van Diemen’s Land (Tasmania).

Always a man for the grand gesture, he promised the sentencing judge, “My Lord, this is our first offense, but not our last. If you will be easy with us this once, we promise on our word as gentlemen to try better next time.”

Blessed with great charisma and romantic flair, Meagher married Katherine Bennett, the daughter of a convicted highwayman soon after arrival “on the other side of the world.”

A detail of Louis Lang’s 1862-3 painting of Meagher’s regiment landing in New York after Bull Run.

He eventually escaped to New York City where the Irish greeted him as a hero. He studied law and founded the weekly Irish News – a forerunner of the Echo – along with the radical Citizen with his fellow escapee, John Mitchel.

The comrades split at the outbreak of the Civil War. Mitchel supported the South while Meagher, who abhorred slavery, declared for the Union while imploring his fellow Irishmen to join him in a company of the New York State Militia, later to be called the Fighting 69th.

After some early successes he was promoted to Brigadier General and commissioned to lead the Irish regiment. At the bloody battle of Antietam in September, 1862, things began to go wrong for Meagher. Much of his force was decimated and he was blown off his horse. He was accused of drunkenness, a charge he bitterly denied.

This accusation resurfaced throughout his career, it being noted that he “kept the best table in the Union army.” However, in his defense, Meagher aroused much jealousy for he was a garrulous partisan man who made enemies easily.

A statue of Meager outside Capitol in Helena, Montana.

After the war, Meagher was appointed acting governor of the new Territory of Montana. He campaigned to have Montana achieve statehood but became embroiled in local politics when he freed an Irishman who had been sentenced to death by a group of vigilantes.

On July 1st, 1867, Meagher fell from a steamboat into the Missouri River at Fort Benton. His body was never recovered. Controversial to the end, it has been suggested that he was pushed by the aforementioned vigilantes, old Confederate foes or even English agents.

Some feel that despite his brilliance, Meagher never achieved his potential. Others count him as one of the great leaders of the Irish diaspora.

The Green-Wood Cemetery gathering, set for 1 p.m. on Saturday, will be a significant underpinning of that latter view.