The Co. Waterford-born Irish rebel and Union Army general may have lived just 43 years but he had an incredible influence on both sides of the Atlantic. 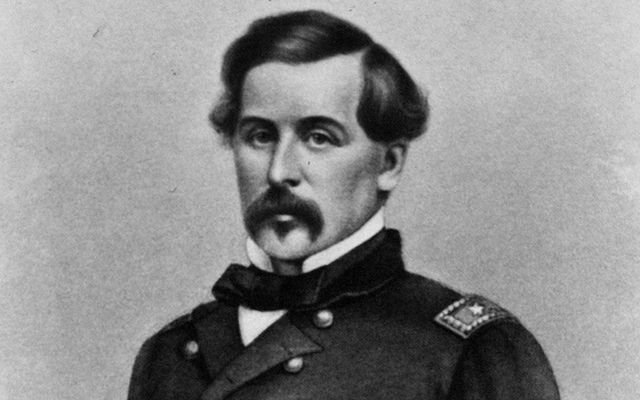 The life and legacy of famed Irish general Thomas Francis Meagher will be celebrated this weekend in Montana, the state where he held the role of Acting Territorial Governor for two years in the mid-19th century.

The Co. Waterford-born Irish rebel and Union Army general may have lived just 43 years before his mysterious death in the waters of the Missouri River but he had an incredible influence on both sides of the Atlantic, where he is being celebrated this year on the 150th anniversary of his death.

The community of Helena, Montana, will pay tribute to Meagher and his extraordinary life in MeagherFest, a three-day commemoration of the man attributed with the creation of the tricolor, the Irish flag of green, white, and orange, which he is believed to have first unveiled on March 7, 1848.

Irish nationalist and leader of the Young Irelanders during the 1848 rebellion, Waterford-born Thomas Francis Meagher was deported to Tasmania, Australia, for taking up arms against the British but longing for freedom once more he escaped to America.

After playing such an important role in Irish history, he was to force his way into the American history books once more, becoming a hero of the Civil War, a close friend of Lincoln’s, and fiercely anti-slavery.

Settled in New York, he worked as a journalist before joining the US army at the outbreak of the Civil War, rising through the ranks to brigadier general and notably recruiting and leading the Irish Brigade. Following the war, he was appointed acting governor of the Montana Territory but in drowned in 1867.

The main events will take place on Saturday July 1, the 150th anniversary of the day Meagher went overboard near Fort Benton, while sailing on the Missouri River. While there has been much speculation as to whether the Waterford man fell or was pushed from the boat by one of the many enemies he had amassed over the years, his body was never recovered, much to the dismay of his wife, who is buried in Green-Wood Cemetery in Brooklyn.

The New York cemetery will also be the site of another Meagher-related ceremony this Saturday as the County Waterford Association, along with the Green-Wood Historic Fund, will unveil a bronze bust of Meagher alongside the marker erected in his honor beside his family’s burial plot.

Back in Montana, Meagherfest will officially launch at 11.30 am just beside a statue of Meagher where vendors and exhibits will be present for the day.

“What could be a greater venue than on the Capitol lawn in front of Meagher’s stature?” said Mike O’Connor, president of the Thomas Francis Meagher Association.

“We want the whole family to attend and enjoy the events and hope that maybe they’ll learn a little too.”

“There’s so many myths and history surrounding Meagher,” O’Connor continued.

“We hope this event will help get out the true story of the man and how important he was. In his short 43 years, he had a real impact across three different continents.”

While the group expects as any as 500 people in attendance, a group from Waterford are also expected to visit the festival after their own Meagher celebration in March.

In his hometown of Waterford, the Irish Meagher Festival ran concurrently with Waterford’s annual 1848 Tricolour Celebration. A group of 20 from Montana traveled to share the experience, presenting the town with a Montana state flag as a gift from Governor Steve Bullock.

“Ireland was so impressed that we traveled to take part in their celebration that they wanted to be part of our festival,” said John Malia, board member on the Thomas Francis Meagher Association.

“It’s very exciting that our friends from across the pond are coming here,” added O’Connor.