A recently uncovered British army document reveals the army knew a bomb was intentionally placed in the entrance to McGurk’s Bar, despite what was previously claimed. 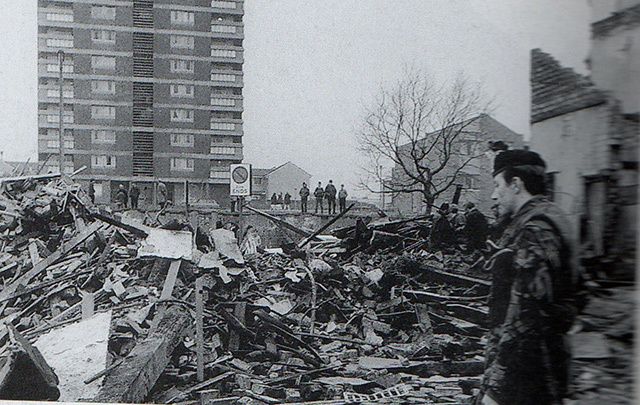 A British soldier surveys the aftermath of the bombing at McGurk's Bar in Belfast in December 1971. WikiCommons

A renowned English lawyer has described as “massive” a recently uncovered document into one of the worst atrocities of the Troubles in Northern Ireland.

Michael Mansfield QC was speaking at a packed event at St. Mary’s University College in Belfast, where families of the McGurk’s Bar bombing – which claimed the lives of 15 innocent people 45 years ago this month – gathered to be briefed about new evidence that has come to light.

The loyalist Ulster Volunteer Force bombed the Catholic bar in December 1971 but in the days after the bombing, the British army claimed it was an IRA own goal, implying that many of the victims were involved.

However, a recently uncovered British army document shows that the army knew in the immediate aftermath of the bombing that the bomb had been placed in the doorway of the North Queen Street bar with the intention to kill those inside.

He continued: “A document like this almost speaks for itself. It plainly shows RUC oversight, it is a false story being put out, that should be admitted and apologized for and should be the minimum basis for allowing either for inquest, or independent inquiry, which is what is being called for here.”

Robert McClenaghan, whose grandfather Philip Garry died in the bomb, said: “They buried this truth for forty-five years and said that my grandfather and the rest of the victims were bombers, members of the IRA building a bomb inside the bar that exploded prematurely. We have now got the categorical proof that everybody knew that our families were innocent.”

A mocked up bar front on the spot where the actual McGurk's bar was destroyed by a bomb in 1971, corner of Great George's Street and North Queen Street, Belfast. Image: WikiCommons.

Discussing the newly-uncovered document, McClenaghan added: “This document was uncovered by our friends in the Pat Finucane Centre. It relates to December 1971. At the same time as the McGurk’s Bar families were preparing to bury our dead, the state was preparing to bury the truth.

“In this document, the ATO (army technical officer) is convinced that the bomb was placed in the entrance on the ground floor.

“This is the key piece of evidence we have been looking for for so long. The blacked-out part is called a redaction.

“We asked, ‘After 45 years could you not show us what the redacted part is?’ And the reply from Headquarters Northern Ireland was, ‘This record is to be closed for 84 years for health and safety reasons.’

“We would respectfully ask, ‘The health and safety of whom?’ This is what national security versus disclosure is all about.”

Marie Irvine, whose mother Kathleen Irvine died in the bomb, said: “I was 22 in 1971. I came back from England for my mummy’s funeral, I couldn’t get a job because of the misinformation that had been spread.

“My father was also seriously injured, my sister was 13, my brother 16; my other sister was younger than me.

“My father couldn’t work again. My father called out for my mother every single night.

“Every single person here has been hurt by collusion, all their lives have been hurt, have been twisted because of misinformation and a hidden agenda. Please let him know the other side of this.”