The Irish Coast Guard is on standby to respond to any issues that occur within its region of search and rescue. 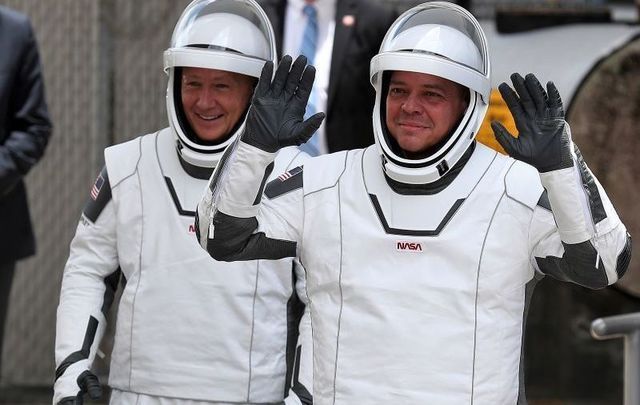 NASA astronauts Bob Behnken (R) and Doug Hurley (L) walk out of the Operations and Checkout Building on their way to the SpaceX Falcon 9 rocket with the Crew Dragon spacecraft on launch pad 39A at the Kennedy Space Center on May 27, 2020, in Cape Canaveral, Florida. Getty

Ireland is set to play a small part in the historic SpaceX rescheduled launch from NASA's Kennedy Space Center in Florida on Saturday afternoon.

The Irish Coast Guard is on standby to respond to any issues that occur within its region of search and rescue when the Crew Dragon spacecraft passes over Ireland on Saturday night.

Billionaire Elon Musk's private rocket company planned to launch the rocket from the space center on Wednesday but postponed the launch due to unfavorable weather conditions.

The 24-story spacecraft is now set to launch at 3:22 p.m. EST on Saturday afternoon when it will begin a 19-hour journey to the International Space Station. The Crew Dragon will launch from the same launch pad as the historic Apollo 11 mission.

We are ready for liftoff! Tune in today starting at 11 a.m. ET to watch live coverage of the launch that will return human spaceflight to U.S. soil for the first time since 2011. 🚀🇺🇸 #LaunchAmerica

Liftoff is slated for today at 3:22 p.m. ET: https://t.co/H0kcgIhtmj pic.twitter.com/KfUSgHhtQ4

Astronauts Doug Hurley and Bob Behnken will be onboard the spacecraft, which marks the first spaceflight of NASA astronauts from US soil in nine years.

This will also mark the first time in history that a private aerospace company carries humans into space.

However, NASA administrator Jim Bridenstine tweeted that there is a 50% chance of cancellation again since it is hurricane season in Florida. SpaceX has requested June 2 as a provisional backup date in case the mission is postponed again.

The SpaceX Falcon 9 rocket could be visible over Ireland if skies remain clear on Saturday night and is expected to pass over the country around 20 minutes after the launch.

NASA says that Ireland is one of the potential crash landing locations for the rocket if it is forced to abort its mission.

"Once liftoff occurs, the abort landing locations change with every passing second of flight, ultimately resulting in Crew Dragon requiring a potential landing off the western coast of Ireland."

At 21:30 the first launch of humans aboard a commercial spacecraft to the ISS will take place & the Irish Coast Guard is playing a very small part.

CG staff are on standby to lead the SAR operations for the @SpaceX space craft should it be forced to abort the mission. pic.twitter.com/fSTtmUEsZa

The astronauts could splash down around 40 miles off Skellig Michael in the Atlantic Ocean if the mission fails.

Astronomy Ireland is predicting that the spacecraft will be visible under the moon at 8:42 p.m. Irish time tonight.

8:42pm(in daylight!) CREW DRAGON passes near the Moon just 20 minutes after liftoff! Use binoculars.
It passes in front of the Moon (use binoculars or a telescope) as seen along a line from:
Galway City, to Athenry, to Banagher, to Mountmellick, to Glendalough, to Wicklow Town!