The Irish Coast Guard said it would have a "very small part" in tonight's SpaceX launch from NASA's Kennedy Space Center in Florida that was ultimately postponed. 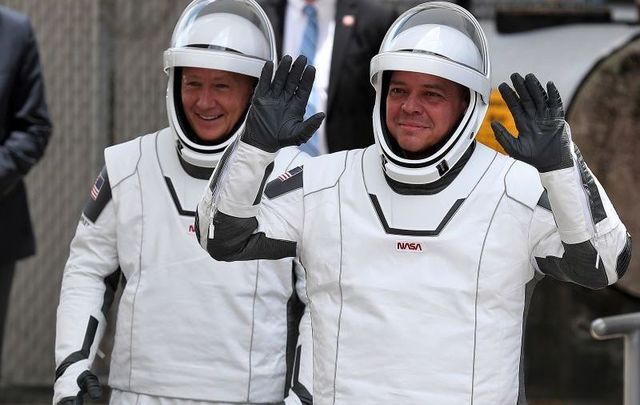 NASA astronauts Bob Behnken (R) and Doug Hurley (L) walk out of the Operations and Checkout Building on their way to the SpaceX Falcon 9 rocket with the Crew Dragon spacecraft on launch pad 39A at the Kennedy Space Center on May 27, 2020, in Cape Canaveral, Florida. Getty Images

Update 4:40 pm EST: The SpaceX launch has been postponed due to weather conditions. The next opportunity for the launch is this Saturday, May 30.

"We are not going to launch today."

Due to the weather conditions, the launch is scrubbing. Our next opportunity will be Saturday, May 30 at 3:22pm ET. Live #LaunchAmerica coverage will begin at 11am ET. pic.twitter.com/c7R1AmLLYh

Standing down from launch today due to unfavorable weather in the flight path. Our next launch opportunity is Saturday, May 30 at 3:22 p.m. EDT, or 19:22 UTC

The following was published earlier in the day on May 27:

The Irish Coast Guard is on standby for tonight's planned SpaceX launch of its Falcon 9 rocket from NASA’s Kennedy Space Station in Florida that’s scheduled for liftoff at 4:33 pm local time / 9:33 Irish time.

At 21:30 the first launch of humans aboard a commercial spacecraft to the ISS will take place & the Irish Coast Guard is playing a very small part.

CG staff are on standby to lead the SAR operations for the @SpaceX space craft should it be forced to abort the mission. pic.twitter.com/fSTtmUEsZa

According to the Irish Examiner, if today's launch does take place, the route will take the spacecraft along a corridor stretching thousands of miles across the North Atlantic in case the crew capsule has to break away from the Falcon 9 rocket in an emergency during its climb into orbit.

Astronomy Ireland predicts that the spacecraft will be visible over Ireland, just below the moon, at 9:53 pm Irish time tonight.

Astronomy Ireland is predicting that at 9:53pm the world's first privately built space craft will cross Irish skies, just below the Moon, 20 minutes after being launched from Florida.

Read More: Did you know that Michael Collins was the third man on the moon flight?

Tonight's SpaceX launch is the first manned mission to the International Space Station from the US since 2011. Astronauts Robert Behnken and Douglas Hurley will be aboard a Crew Dragon capsule, which will be launched into space by a Falcon 9 rocket built by Elon Musk’s SpaceX.

.@NASA astronauts @AstroBehnken and @Astro_Doug arrive at Launch Complex 39A ahead of launch of Crew Dragon pic.twitter.com/s7jxxoOPZI

NASA says tonight's launch will usher in a "new era of human spaceflight."

The Demo-2 mission is the final flight test for SpaceX and will validate the company's crew transport system and will also be the first time NASA astronauts will test the spacecraft systems in orbit.

Lifting off from Launch Pad 39A atop a specially instrumented Falcon 9 rocket, Crew Dragon will accelerate its two passengers to approximately 17,000 mph and put it on an intercept course with the International Space Station.

The hatch is closed. The crew is settled in. #LaunchAmerica is on. pic.twitter.com/qZTR3QAQjM

Once in orbit, the crew and SpaceX mission control will conduct performance tests onboard. Crew Dragon is expected to be in position to rendezvous and dock with the International Space Station about 24 hours after takeoff.

After successfully docking, Behnken and Hurley will be welcomed aboard station and will become members of the Expedition 63 crew. They will perform tests on Crew Dragon in addition to conducting research and other tasks with the space station crew.

Although the Crew Dragon being used for this flight test can stay in orbit about 110 days, the specific mission duration will be determined once on station, based on the readiness of the next commercial crew launch. The operational Crew Dragon spacecraft will be capable of staying in orbit for at least 210 days as a NASA requirement.

Upon conclusion of the mission, Crew Dragon will autonomously undock with the two astronauts on board, depart the space station, and re-enter the Earth’s atmosphere. Upon splashdown just off Florida’s Atlantic Coast, the crew will be picked up at sea by SpaceX’s Go Navigator recovery vessel and return to Cape Canaveral.

The Demo-2 mission will be the final major step before NASA’s Commercial Crew Program certifies Crew Dragon for operational, long-duration missions to the space station. This certification and regular operation of Crew Dragon will enable NASA to continue the important research and technology investigations taking place onboard the station, which benefits people on Earth and lays the groundwork for future exploration of the Moon and Mars starting with the agency’s Artemis program, which will land the first woman and the next man on the lunar surface in 2024.

NASA is providing a live stream of the lead up to tonight’s planned SpaceX launch, which you can tune into here: