The success of Virgin Galactic a real possibility of commercial space travel becoming a reality means Dr Norah Patten’s lifelong dream to travel to space will likely become a reality. 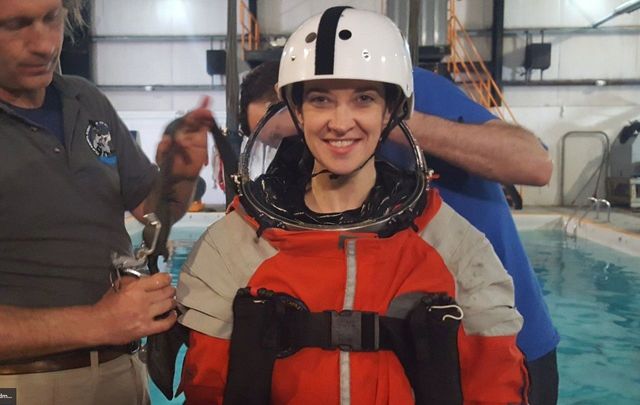 The success of Virgin Galactic a real possibility of commercial space travel becoming a reality means Dr. Norah Patten’s lifelong dream to travel to space will likely become a reality.

Richards Branson’s Virgin Galactic success in December 2018 has brought one county Mayo woman’s dream of being the first Irish astronaut that little bit closer to reality.

Dr. Norah Patten, from Ballina, County Mayo, has dreamt of traveling to space since she was 11 years old and visit NASA headquarters, in Cleveland, Ohio. Her childhood passion spurred her on to study aeronautical engineering and she later enrolled at the International Space University, in France.

Last December, Virgin Galactic launched its first flight beyond the atmosphere. Patten (35) believes this is a great step in the right direction of her life-long dream of becoming Ireland’s first astronaut.

Speaking with The Sunday Times (needs subscription) Dr. Patten said she is confident she will make the journey to space. She said, “It will happen…You just think ‘When?’.

The Mayo woman said “Commercial space travel has opened the whole thing up.

“It’s now more accessible and it’s competitive with all of these companies trying to get there which makes it more attainable, cost-wise.”

Patten has recently been taking part in intensive training, including a helicopter crash-landing simulation, and zero gravity flights through Project PoSUMM (Polar Suborbital Science in the Upper Mesosphere), at NASA, the first, and only, crewed suborbital research program.

She is the only Irish person of the twelve who have been selected for the highly sought after training program. The training will include vehicle (Egress), evacuation from the spacecraft, rescue and raft operations, sea survival, nominal and contingency operations, and spacecraft design.

Virgin Galactic aims to provide suborbital spaceflights to space tourists and suborbital launches for space science missions. One of these commercial suborbital flights begin, in earnest, Dr. Patten will be a candidate to travel to space as a scientist.

Patten told the Times “PoSSUM has good relationships with the commercial companies in America so my hope would be possibly with one of those suborbital companies, Virgin Galatic or Blue Origin, once they are able to go… it’s more realistic in terms of the finances that you need. You’re talking maybe €200,000 for a suborbital [flight] but to go to the International Space Station it’s about €50 million [per person].”

“There has never been an Irish person in space. I’d love to be the first, wouldn’t it be so cool? This is something I have been working on for so long. I’d like to make it happen for myself. It’s nearly become bigger than me.”

Dr. Patten spoke about that first trip to NASA, when she was 11 years old, that lit a fire in her imagination.

“I just thought ‘This is so cool’. We got to see the wind tunnels, the aircraft, all of those kinds of things,” she said.

“The exposure to something like that at that age was so important. Back then the standard career was that girls would go into the nursing and teaching, but this lit a spark in me for something completely different.

“When I was in school in 1990s Ireland, you’d say to people ‘I’m going to study aeronautical engineering’. There were eyebrows raised but that was stereotypes at the time, now we’re more aware of those biases.”

Patten’s first leap towards the starts started when she studied aeronautical engineering at the University of Limerick. She went on to work as an intern at Boeing, in Seattle, Washington. However, her hunger was not sated.

She said “Aero is not space, it’s aircraft, but it’s the closest thing you could get in Ireland.

“A lot of the astronauts that I admired when I was a teenager would have studied some kind of aerospace engineering.”

The Mayo women went on to complete a PhD at Limerick on wind tunnel testing and then on to the International Space University, in 2010, where she became a teaching associate.

Patten admitted that over the years she has spared her Ballina parents the more dangerous details about her rigorous training such as the most recent helicopter crash landing in water.

She told the Times about the experience:

“So, you’re strapped in a helicopter mock-up . . . you’re going down, you can feel the water coming up on you. You take your breath and you’re turned upside down. You go from being totally visual to solely using feel, that’s the only thing you have to get out.”

Here’s a video of Dr Patten speaking about her journey so far, in Nov 2018:

What do you think? If you had all the money in the world would commercial space travel be of interest to you? Would you like to see an Irish astronaut in space? Let us know in the comments section below.