Irish citizens were among the 12 migrants who were intercepted by US Border Patrol Agents in Minnesota after they illegally entered the US in September. 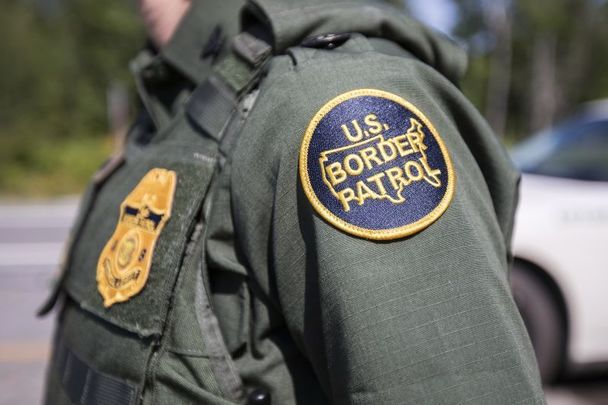 August 1, 2018: A patch on the uniform of a US Border Patrol agent at a highway checkpoint in West Enfield, Maine. The checkpoint took place approximately 80 miles from the US/Canada border. Getty Images

On September 25, a Border Patrol agent assigned to the Warroad Station in Minnesota was notified that two vehicles had made unlawful entry into the United States near Roseau, Minnesota.

Roseau is not far from the US - Canadian border.

The agent traveled south on MN State Highway 89 toward Grygla, Minnesota and observed two vehicles that fit the description of the suspect vehicles at a gas station in Grygla.

As the agent drove closer, one of the vehicles left the gas station.

The agent then made contact with the driver of the second vehicle that was still at the gas station.

Through questioning, the agent determined one of the migrants was a citizen of Great Britain and the other three were citizens of Ireland. All four were unlawfully present in the United States and taken into custody.

Information regarding the vehicle that left the gas station just before the Warroad Agent arrived was broadcasted throughout Grand Forks Sector.

The following day, on September 26, an International Falls Border Patrol Agent intercepted the vehicle at a restaurant in Bemidji, Minnesota. The vehicle was unoccupied when found, so the agent spoke with a front desk worker at a nearby hotel. The worker stated that a couple had recently checked in and left shortly before the agent arrived.

The agent located the suspects and made contact with a total of eight migrants with the assistance of the Beltrami County Sheriff’s Department.

Through questioning, it was determined that all the suspects encountered had illegally entered the United States. Seven of the migrants were citizens of Great Britain and one was a citizen of Ireland.

All the migrants and vehicles were transported to the Warroad Port of Entry for further processing. One of the vehicles was seized.

“This was a great response by our agents,” Chief Patrol Agent Anthony S. Good said.

“The communication and collaboration between two of our stations was the reason we were able to catch the migrants.

"As a reminder, it is unlawful to enter the United States anywhere other than a designated Port of Entry.”

Accorindg to Minn Post, data show the US Border Protection apprehended or expelled 916 migrants along the US-Canada border in the 2021 fiscal year.

Irish citizens can learn about the visa process to enter the US here on the US Embassy in Ireland's website.