Irish citizens living abroad cannot vote in Irish elections - here's how IrishCentral readers responded when asked if they should be able to. 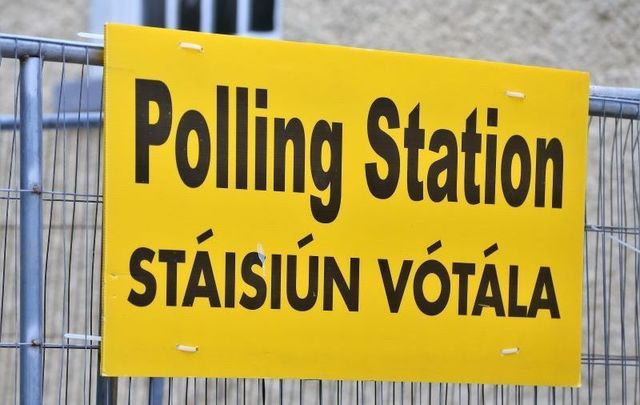 A polling station in Ireland in 2019. Should Irish citizens abroad be able to vote in Irish elections? RollingNews.ie

Our latest IrishCentral Readers Poll, which was live from May 27 - June 8, received more than 220 responses.

In it, we asked - do you think Irish citizens living abroad should have the right to vote in Irish elections?

Ultimately, the majority of respondents said that yes, Irish citizens abroad should be able to vote in Irish elections:

Respondents gave a range of reasons to explain their attitudes, many of which on both sides were compelling.

Plenty of respondents in the ‘Yes’ camp pointed to the emotional connection that Irish people abroad still feel to their homeland. Similarly, there were some responses that noted how many Irish abroad emigrated “out of necessity.”

Bizarrely, one respondent said that yes, Irish people abroad should have the right to vote, but "only blood Irish. Not recent people brought in from other countries and Muslims”

One of the most popular reasons given by respondents who believe that Irish citizens abroad should not be able to vote is that there should be no representation without taxation.

In the “not sure” camp, many people questioned exactly how voting could be extended to Irish citizens abroad since Irish citizenship can be rather easily attained through Irish-born parents or grandparents. Would it be right to extend an Irish vote to someone who has potentially never even been to Ireland?

Here’s a selection of some of the responses our latest IrishCentral Readers Poll received:

Yes, Irish citizens abroad should be able to vote in Irish elections

“My job as a Superyacht Captain takes me all over the world; being an Irish citizen who was born in Ireland, I have been disenfranchised by current rules. I am now also struggling to retain my driving license!”

“I live in the US. I am a green card holder but cannot vote here unless I am a citizen. I left Ireland many years ago and still have lots of family now. Right now I cannot vote anywhere. I would love to be able to vote on issues that affect my family in Ireland and as an Irish citizen believe that is my right.”

“Some would say, 'They don't pay taxes. They don't spend money in Ireland.' If that is the case, a lot of people should not be allowed to vote."

“Irish citizens abroad should be given the vote as it has disenfranchised emigrants who had to leave Ireland because of government failures. It shouldn’t be up for debate we are one of the only countries in Europe to not have this right. I recently saw queues outside the RDS for the Moldovan presidential election. We should embrace our diaspora like they are doing.”

“Because we are dual citizens and should be able to decide on who our elected representatives are.”

“Classless citizenship is an essential element of democracy and democratic rights”

“The country on my passport has, for way too long, been restricting my right to have a say in the governance of my country. Maybe it's due to a slight nervousness that us individuals who have been forced to immigrate may create a certain backlash to the ongoing, 'closed shop' of Irish political life.”

“It helps to keep the people who have moved abroad in touch and participating in Ireland democracy so that they can return n the future to a country that represents their views.”

“We also love and care greatly about what happens in Ireland!!”

“Many in professions or students may be outside the country for more than 18 months. If they still have Irish Citizenship and not given it up, they should be allowed to be "full" citizens and allowed to vote, no matter how long they are out of the country. If, and once they do give up Irish citizenship, or become "dual" nationals, things are different, and then they should NOT be allowed to vote in 2 or more countries a the same time.”

“Only blood Irish. Not recent people brought in from other countries & Muslims”

“Because we are citizens of the country and care about elections and referendums that affect the country's future and impact our family and friends back at home. For me personally, I plan to move back to Ireland in a few years so it's important for me to be able to have my say on things that will ultimately affect me down the line.”

“Because down through the years the Irish abroad contributed greatly to a saving financial input which kept the Irish Economy afloat, when there was very little work or future for the up and coming workforce. These times should not be forgotten, no matter where WE are in the world we are still IRISH, sometimes more IRISH than a lot of people who have never left home"

“Only on referendums to the constitution not in local and general elections as we do not pay tax in the country while working abroad!”

“Birthright; keeps the interest in Irish affair alive and voting would seem to encourage returning to Ireland at some point.”

"We could easily have a  Dail constituency with say 1-2 TD's that would represent those Irish born living abroad without distorting things in the Dail. There should be full voting rights for the presidential election as the head of state  represents us all.”

"Life experiences of irish living abroad should be capitalized on to help make Ireland truly representational of all its citizens; old as well as new.

"Platforming off the 'Aussie way' where Australian citizens face losing access to the right to vote if they fail to continue submitting  taxes would be an excellent incentive to ensure that connection. Drawing on & embracing the worldly life experiences that expats bring can only make Ireland even greater as a nation & shouldn't be denied that right to continue shaping their country of birth which is what denying the right to vote is doing.”

"Full participation by all Irish citizens no matter where they are. Why not have the election of  provincial TDs solely responsible for the Irish who live abroad?”

“I feel let down that I am no longer able to vote. I keep with current news and do plan to move home at some point.”

“Participation in political debate should not be solely determined by economic criteria such as 'paying taxes' which is so often proposed as an argument against Irish people living abroad voting.”

“Why not they could be working abroad but sending money back to the families. So still have a right to say who runs the country by voting.”

No, Irish citizens abroad should not be able to vote in Irish elections

“Because emigration is largely by the young, who won't have to live with the costs or consequences of the choices they can effectively impose from abroad on those living in this country.”

“Should be allowed for 5yrs after moving abroad, then no vote after that”

“No representation without taxation? If someone pays their main income taxes in Ireland perhaps voting could be considered. Not if they have dual citizenship - pick your main country and get that vote. Should only be permitted to born in Ireland citizens that lived there until min age 18, then only for 5 years post emigration unless they pay taxes (remain domiciled) in Ireland. Voting has responsibilities - you should bear the consequences and costs of your vote. Otherwise, it becomes a spectator sport.”

“You should be a lawful permanent residents were you vote.”

“If you leave the country of your birth, you should lose the right to vote.”

“I've never voted in Ireland. I left to work in Scotland and England when I turned 18 and from there emigrated to Canada 31 years ago. I have set up a new life for myself here and don't feel I have to right to vote as I have been longer abroad than in Ireland. Even though I don't live in Ireland I still consider it home and always will.”

“I am thinking that many of these people, like myself, are dual citizens via the foreign birth registration process, and pay no taxes. These factors, as well as a likely lower level of understanding of the realities faced by and needs of Irish citizens who live in Ireland full time, make it difficult to cast an informed vote in most cases in my opinion. This is not to say that I would very much like to vote in elections, however, I just don’t think it is fair to full-time resident citizens.”

“Most Irish Americans have a 'Quiet Man's vision of Ireland that is no longer true although it does bring the tourists like me back again and again. Let Ireland become a growing Ireland looking forward to the future instead of living in the past!”

“I left Ireland 1967 I do not know and would not know who any of the politicians are.”

“No Representation without taxation”

“Election results will have no impact on you. Vote where you pay taxes. Another lobby that will have too much to say.”

“It would give Irish citizens living outside Ireland too much influence and say in what happens over what happens in  the country they do not now reside in.”

“I left Ireland when I was 14 for London. I have been back a few times. Migrated to Australia in 1964, have been back on three vists since.  Any vote that I make in Ireland will have no effect on me in Australia, therefore I should not have the right to vote.”

“I emigrated from Ireland in 1956. I am now a US citizen. I vote in US elections and suggest that ex-pats that have only Irish Citizenship be allowed to vote in Irish elections. I consider Ireland my homeland and visit every five years.”

“Those absentees have chosen to remove themselves from Ireland for whatever length of time. They have no right to take part in the politics of a place they do not live in. When they return home, that privilege should be renewed.”

“I am an Irish citizen residing in the US. I don't have to live with the results of Irish elections. Only those who do should be allowed to vote.”

“I am an Irish citizen through my mother. I am a United States citizen by birth. I have lived my whole life in USA. I don’t think I have enough at stake to vote in Irish elections. However, if I was a person born in Ireland and have not become a citizen of another country, and am only temporarily living abroad, I should be able to vote."

“It depends on which class of "citizens" living abroad you're talking about.  I'm a US citizen born and bred that will be able to obtain Irish citizenship due to the fact that my grandmother was born in Cork. I have never lived in Ireland (other than 5 or 6 two-week vacations) and I should not be entitled to vote there.  Those who hail from Ireland and don't hold dual citizenship probably should be able to vote there.”

“It depends on the definition of citizen. Are all Irish Passport holders citizens?  If so this dilutes the informed vote and also dilutes the living with the ramifications situation. I'm outside of Ireland and will be and would love to have the vote but I di have to ask myself is this fair to Irish citizens resident there.”

“I think it would depend on whether or not they are living abroad temporarily.”