A new poll has found that the majority of voters in Ireland are in favor of allowing Irish citizens overseas to cast votes in presidential elections. 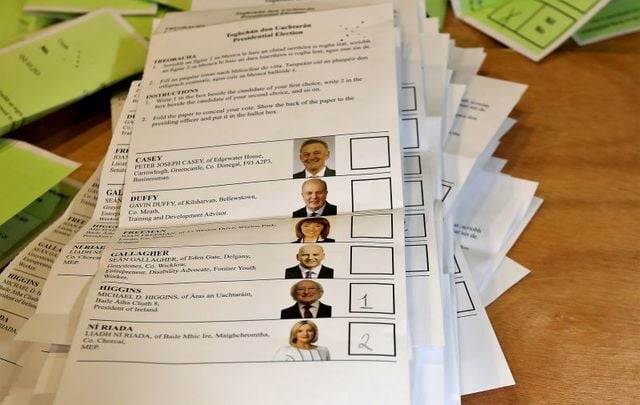 A ballot from the Irish presidential election in 2018. Should emigrants have the right to vote at home? Rolling News

The majority of Irish voters are in favor of Irish emigrants being allowed to vote in presidential elections.

55 percent of Irish voters support Irish citizens living abroad to be able to cast their vote in Ireland's presidential elections, according to results from an Ireland Thinks poll.

The poll found that support was strongest among citizens over 55 years old.

The poll also found that those in favor of the motion were likely to be unaffiliated to any political party or likely to vote for Sinn Féin or the Green Party.

On the other hand, those against the motion were likely to vote for Fine Gael or Labour, according to the poll.

Over 1,500 people were surveyed in the poll conducted just before Christmas.

Billy Lawless, Ireland's Senator for the Diaspora who lives in Chicago, commissioned the study along with VotingRights.ie lobby group.

The Galway-born businessman was appointed to the Irish Seanad in 2016 and is one of the biggest proponents for extending the vote in Irish presidential elections to emigrants overseas.

He said that the results of the poll should become part of any program for government when a coalition is eventually agreed upon.

Read more: Should the Diaspora have a vote in the Irish Presidential election?

"The old arguments are there of course but I’m delighted. I want this to be part of the program for government. Sinn Féin will certainly include it and the taoiseach, tánaiste and minister for the diaspora are hugely in favor of it.

"We are only one of three or four countries in Europe who don’t give citizens abroad a vote."

A similar poll was conducted by Claire Byrne Live/Amarach in December and it produced almost identical results.

The poll, which had a sample size of 1,000, found that 56 percent of voters supported extending voting rights to Irish emigrants, with 36 percent against and 8 percent unsure.

The age group most in favor of the motion was 25-34 with 68 percent support, according to the Claire Byrne poll.

In September last year, the Irish Government set up a referendum commission to advise on the upcoming ballot to advise on allowing Irish emigrants and people in the North to vote in presidential elections.

The Government also published a bill in the same month that would allow people based abroad to vote in presidential elections. However, that bill would have to be passed by the Dáil and the Seanad before it can go to a referendum.

The referendum was due to take place last year, but it was postponed due to Brexit negotiations.

Do you think Irish emigrants should be able to vote in Irish elections? Let us know in the comments