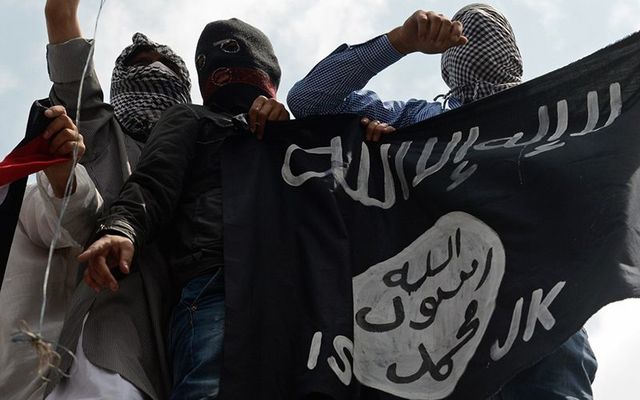 An Irish citizen was among five men arrested as part of an Islamic State cell raid. Foreign Policy / YouTube

An Irish citizen along with two US and two Pakistani fighters were arrested as suspected Islamic State terrorists by Kurdish-led Syrian Democratic Forces (SDF).

The Irish citizen and Irish passport holder is originally from Belarus. He had lived in Ireland in the early 2000s where he had worked in retail as a security guard in Dublin.

During that time the 45-year-old man was on a Gardai (Irish police) watchlist. Irish police had received information from a foreign intelligence agency that he was an active supporter of radical Islamist groups. He was placed on a watchlist and monitored by members of Ireland's Special Detective Unit.

The Irish Times reports that in 2013 he left Ireland for the Middle East. There he joined a group connected to the Islamic State. He went on to fight in the Syria civil war, which has to date claimed almost 400,000 lives and forced millions of people to flee their homes.

As yet it is not clear where and when he may have been radicalized. However, Irish security analyst Declan Power told RTE Radio One’s “Morning Ireland” that he doubts the alleged Islamic State member was radicalized in Ireland.

Ireland’s Taoiseach (Prime Minister) Leo Varadkar told the media “The information we have is that an Irish passport holder, an Irish citizen has been taken into custody and is being held in Syria. We don’t have the details of what, so I can’t comment on it in any detail.

“What I will say is that any Irish citizen around the world is entitled to consular assistance and will get that.”

As yet Ireland’s A Department of Foreign Affairs has not received any requests for consular assistance.

The SDF has issued a statement claiming it has arrested five men during an operation targeting Islamic State's last pocket of control in Northern Syria. According to the statement the arrests were made on Dec 30, 2018, during an operation to break up a terrorist cell which was preparing to attack civilians who were attempting to flee the war zone.

The statement from the SDF said “The operation Jazeera Storm, carried out with the aim of liberating the last regions under the occupation of ISIS, continues steadily towards clearing the last bastions of the group.

"ISIS, which is now cornered in a small area after being cleared from large swathes of territory it once held, is suffering heavy losses due to operations of our forces.

"Recently, in order to prevent the advance of our forces, terrorists have attempted to carry out attacks several times.

"In this context, a group of terrorists who had been preparing to attack the civilians who were trying to get out of the war zone in masses was detected.

"Following long-term technical and physical follow-up, an operation against the cell was carried out by our forces.

"As a result of the operation, five terrorists originally from the United States, Ireland and Pakistan were captured."

In the past, Ireland’s Department of Justice has estimated that 50 Irish citizens have traveled to Syria to fight in the civil war, which broke out in 2011. Many of them went to fight with extremist groups such as ISIS. At least three Irish citizens have been killed in the fighting.

Irish security analyst Declan Power, a former member of the Defense Forces, did say it was a matter of great concern that this now alleged ISIS member had obtained Irish citizenship despite being on a gardai watchlist.

He told RTE “We can’t be complacent about the reach of extremism into this State from other locations. It’s a wakeup call for us not to be complacent.”

Power added “It behooves us to look a bit more closely at how somebody was able to obtain citizenship if they were under suspicion of activities that would be damaging to this State and our partner states.

“We shouldn’t be entirely surprised that an Irish citizen has been found. It’s not that long ago since the death of Terence Kelly who was born and raised in Ireland who had gone off to throw in his lot with Islamic State.”

Terence Kelly (49),  was a former nurse from the Liberties, in Dublin, who was also known as “Taliban Terry” or “Khalid Kelly”. Kelly died after carrying out an Islamic State suicide bombing, in Iraq, in November 2016.

Power continued “What should be a matter for concern is that this individual is alleged to have come to Ireland from another State, settled here with his family and worked and obtained Irish citizenship.

“Somewhere along the line he came to the attention of the Garda Síochána’s crime and security branch apparently based on reports from external partner agencies.

“Maybe what we need to look at more closely is the level of scrutiny we can apply to somebody when they come to the State. If this individual managed to obtain citizenship and yet seemed to have been engaged in activities outside of the State before he came here, it raises questions that are worth asking because this kind of thing is not going to die off just because Islamic State, one iteration of extremism, is dying out, but extremism isn’t dead and gone with the death of Islamic State.”

The SDF, a coalition dominated by Kurdish fighters, has spearheaded the fight against Islamic State in Syria, supported by several Western countries including the United Kingdom. In December 2018 the international alliance seized the key Islamic State holdout of Hajin after months of fighting.

Also, in December 2018, United States President Donald Trump announced the withdrawal of around 2,000 soldiers from Syria, deployed to support the SDF. He claimed that Islamic State had been defeated.